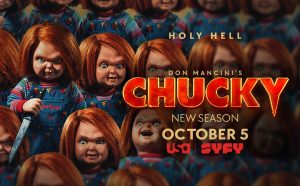 Whether you met killer doll Chucky (voiced in everything by Brad Dourif) in the CHILD’S PLAY films or their more playful but even gorier CHUCKY spinoffs, he was created by Don Mancini.

Mancini crafted the premise of the original 1988 feature film CHILD’S PLAY, wrote its sequels and wrote/directed all of the CHUCKY spinoff movies. Now he’s brought the maniacal toy, possessed by the soul of a serial killer, to Syfy and USA, where it’s become a cult favorite.

CHUCKY is in its second season on Syfy and USA Wednesday nights. It continues the plotline from the CHUCKY films, with Chucky able to put his soul into multiple dolls.

Teen Jake Wheeler (Zackary Arthur), his classmate/boyfriend Devon Evans (Bjorgvin Arnarson), and their friend Lexi Cross (Alyvia Alin Lind), all tormented and made orphans by Chucky in Season 1, have been sent to a Catholic reform school in Season 2. Chucky, of course, follows them there.

Meanwhile, Chucky’s sometime-lover, sometime-nemesis Tiffany is in the body of actor Jennifer Tilly (the real Tilly plays Tiffany-in-Tilly in the films and in CHUCKY), keeping up appearances in Beverly Hills while plotting against her ex.

At the school, Jake and the group’s new friend Nadine (Bella Higginbotham) try to “deprogram” Chucky and turn him into a real Good Guy, but can the results be trusted?

Mancini, who is also CHUCKY’s show runner and one of its executive producers, spoke with the press at a session hosted by Syfy for the Television Critics Association (TCA) Summer 2022 press tour. This article combines comments from that event with a later small roundtable interview. 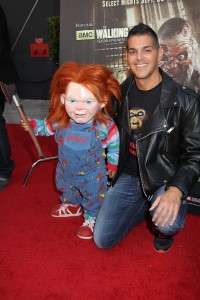 The first CHILD’S PLAY came out thirty-four years ago. How is Mancini keeping Chucky fresh for audiences in 2022?

“Through the good graces of our fans is the short answer,” Mancini replies. “We are very grateful to them. I think one of the most important aspects of the sustained popularity of the character is due to Brad Dourif and his performance, which is indelible. And the puppeteers, who are led by Tony Gardner and [mechanical puppet designer/animatronics designer/lead puppeteer] Peter Chevako, are amazing. They bring Chucky to life to such a degree that we on set can all take it for granted. He is just the kids’ co-star, Jennifer’s co-star, or the actor that me and my fellow directors are directing.

“But secondly, I think that CHUCKY works well as a television series, because for years, the films would already set the precedent of doing serialized, ongoing narrative storytelling. We have been spinning this continuous web over decades. So, to be able to do that now at an accelerated pace, and to go through eight hours of story per season, that’s really exciting. Because it allows us to get more into characters’ history, and relationships, and go down different avenues and explore characters that fans have been wanting to know more about.

“And I also think that the YA element is a good fit for CHUCKY. Because aesthetically, we love to do over the top stylistic, grandiose, visual stuff. I think that’s the way teenagers’ emotions work. Teenagers’ emotions are over the top and big. That’s how you experience things when you are a teenager. Everything is incredibly vivid. So, I think that our franchise is a great fit for that.”

Originally, Mancini says that Jake, Devon, and Lexi were not intended to be continuing characters. “When I first pitched the show, I pitched it as more anthological, where the idea was that Chucky and Tiffany and these so-called legacy characters would remain consistent, but that there would be a different group of innocents to bedevil each year. But while we were shooting Season 1, we all got very attached to the kids, both their characters and the actors themselves. And of course, part of what people love about television is, you bond with the characters. And so, even while we were just shooting Season 1, we had that expectation – “People may really like these characters, so maybe we want to bring them back.” And that’s exactly what happened. So, it’s really just a testament to them, to Zack and Bjorgvin and Aly, and how great they are, that they just made themselves indispensable.” 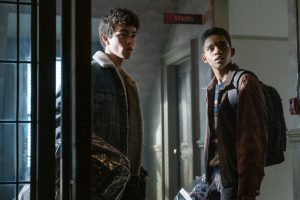 Zackary Arthur as Jake Wheeler, Björgvin Arnarson as Devon Evans in CHUCKY – Season 2 – “The Sinners Are Much More Fun” | ©2022 Syfy/Rafy

Deciding to set Season 2 in a Catholic reform school, Mancini adds, is based partly on his upbringing. “As a kid, I was raised Catholic, although when I was in eighth grade, I was sent to an Episcopalian school. Which was interesting, because it was really when I went to that school that I learned about aspects of the Catholic church that I actually hadn’t been apprised of. For example, the concept of transubstantiation, which is the Catholic belief that during the Mass when the priest blesses the host and the wine, it literally transforms into the flesh and blood of Christ. I was like, “Wait, we are supposed to believe that?” I just found that fascinating. It is an interesting aspect of, I suppose, any religion.

“But any religion, I think, presupposes a belief in the supernatural. And so, to have CHUCKY intersect with that, I think, is interesting. One of the things we have found is that Chucky often is at his most entertaining when he is subverting the status quo, and/or going after authority figures, and puncturing that kind of unthinking confidence, or hypocrisies of people or institutions can have. So, it is a fun arena to set Chucky loose in.”

The October 26 episode, “Death on Denial,” was a break in the CHUCKY format. A framing device is introduced, with Chucky hosting his own talk show. We don’t see the teen leads at all. Instead, we see Tiffany hosting an eighteenth-birthday party for her now-human/formerly doll twins, Glen and Glenda (both played by Lachlan Watson). Guests include Tilly’s BOUND costars Gina Gershon and Joe Pantoliano, plus Tilly’s real-life sister Meg Tilly, as versions of themselves.

“So, I’ve been thinking about bringing them back for a long time, and then once we relaunched the franchise as a TV series, and fortunately, knock wood, it worked out, people liked it, I knew that this was the best opportunity to do that, because we have so much time. In this season, we have eight hours of story to tell. And I’m really excited for people to see Lachlan Watson as Glen and Glenda, because they’re just amazing.”

Where does Chucky’s talk show in “Death on Denial” exist within the reality of the rest of the series?

“Last year, we had experimented with Chucky breaking the fourth wall at the very end of the finale,” Mancini explains, “and people really seemed to like that. That’s an aspect of Chucky that people really like. He’s interesting, in that he works as the fictional Chucky that we all know and love to hate, but at the same time, I think, over the years, Chucky’s appeal has also gotten meta, in that people are really interested in seeing the puppet behind the actor behind the role,” he laughs. “There’s no easy answer about, where does [Chucky’s] TV show exist in the real world. I guess it does. I just wanted to be playful, and I thought that the idea of doing a whole episode, a la TALES FROM THE CRYPT, where Chucky hosts the episode and bookends it.”

As to the body of the “Death on Denial” episode, Mancini elaborates, “It was really just about wanting to do something different. The reintroduction of the characters of Glen and Glenda, which largely takes place in Episode 4, that was a big thing to do. So, it seemed right, after three episodes focusing on the kids, to check in on what’s going on at the West Coast in Beverly Hills at Jennifer Tilly’s house, and just spend an entire episode there. I liked the experimental aspect of that, and the studio was really down with that as well.”

But we only see Chucky in the bookends of the episode. “We also wanted to address that very phenomenon, which Chucky does at the end, when he is sitting there and says, ‘Oh, the network’s concerned that people may be missing me in action, and miss hearing my ten allotted F bombs. So, let me accommodate them.’ That was fun to do.”

What are Mancini’s favorite memories of the CHUCKY franchise? “I have a lot of great memories. But I think if we are mostly focusing on Season 1 here [to avoid Season 2 spoilers], one of my favorite moments from season one was the Jake/Devon kiss. That was something we planned, and talked about a lot, and worked on, and – it was very nervous energy on the set that night. They did such a great job and had us all crying when that happened. Just knowing that that went over so well, and the characters and that relationship [have been] embraced by the LGBTQ community, that really meant a lot to all of us.”

Chucky’s look sometimes changes, Mancini notes, “because sometimes we need to change his look to suit certain specific story elements that we might have in a specific movie or a season of the TV show. That accounts for the slightly altered looks from season to season, year to year. It is all very deliberate.”

For those who actually want one in their home, are Chucky dolls commercially available?

Mancini laughs. “Let’s go to the most important answer, yes, very available in stores. Go get your CHUCKY merchandise now, available in all Hot Topics and Spencers and any Universal Studios.”

Unlike most writers for features and TV, Mancini owns a piece of his franchise’s merchandising. “I was lucky to have a friend that is a lawyer at the Writer’s Guild. When I was writing that [original CHILD’S PLAY] script, he urged me to describe Chucky very specifically. ‘Because in the unlikely event that it becomes a hit and a thing, you want to be able to be the legal creator of that character.’ So, I said, ‘Okay, two feet tall, red hair, blue eyes, freckles, blue overalls, red sneakers.’ All of that. But there’s something relatively generic about that description. David Kirschner, who has been our producer on all of the movies and on the TV series from the beginning, he is also a very talented artist. Based on my description, he codified the look of Chucky that you see here sitting next to me.” Mancini indicates the innocent-looking Chucky doll next to him on his office sofa. It’s just sitting there. But that’s what Chucky dolls do, pretend to be inanimate objects until it’s time to strike …