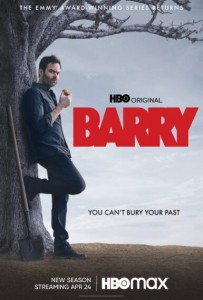 BARRY, HBO’s dark comedy about a hitman who wants to be an actor, returns for its third season on Sunday, April 24. Bill Hader, who co-created BARRY with Alec Berg, stars as the title character. Hader has won two Emmys so far for his portrayal.

Gene used to think of Barry as merely eccentric and vulnerable, but by the end of Season 2, the acting teacher has been told that Barry is a killer and is strongly inclined to believe this is true. If the trailers are any indication, Gene is seriously worried by the start of Season 3.

Due to COVID, there was a much bigger gap – three years – between Seasons 2 and 3 than anybody planned on. During that time, the creative team wrote Season 3, then wrote Season 4, then rewrote Season 3 so that it would better lead into Season 4.

During the break in BARRY seasons, Winkler has appeared in the feature films PINK SKIES AHEAD, THE FRENCH DISPATCH, and FAMILY SQUARES, contributed his voice talents to a number of animated projects including the Disney+ series MONSTERS AT WORK, and with Lin Oliver, written the children’s book trilogy ALIEN SUPERSTAR.

This interview with Winkler about BARRY combines a one-on-one discussion with the actor at a party thrown by HBO parent company Warner Media for the Television Critics Association back in the summer of 2019, and Winkler’s replies during an online Q&A for BARRY with the creators and fellow cast members, arranged by HBO for the Television Critics Association in early 2022.

For starters, Winkler says he’s perfectly happy to have won his Emmy at this stage of his career. “All that matters is that I won.” 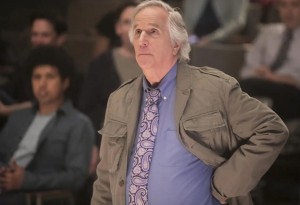 Are any of Winkler’s old teachers calling him up to express their views on how he is depicting their profession? “No, not one.”

Winkler believes that Gene, whatever his missteps, is sincere about his approach to the art of teaching acting. “Gene tries to be the best teacher he can be.”

As for Winkler teaching acting himself, “I have had the experience of five times holding master classes, and it is one of my favorite things. I’m not sure I know what I’m talking about, but whatever I’m feeling about what the actors in front of me are doing, it is my pleasure to try and get them to taste something different than they came into the room with, just by pushing them a little bit. So, it goes back and forth. I take Gene with me, and I bring Henry to Gene.”

There was an ad campaign, complete with phone number, for BARRY that featured Winkler as Gene on posters along the New York City subway system, urging people to contact Gene Cousineau for acting lessons. Winkler says he thought the campaign was amazing. “I thought it might have been the best campaign I’ve ever been part of, and I did the voice for the phone number, so if you called the phone number, you literally heard me talk to you. I was so proud, because I took that subway for the greater part of my life before I came to Hollywood. I was so thrilled to be part of that campaign.”

What else would Winkler like us to know about BARRY Season 3? “I cannot tell you how much fun it is to do BARRY. And we are so proud of the new season.”