THE FLASH: Actor Victoria Park on Season 7 of the superhero series – Exclusive Interview 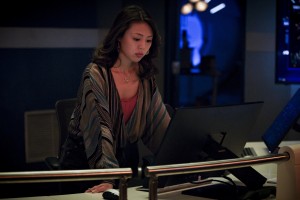 THE FLASH is now in its seventh season, Tuesday nights on The CW. Grant Gustin stars as Barry Allen, whose day job as a Central City police forensics expert masks his secret identity as the speedster superhero of the title.

Some of Barry’s friends in THE FLASH, based on the DC Comics series, are also powerful metahumans. This includes Barry’s tech genius friend Cisco Ramon. Cisco has gained, lost, regain, relost andas of lately techno-regained his powers as Vibe, with the ability to “affect the vibrational energy of reality” (per the ARROW-verse Wiki).

Victoria Park joined the cast of THE FLASH in Season 5 as photographer/former bartender Kamilla Hwang. Kamilla has since become romantically involved with Cisco, and is now considered a part of Team Flash. Over time, we have seen that there are other versions of Kamilla in multiple dimensions (the storyline in THE FLASH also encompasses other versions of Earth and diverging timelines).

Park, originally from Chicago, has produced and directed several short films and is currently preparing to make a documentary. Her other acting credits include the miniseries BENT, BUNHEADS, RUN DMZ, CAVEMEN, YAPPIE, and PLUS ONE. Park was also a regular in the underappreciated series SWEET/VICIOUS, in which she played a sorority sister who is unaware that one of her housemates is a masked vigilante who goes after campus rapists.

Regarding SWEET/VICIOUS, Park says, “That was such a good experience. I loved being on that show.”

In an exclusive phone interview, Park discusses her role on THE FLASH.

ASSIGNMENT X: How did you get involved in THE FLASH? 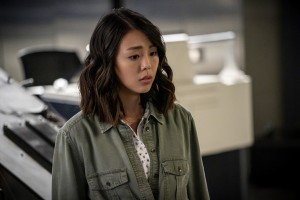 VICTORIA PARK: Just like every other job, I got an audition from my team. I almost didn’t make the audition. I had this vacation planned, and I was rushing from the airport to [the casting meeting]. I made it, and then it just went really quickly, the whole process. I saw the character, I felt like I was the character, I felt like I did a good job and was pretty confident about it. And then a few weeks later, I [got the job].

AX: Does Kamilla exist in the FLASH comics, or is she original to the TV series?

PARK: She’s original to the TV series, which has been really [creatively exciting].

AX: Have you had a degree of creative freedom in creating her? That is, have you talked to your castmates who are playing people from the comics, who are saying, “Well, I do this, because in the comics, my character does this”?

PARK: Yeah. There’s definitely more creative license. She’s just created from the writers and me and that’s it, and there’s no going back to the comic book or anything like that. I think that it would be really cool to play a character in the comics, but I think there’s also a huge responsibility with that, making sure that you do the comics the proper service, and don’t upset the fans, and all of that. So, it’s really fun to play someone that’s just from the writers’ imaginations.

PARK: I actually can’t remember. I know she was written to be Asian, but I don’t remember what her last name was. I do know that, after I got the role, they changed her last name to a Korean last name.

AX: Kamilla is a photographer, so did you already know how to take pictures, or did you do any research into being a photographer?

PARK: I’m actually a hobbyist photographer, so I wouldn’t say that I’m as good as Kamilla, or would be able to do it professionally like she does, but I know my way around a camera [laughs]. Knowing how to hold the camera, or I guess coming off as a photographer, definitely helps. But Kamilla’s camera is pretty tricked-out with some superhero gadgets, so I had to use my imagination for that stuff.

AX: Does the director or the props person say, “Okay, this button does this,” or do you just figure out how it works on its own, and then that’s the canon for the camera? 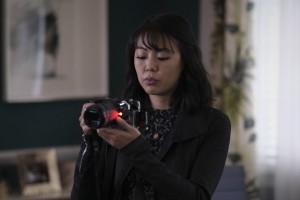 PARK: The props team designs the camera, and then brings it to me, and we talk about it, and we talk about what works, and what doesn’t work for me. And then usually, between the two of us, we figure out what’s realistic, or works for the scene. It’s a team effort.

AX: Did you have to do any other kind of research in order to play Kamilla?

PARK: Not really. The thing about Kamilla is that she comes in and she knows nothing about Team Flash, and she learns as the show goes on. The ARROW-verse is such a huge universe, and so, for me to not know everything kind of worked for my character, so I didn’t have to do as much research on my own, although I did, because I was just interested in the show, but it didn’t really go towards my work.

AX: Kamilla is in a relationship with Cisco, so did you and Carlos Valdes go sit down and talk about your characters, or did you just hit the set and go from there?

PARK: Our first day working together was the first time that the two characters meet, and so, we just hit the ground running. We met, we said, “Hi,” we didn’t talk much. And from the first day, it wasn’t clear how long the character [Kamilla] was going to be on the show. I believe I only had two episodes when I auditioned, and that was turned into three seasons. So, we did have the chance to work on the relationship as the characters, and as we worked on our friendship as people. So, I think it’s grown pretty organically. There are a couple moments in there where we might have worked on some details, but other than that, it’s just been really organic, and I feel like our friendship and our chemistry is showing up, and trusting that just worked out for us.

AX: Does Kamilla just exist in multiple dimensions, or also in multiple timelines? It can get a little confusing …

PARK: The show has both, so I think that’s what is confusing, but Kamilla only exists in multiple dimensions, not multiple timelines, as of now.

AX: Do you play the different versions of Kamilla in different dimensions differently from one another, or is she pretty much the same wherever she goes?

AX: Do you have favorite scenes or episodes in what you’ve gotten to do? No spoilers, but just in what we’ve already seen?

PARK: One of my favorite scenes was last season [Season 6], Episode 5, was Cisco’s big episode. It was a film noir episode, it was a big episode for Kamilla and Cisco, because it was the first time that they wanted to tell each other they loved each other, and so it’s a really, really fun episode. I got to work with Danny Trejo [who guest-stars as interdimensional bounty hunter Josh], who I love, and it was all-around a great experience, so I would probably say that was my favorite episode to shoot so far.

AX: THE FLASH is a very physical show, people are running a lot, they’re throwing things, they’re getting knocked down. So, have you had to do any kind of physical training for any of that?

PARK: No. We have an amazing stunt team, and they do all the difficult stuff for us, and then we just kind of go in and finish it at the end and make it look like we’ve been there the whole time. But our stunt team do all the hard work for us.

AX: THE FLASH shoots in Vancouver. Are you familiar with Vancouver, is working in Vancouver new and exciting …?

PARK: Yeah. My first time in Vancouver was my first episode, so that was back in late 2018, and I just fell in love with it. Most people in L.A. have a love/hate relationship with Vancouver because of the weather, but I’m from Chicago, so the weather is nice to me [laughs], the winters are mild, and I love it, I’ve really made it my second home.

AX: For this season, Season 7, did you have to shoot with COVID protocols?

PARK: Yes, we did. We weren’t able to finish Season 6, so we bumped those last three episodes to the beginning of this season, and we’ve been shooting since September [2020] with the COVID protocols. It’s different – there are things that I miss about pre-COVID days – but I’m honestly just grateful that everything’s safe, and that we’re getting to work at all, and to have a job, that’s been a blessing, and to be able to see my friends, the cast and crew on set, that’s been a blessing as well.

AX: If Kamilla did get powers, what sort of powers would you like her to have?

PARK: Honestly, I really like the good [as opposed to evil] powers, which is Vibe. So, I don’t know if it would work for us to have the same powers, but I think that his powers are great.

PARK: I’m working on a personal project that I’m directing, a documentary that will hopefully film this summer, and other than that, just doing THE FLASH.

AX: What’s your documentary about?

PARK: It is about my dad, and his story of immigrating to this country, and he has a really interesting profession. He is a reptile breeder, and he’s opening the world’s largest reptile zoo this summer. So, it’s a very personal project for me. I think that it’s really important to keep the stories of our elders alive and well, and with COVID, and with the older generation passing away, it’s so important to keep those stories going.

AX: Do you have a favorite reptile?

PARK: I love tortoises. They’re my favorite. They’re so cute, and my dad has so many different kinds.

AX: And what would you most like people to know about your work on THE FLASH?

PARK: I think I would just like people to remember that Kamilla is a real person, and I feel like she’s a good person. I feel like all of the decisions she makes are for the good of other people that she loves, and for the good of the whole, and I think that’s really good for all of us to take in.