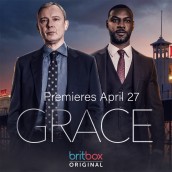 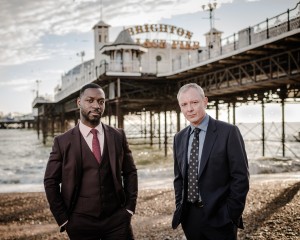 GRACE is based on the award-winning, long-running series of novels (seventeen and counting) by prolific author/producer Peter James, who serves as an executive producer on the TV series. The novels and TV edition revolve around Detective Superintendent Roy Grace of Brighton, England. Grace works on solving both new crimes and cold cases while continuing to investigate the sudden, unexplained disappearance of his wife years earlier.

Speaking by phone from Jersey in the U.K.’s Channel Islands, James talks about his research for the Roy Grace books, and the character’s long journey from page to screen.

ASSIGNMENT X: Is it correct that you had a long career as a producer and a screenwriter before you started as a novelist?

PETER JAMES: It is correct, yes. For a time, I did a mix of low-budget horror movies [and higher-end fare]. The last one that I was responsible for were in 2005 [IMDb credits James as executive producer with THE LAST SIGN, GUY X, BAILEY’S BILLION$, BEOWULF & GRENDEL, and THE RIVER KING for that year, as well as 2006’s PERFECT CREATURE]. But I had my current writing career intermittently.

AX: Is the first GRACE telefilm based on the first book in the series?

JAMES: It is. There are currently seventeen books in the series, and the eighteenth is on its way. The ITV plan is to do each of the books in the sequence. Although you can watch any of them, or read any of the books, in any order, there is a kind of running back story that develops through the books and the television [adaptation].

AX: Russell Lewis is credited with writing the scripts for GRACE. Since you’re an executive producer on the show, and you’ve also been a screenwriter, did you have the option to write the scripts yourself?

JAMES: No, I didn’t. I didn’t want to, because we’ve had a very long history, bringing this to television. Because of my own background as a film and television producer, I know how unusual it is to get [a project] picked up. I’d written a lot of novels before I wrote DEAD SIMPLE. When I created Roy Grace, I really felt it was quite special, and I thought it was, first of all, the best thing that I had done, and I really didn’t want it to get made in any other way than the vision I had for it.

AX: When did you initially write DEAD SIMPLE? 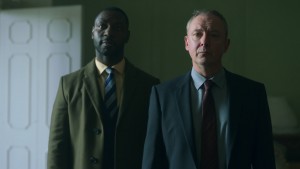 AX: So, you’ve been living with this for quite a while.

JAMES: Yes. When the book came out, we had a lot of interest. I said to my then-agent that I didn’t want to let the rights go unless I could have control of it. I did actually write the first draft then, and I got about halfway through, and I thought, I should write more of these people and these books, and instead [of doing that], I was doing the script of my own novel. From that point on, [James began concentrating on the novels].

But [GRACE the series] went through periods of different incarnations. I hadn’t been happy with any of them. The first production company had the rights for about three years. I got a phone call from them. They said, “Great news, BBC Scotland wants to put up the money for us to do it.” I said, “Why does BBC Scotland want to [do a series] set in the south of England?” And he said, “Oh, they’ve had an interesting idea. They’d like to do it in Aberdeen [Scotland].” I said, “Has anybody there actually read the books?” “Yes, yes, it could be transferred to Aberdeen.” I said, “What I think about that, my idea is Foxtrot Oscar [military slang for the letters F.O.].”

And then about three years later, another company had it, I got another extraordinary phone call. “All these Scandinavian dramas, the common denominator is a very strong female detective. What about making Roy Grace female?” That got another “Foxtrot Oscar” from me [laughs].

In 2016, I met up with Andrew O’Connor, an old friend of mine. We’d worked together on a couple of television shows, and I knew he was a big fan of my books. He asked how GRACE was going in development, and I said I wasn’t happy. and I said, “I feel I need a hand with producing.” We went to ITV and met with [executive] Polly Hill. I really respected her as a producer.” She’d made THE NIGHT MANAGER, which I thought was fantastic, and she’d just moved to ITV, and it turned out she was a fan of Roy Grace, and she said, “Yeah, if we can get the right writer – there’s one writer I think you should use, and that’s Russell Lewis.”

She set up a meeting, and Andrew and I met with Russell. Andrew [had known] him as a child actor. It turned out that they had been to the same acting school at the same time, when they were about thirteen years old. And I just loved what Russell had to say about [the books]. We worked very closely together, he ran every change he had to make by me, and I felt very comfortable moving forward.The only problem was, that was 2018. And Russ said, “I would love to do this, but I’m committed for two years to write another seven ENDEAVORs.” We had to wait for two years for Russell to be free, and I’m so happy that we did.

AX: What made everybody involved feel that John Simm was the right actor for Roy Grace?

JAMES: When I created Roy Grace, I modeled the character on a couple of people I’d known. I’d seen John in a couple things, and he was very much my mental image of Roy Grace, right from the very start. And when we got to the point where ITV were looking for the lead actor, they came up with a bunch of different names, and John Simm was at the top of that list. I said [yes], not only because Roy Grace looks like [Simm], but because Roy Grace is based on a real-life detective who I had met back in 1997, and is now my best friend today.

What happened was, I started writing spy thrillers back in the early 1980s. And they weren’t very good, and they didn’t sell. And then I got burgled. I’d just got married, and the young detective came to take fingerprints, and he saw my early books, and he said, “Oh, if you ever want to do research help about the police, give me a call.” And he was married to a detective. My former wife was a lawyer. And they invited us to a barbecue at their house, and they had a dozen of their friends there, and they all were cops: homicide detectives, response, neighborhood policing, traffic. And just talking to these guys, I thought, “Wow. From a writer’s standpoint, there’s nobody who sees more of human life in a thirty-year career than a police officer.” And that was the start of my interest.

When [the police officers] realized I was genuinely interested, over the next three or four years, they started inviting me out [to observe them on] response shifts. It got to a point after a few years where they’d phone me up and say, “We’re doing a raid tomorrow morning, do you want to come along with us?” I was writing psychological thrillers at that point – I started putting police characters more and more into my writing.

And then, in about 1997, [the original burglary detective] said, “There’s a very interesting homicide detective [Dave Gaylor], who I think you’d get on with.” And I went to this guy’s office, and I’ve never seen an office so untidy. Every inch of it was covered in plastic crates, bulging with manila folders. And I said to him, “Are you moving?” He said, “No, I’m a homicide detective, so I’ve just been tasked with reopening all the unsolved murders in the county of Sussex, to see if we can use the latest advances in forensics, DNA, fingerprints, technology, to move any of these forward, if there’s somebody who’s still alive who could benefit from the investigation, or a perpetrator who might still be around. Each one of these crates contains the principal case file of an unsolved murder, and the last chance each victim has for justice, and the family has for closure.” And I loved that, the human image.

[Gaylor] said, “What are you writing at the moment?” I was writing a psychological thriller called DENIAL. I had half of it written. He said, “Tell me about it.” So, I started talking about it. He said, “Hang on a sec. I don’t think your character would have done that. Why have you got the detective doing this? Why hasn’t he gotten outside inquiries into investigating that?” And he then helped me on the rest of that book.

Dave Gaylor he rose up through the ranks and became the rank of Roy Grace in the books, Detective Chief Superintendent, basically head of Major Crimes in Sussex. I realized he had something quite extraordinary, and it’s something that I’ve seen subsequently in really good homicide detectives. You have two completely opposing sides to your personality, not schizophrenic, but on the one hand, to be a good detective, you have to be very methodical. Every major crime is a huge puzzle, with hundreds and sometimes thousands of pieces that have to be painstakingly put together. But at the same time, a good detective needs a really high level of emotional intelligence, and also a willingness to be something of a maverick. Often, it’s blue-sky thinking that will get the crime solved, thinking completely out of the box.

John Simm has those qualities. You believe that he’s methodical. You also believe that he’s deeply empathetic, and also, that he’s got a creative, maverick streak. Dave is retired today, but we’ve worked together on every Roy Grace book. He reads every hundred pages, tells me how Roy Grace would think and act as a real detective would, and over the years, he’s introduced me to hundreds of police officers, not just in Britain, but in many other [places], including New York, L.A., Russia. I’ve been out with the police in half the countries in the world over the last thirty years. You learn so much in those countries from the police.