The performer-activist also talks CHANGING THE GAME and more 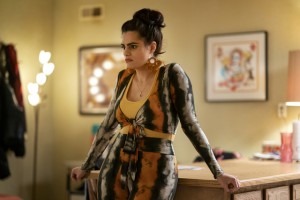 GENERATION is dropping new episodes of its first season every Thursday on HBO Max. The series, created by Zelda Barnz & Daniel Barnz, follows the lives of a group of high school students in Anaheim, CA.

Nava Mau plays Ana, the nurturing aunt of Greta (Haley Sanchez). Despite Ana’s encouragement, Greta has been struggling with her sexuality, torn between classmate Riley (Chase Sui Wonders) and the more outgoing Lucia (Marisela Zumbado). Both Ana and Greta have been dreading the return of Sela (Patricia De Leon), Ana’s sister and Greta’s mother. Sela was deported to Guatemala, but is now returning legally. She turns out to be a lot less judgmental than her family expected.

Mau is an actress and filmmaker, as well as being an activist for the rights of workers and transgender people. She talks about her work in GENERATION, as well as consulting on the trans teen athlete documentary CHANGING THE GAME.

ASSIGNMENT X: So, the situation between Ana and Greta and Sela, which has been building all season, starts getting more concrete now …

NAVA MAU: Yeah. Ana’s sister comes back, and there’s an episode, Episode 11 [“Absolute Zero”], where we really get to get a lot more time with Greta’s family. And it’s a lot of fun – it’s my favorite episode. And then there are a few more moments with Ana and Greta.

MAU: I did not know much. I knew that Ana was Greta’s aunt, and was going to be taking care of her while her mom was out of the country after being deported. And I knew from the script that she is funny, and fearless, and that her relationship with Greta is truly so special.

AX: Do you think Greta supportive of Ana? Because GENERATION is so much about the kids that we don’t get to see too much of the adults, outside of the kids’ point of view.

MAU: Yeah. I think I, as an actor, obviously have to fill out Ana’s interior world, and her back story, and her relationships. And so, I do think that she gets something that she really needs from Greta, which is a sense of acceptance. And I think it would be something to think about – what are the ways that Greta also shows up for Ana? And I would like to [think that] when they’re at home, Greta is fully supportive of her. 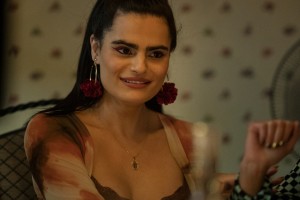 AX: Do you think Ana views Greta as more like a daughter surrogate, or more like the sister she wishes she has?

MAU: I think that Ana sees her more as a daughter. She at first was pretty resistant to having to take on this responsibility [of caring for a minor], and to play this role when she has been so independent, and hasn’t had to be so tied down. And I think that we quickly see these maternal instincts come from Ana, and how much it really means to her. So, I think she really feels a lot more motherly.

AX: Ana opens up her apartment to Greta’s friends and potential romances. Does Ana enjoy that dynamic of having all these teens around?

MAU: She lives for it. I think that Ana tends to be a peacekeeper, but she also loves a mess [laughs]. There’s a wisdom that Ana has that leads her to believe that everything is going to be okay, and everyone’s path unfolds in the way that it needs to. And so, I think that her perspective is to let the children follow their path, and I think she’s happy to provide that [safe haven] for them.

AX: We find out that Ana is a major X-FILES fan, who throws X-FILES-themed parties. Are you an X-FILES fan? Were you familiar at all with X-FILES, or did you go, “What the heck is this show that Ana’s so obsessed with?”

MAU: You know, it’s funny, but the show [that Ana loves] actually changed a couple times. And so, it was interesting to finally land on like, “Okay, yeah, what would be the show that Ana is obsessed with?”

MAU: Oh, I probably can’t say. I think you’d have to ask the writers. But I actually had not seen THE X-FILES. So, I always love to discover what it is like to be in somebody else’s mind, and somebody else’s life, and I feel it is these little things about Ana that help me embody somebody other than myself.

AX: So, what did learning that Ana is an X-FILES fan do for you in terms of playing her?

MAU: There’s this kind of thread that has been unfolding with Ana, where she might be a conspiracy theorist [laughs]. And she’s very into the supernatural and this wavelength that maybe a lot of people can’t see, and I think that she just really believes that there’s something going on beyond the day-to-day, and beyond the physical.

AX: Do you have input into Ana’s style, as far as her clothing and makeup?

MAU: I do. I think that, honestly, collaborating with the costume department, the hair department, the makeup department was one of my favorite parts of working on this show. We had a lot of fun. It was really important for everyone that Ana’s style be distinctive, and that it communicate her power and her presence. So, we really tried not to hold ourselves back. And I hope that people enjoy the looks, because Ana is here to serve. She’s here to serve the people [laughs].

AX: She likes to be seen.

MAU: Yes, she does [laughs]. She’s not afraid of the spotlight.

AX: Do we know what Ana does as a job?

MAU: No, no. They mentioned that she got a real estate license, which I know Daniel felt like was the perfect career choice for her, that she would be great at it.

AX: Is Ana excited that Greta is a lesbian? That is, is she just fine with it, or is she actively, “Oh, this is great, because this is something new and different for me to be around”? 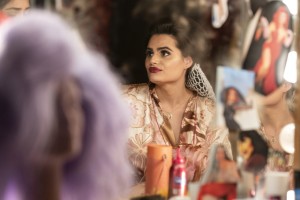 MAU: I think that Ana accepts people as they are, and has no agenda to make people be one way or the other. But I think we sense a part of her really welcomes the kinship that comes from having a family member who’s also queer, especially since Ana’s experience growing up and her day-to-day has meant that she faces a lot of adversity because of being queer and being trans. And so, I think she really feels a sense of responsibility to create a different story for her niece.

AX: Are we meant to know that Ana is trans? It is not discussed at all in the first half of GENERATION.

AX: I wanted to ask you about CHANGING THE GAME, the new documentary about trans teen athletes. You are thanked in the closing credits, so what did you do with that film?

MAU: Oh, I loved CHANGING THE GAME. I know the executive producer, Alex Schmider, from working together on the documentary DISCLOSURE, and through working with GLAAD. So, while they were in post-production, I watched a cut of the film, and gave Alex notes on my thoughts. And then I was so happy to see the finished product. It’s out now, and I think it’s such a beautiful and incredibly touching film. It’s so needed right now in this political climate.

AX: I loved the moment where the sprinter, Andraya Yearwood, is talking to the other young woman, who is saying what an inspiration Andraya is as a black trans teen athlete, and we can see Andraya realizing that she’s had this effect on another human being. That’s just so moving.

MAU: Yeah, that was my favorite part of that documentary, was that relationship between two trans girls, and what I love about CHANGING THE GAME is that it really prioritizes showcasing trans people’s hearts, and their relationships with each other and with families.

[Skiier] Sara Rose [Huckman] was so impressive in the way that she does navigate a tricky political climate. As a trans teenager, she found the courage and the groundedness to speak her truth and not cave in to the naysayers. So, I think that it’s clear she’s able to be very astute in navigating dynamics with people who have differing opinions.

AX: Back to GENERATION, do Ana and Greta present a united front against the sister/mother Sela? Because Greta seems like she has a tendency to wilt under pressure.

MAU: [laughs] Well, it’s not a spoiler, right? The episode is out. I think both Ana and Greta are surprised when Sela returns, and she is just not as punishing as they have known her to be. She seems to be not as judgmental, and she seems to be willing to stretch in a way that I don’t think either of them have ever seen her be before. So, it ends up being a real relief, and such a comfort, to have Ella show up that way, as a mother and as a sister.

AX: Have you been able to hang out at all with Haley Sanchez, who plays Greta, and discuss the character relationships, or do you just find that on set working with each other?

MAU: When we got cast in the pilot, I actually asked for her contact info, to see if she would want to get lunch before we filmed, and so, we did that, and it was so nice to connect with her, and talk about our own personal lives, but also to get to know her point of view on her character. And yeah, you end up being around each other for extended periods of time, so we’ve gotten to be connected over the bond between our characters, and I think that, for both of us, that relationship is just so beautiful. She’s call me “Tia,” I’ll call her “Gretita,” like “little Gretita.”

AX: If GENERATION goes to a second season, are there things that you’d like to see Ana get to do?

MAU: I’ve actually been so lucky to have had these couple months after we wrapped GENERATION to hop onto other projects. So, I’m really excited about this short film that we’re in, directed by April Maxey, that I got to work on. It’s called WORK [laughs]. It’s about a queer Chicana who is going through a breakup, and we see her go through a workday. During the day, she works at an office, and at night, she works at these underground lap-dance parties. And I also am currently directing a couple of the micro-series HIDDEN CANYONS, and I’m truly so excited to see that episode, and it’s been so wonderful getting to work with these people.

AX: And what would you most like people to know about GENERATION?

MAU: I think what people need to know about is that all of these characters relate to each other from a place of love, and it can be very beautiful to witness their humanity in all of its complexity, and its humor, and its triumph.