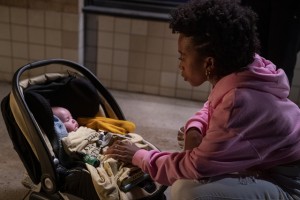 GENERATION – the logo is GENERA+ION – premieres the second half of its first season on HBO MAX on Thursday, June 17. Created by the daughter/father team of Zelda and Daniel Barnz, GENERATION follows a group of contemporary Southern California high school students as they deal with issues of growing up, sexuality, friendship, family matters and more.

Nathanya (pronounce Nah-THAN-ya) Alexander plays Arianna, the extroverted daughter of two fathers (played by John Ross Bowie and J. August Richards). In the first half of Season 1, we see Arianna making homophobic jokes, which she justifies by pointing out her gay parents. Arianna becomes involved in a romantic relationship with childhood friend Nathan (Uly Schlesinger), who has a deep crush on Chester (Justice Smith), who in turn has fallen for his guidance counselor Sam (Nathan Stewart-Jarrett). At the same time, Arianna, Nathan, and Chester all come together with their other friends to help out peer Delilah (Lukita Maxwell), who doesn’t realize she’s pregnant until she goes into labor in a shopping mall restroom.

Alexander, originally from Brooklyn, New York, previously appeared in the feature OCEAN’S EIGHT and had a recurring role on NOBODIES. GENERATION is her first stint as a series regular.

In a phone interview, Alexander talks about playing Arianna in the complex yet upbeat GENERATION.

ASSIGNMENT X: What, if anything, did you know about GENERATION when you became involved in it?

NATHANYA ALEXANDER: All I really knew about GENERATION was the materials I got for the audition. And I remember thinking, “This is so different, and odd, but I like it.” Especially with Arianna, I was stoked to dig deep into the character, because on the outside, she’s fierce, she’s loud, she’s inappropriate all the time, but I knew that there was something underneath it all, and that’s what I was excited to explore with her. But from Day One, I loved the script and how authentic and hilarious it was.

AX: What, for you, is the key to playing Arianna?

ALEXANDER: Well, with Arianna, I like to keep it loose. In creating this character, I immediately took out my journal and began to create her life. I wrote out everything I knew about her from the given circumstances of the script, and then I put a lot of what I wanted her to be in it creatively. The most important thing for me was to humanize her. But I also created these odd playlists with songs that you would never guess that I would have for this character – lots of Queen, Elton John, the Eagles, Beatles, Tierra Whack – she’s an amazing artist – the Twin Sisters. All songs that evoke all kinds of emotions, which help me tap into Arianna. Queen specifically, because their music has all kinds of instruments and levels, where it’s like five songs in one. And Arianna is a whole bunch of personalities in one, so it was a perfect source for me.

AX: Queen’s “Bohemian Rhapsody” has so many different moods within it …

ALEXANDER: Oh, yes, so many different songs in one, and that is one of the songs I have on the playlist.

AX: Do you feel like GENERATION is a realistic portrait of today’s high school students?

ALEXANDER: Absolutely. It’s a modern take on sexuality and identity. The show follows this group of high school teenagers as they navigate their lives. So, it’s funny, they’re messy, it’s the confusing and emotional journey of it all, and I think that’s something Gen Z will be able to definitely connect with. 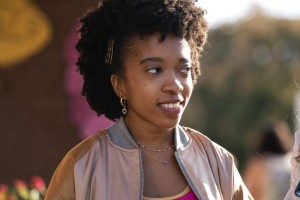 AX: We don’t see much of their actual classroom experience. Do you think that Arianna has a favorite subject? How is she doing in school?

ALEXANDER: I think Arianna is probably one of those really smart students. I believe she gets straight As. But I think school is probably something she’s not very interested in. It probably comes easy to her, the academics of it, so she puts on a front like she doesn’t really care much for it. But also, she’s very into clubs and hosting events, which is probably something you will see more in the future – she has an episode coming up where it dives deeper into her school side of things.

AX: Does she know what she wants to do as a profession?

ALEXANDER: I think she is very creative. She probably wants to be an actress, or a comedian. I feel like she’s constantly working on her stand-up comedy routine [laughs].

AX: So, that’s why she says things like, “My comedy is edgy, and you just don’t get it”?

AX: Is Arianna trying to get a rise out of her dads and her LGBTQ friends with what she says, or is she actually oblivious to the fact that it’s offensive?

ALEXANDER: I think she’s very aware of how offensive it is, but I think because she has two dads, she feels like she has the right to make these kinds of jokes. It’s kind of her humor. She has a very dark, edgy humor that just comes with her, and I think she actually gets a kick out of seeing people’s reactions as well, It’s very fun for her.

ALEXANDER: I think she considers them both to be her dads. She was adopted by them, and I think that she really loves them, and respects them. You get to see the relationship more in the second half as well, which was amazing to explore, especially with J. August Richards and John Ross Bowie. They’re amazing actors, and it was amazing playing off of them. They have a very special moment in Part 2.

AX: Does Arianna have any siblings?

ALEXANDER: No. She has a very cute dog. We will see her in Part 2.

AX: What kinds of feelings does Arianna have for Nathan? Is she genuinely interested in him, or does she just want the validation of him being attracted to her?

ALEXANDER: I think it starts off as a game for her, and then it gets serious, and then she actually begins to really like him. They grew up together, they’ve always been around each other, but I don’t think she ever thought that it would go there with him. So, when they share that first kiss, she then goes all the way in and she really likes him. It does get messy with Chester, but I think she really does honestly get hurt from all that goes on with Nathan in the end. She gets hurt for two seconds, and then she’s like, “Okay, forget you, I’m done with you.” 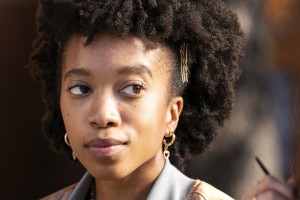 AX: How does she feel about her friend Delilah having a baby and not realizing she was pregnant up until the moment she’s giving birth? Is Arianna thinking, “Gosh, you’re dumb,” or is she just like, “Okay, I shouldn’t be judgmental, I should just go be helpful”?

ALEXANDER: I think at first, as you see when she walks into the bathroom in the mall, Arianna is in shock, and she’s like, “Is this really happening?” And then her second thought is – Arianna says, “Weren’t you getting your period? Didn’t you know?” And after that, she realizes that Delilah had zero clue, and then Arianna’s really just focused on helping her friend. Because Arianna is a diehard friend, and she will do anything for her friends. So, after that, she takes control. She’s like, “I’m going to help you with whatever you need. You can count on me.”

AX: Do you have input into Arianna’s character, either her dialogue, or her look?

ALEXANDER: Oh, yeah. I think what’s amazing working with this team is, it’s definitely collaborative, so as actors, we’re able to have input into wardrobe, hair, as well as makeup and all that stuff, which has been so fun to do. It’s so funny, because Arianna wears pink all the time, and my mom dressed me in pink a lot growing up, and I ended up hating pink. So, when I learned that Arianna’s wardrobe would be ninety percent pink, I was like, “Thanks, Mom, thanks” [laughs].

AX: Is all of that pink Adrianna declaring her femininity in a way?

AX: Did you have to learn how to do anything in order to play Arianna, like help deliver a baby?

ALEXANDER: The baby stuff was something that we worked on really closely with our intimacy coordinator, Rachel Flesher. She was amazing with the physicality, when we would have to be crouching down to help the character of Delilah give birth in the mall bathroom, and she was really helpful with showing us how that would look physically, and how we would have to be in tune with our breathing and connection. And she was amazing with helping us with being authentic and being in the real when it’s coming to giving birth.

And with Arianna, I think the thing that helped me most tap into her character was all the things I mentioned, the journaling and the playlist. It was really fun just putting on wardrobe, makeup, being in that setting with the rest of the cast. As soon as they yell, “Action!”, we’re automatically in it, because of the wardrobe and the setting, and how everyone is just so in tune with their characters.

This is my first TV series. It’s definitely a dream job. It is a huge ensemble, so it was great being able to work with so many different actors, and we also got to work with different directors as well, and they all brought something new and interesting to the show. 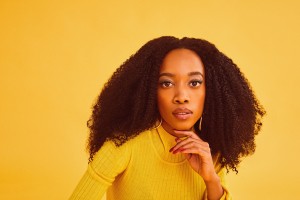 AX: Did you have to deal with COVID protocols while you were shooting GENERATION?

ALEXANDER: Absolutely. We were one of the first to begin filming during the pandemic, and we had to get tested daily, and we had to wear masks in between takes. We followed all the protocols. It could have easily been something that would be stressful, but with the crew and the cast and the team that we were working with, everyone just made it such an amazing experience. In the middle of the pandemic, everyone just made it easy.

AX: You have the Delilah-giving-birth scene, and then there are a lot of scenes where people are kissing or touching other people. So, did you have any concern about doing that during COVID, or did you feel like, “Okay, everybody’s been tested, and I know everybody’s being safe, so I’m not too worried”?

AX: Where do you shoot GENERATION?

ALEXANDER: We shot a lot in Los Angeles. For the high school, we also shot in Pasadena. And we shot on location for some of the scenes, which was really cool. And then we had a studio that we shot at as well.

AX: What can you tease about where Arianna is going in the second half of the season?

ALEXANDER: Part 2 is definitely going to tug at the heartstrings. Part 2 is going to be messier, and it’s going to have a lot of drama, but specifically with Arianna, we get to take a deeper look into her life, we get to see her more vulnerable side. Arianna has some big moments coming up that I’m really excited for people to see, and I’m really excited for people to get to know her a bit more.

AX: Has there been fan reaction to the show, and/or to Arianna?

ALEXANDER: Yeah. I think that specifically our younger viewers appreciate how true to life the show feels, and a lot of our younger viewers feel seen and represented. And definitely our older viewers will gain insight, and maybe they can learn a few things and get a peak into the realities of modern teen life. And they too might be able to identify with some of the adult characters. Our show is definitely told through the lens of Gen Z, and it’s a coming-of-age story about a generation that is more accepting, and refuses to fit in a box or a label.