The actor-writer-director-producer discusses her various projects 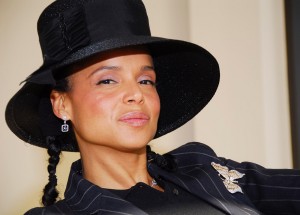 In Part 2 of our exclusive interview with writer/director/producer/actor Victoria Rowell, she talks more about her soap opera THE RICH AND THE RUTHLESS, about her home makeover series TRASH VS. TREASURE, and the challenges of being a Black multi-hyphenate in today’s Hollywood. Rowell appears in two segments of BET Her’s streaming drama about breast cancer, THE WAITING ROOM, both of which premiere Saturday, October 17, on BET Her.

ASSIGNMENT X: Does having THE RICH AND THE RUTHLESS be produced by you, a Black woman, make for any major differences between your show and a white-produced soap opera?

VICTORIA ROWELL: Well, the fact of the matter is, I really wanted to grow over CBS/Viacom, which I’ve dedicated the majority of my career to over twenty-two years, in daytime, primetime, being their host for the Rose Bowl and Thanksgiving Parades, and hosted their holiday special shows. I love the network. I wanted to grow there as my colleagues have grown in network television, without much experience. I wanted to direct, I wanted to write. I asked to direct – I was told, “No, you’ve not done that before.” I was allowed to co-write a script for DIAGNOSIS MURDER, but I was disappointed that it was not recognized that I wanted to grow with the company that I loved and still love, and dedicated my career to. And it really was race-related.

So, I put pen to paper, and began writing my own content many years ago. And I began taking investor meetings I believed that my content was viable. I needed to find investors and homes for the content. And I realized that there were investors who were interested in what I was attempting to do with the diversified content, and also, as a Black businesswoman, as a producer, as an entrepreneur, as a writer, director, I also had a cadre of very qualified crew members, behind the camera, who were also diverse. They came from all walks of life. And there were a lot of investors, as it turned out, out here [in Los Angeles], who are interested in investing in production companies like mine. Mine is titled Days Ferry Productions.

So, to answer your question more specifically, as I was working at CBS and Viacom, I learned business, and I learned the science of soap opera. I’ve studied how, for example, the aggregate of soap opera, across the board, on all broadcast networks is six hundred years of airtime. That’s a lot of airtime. Because soap operas run so long, you’ll have a show on the air for over fifty years. So, if you look at the aggregate of all soap operas, of all time in America, you have over 1,500 years of aggregate airtime. And what we were astonishing was that there was not a single Black-owned soap opera on broadcast television ever. And I endeavored to change that paradigm. I may not be on broadcast at this time, but I have been successful working with the iconic Robert Johnson, who co-founded BET, and sold it to Viacom many years ago. And Bob Johnson also founded umc.tv, which is now parent-owned by AMC Networks. So I guess it took a Black entrepreneur to recognize what I was trying to do, and this is now, again, my result with AMC Networks/umc.tv, I’ve done JACQUELINE AND JILLY, which is about opioid addiction in a Black family, I’ve done four seasons of THE RICH AND THE RUTHLESS, and this summer, my do-it-yourself series, titled TRASH VS. TREASURE. So I feel very fortunate that my content is appreciated. The audience certainly has spoken.

AX: With TRASH VS. TREASURE, is that taking something that seems to be trash and turning it into something valuable?

ROWELL: It is precisely that. It is practical decorative [reinvention]. I have long interior-decorated, under the radar. I’ve been called upon by various celebrities for my eye, and I did a ten-page spread for OPRAH [HOME MAGAZINE], taking things and flipping them. This season is dedicated to working mothers, who are low-income to below-poverty-line income earners with children. I don’t pull out walls or pipes, they’re going to recognize their house, they do have to help me. I repurpose some pre-existing items. I really drill down on their sleeping spaces, and their children’s sleeping spaces. Some of these spaces are one room, or two rooms. I use pre-existing items where I can, and the rest is Goodwill, found objects, Habitat for Humanity, and some new stuff.

AX: So, it’s sort of like NON-EXTREME HOME MAKEOVER?

ROWELL: Far from EXTREME HOME MAKEOVER. It is really a teachable moment show. It is a jump-start show, in that you help people reimagine what they already have in the house. Everyone, I believe, deserves to live in beauty and dignity. And no, you don’t have to spend a million dollars. My clients were just agog at what a little TLC, a coat of paint [could do]. That’s your same bed with some new bedding, we put some floor covering down, we got the dresser you desperately needed, we imagined some shelving. And we organized the space, so it’s a bit of THE TIDY SHOW with EXTREME HOME MAKEOVER, but it’s not [extreme]. It’s heartwarming. These are people that live hand to mouth. These people are right on the edge of being homeless.

ROWELL: No. I have the advantage of growing up in foster care for eighteen years, and I never left the community. I still work with child welfare communities across the country, I lecture for court-appointed special advocates and guardianships. I’m still in contact with my original social worker as a child. And so I can pick up the phone and find my clients. My clients know clients. There is no shortage of clients who want TRASH VS. TREASURE help. I could also call facilities. So I’m very grateful to the community that I was born into, and that’s how I find my clients, in my community.

ROWELL: Oh, I did that a couple of years ago. That was a comedy about a white mother with two biracial children. I have since done a Christmas movie, TWAS THE CHAOS BEFORE CHRISTMAS for BET, which aired last December. I did a movie last year called BIRDIE, which is a feature, so we’ll see where that lands. It’s about criminal justice. I play a grandmother opposite Gregory Alan Williams, who also directs. We have custody of our granddaughter, and the father, who has been released from prison and wants custody, and we fight him on that. So that’s a really powerful movie about criminal justice and parental rights.

I just finished writing a project that has to do with mental health with a co-writer partner of mine that we’re going to be submitting. It’s been an abundant year for me, in all honesty, and I’m incredibly grateful. I’ve been careful. No one understands this virus, any more than one can understand why some of us are working and some of us aren’t. But I will tell you that I am profoundly grateful, and I try to share what I have. It gives me equal joy and fulfillment to know that [as a producer] I can create fifty jobs during COVID.

AX: At this point in your career, do you see yourself primarily as a creator, as a producer, as a performer, as someone who would like to run a network at some point …?

ROWELL: [laughs] Well, let’s answer the back end of that question. As far as a network is concerned, I don’t have an ambition to run a network, but I do have an ambition to be on a diversity task force with a network, to be invited to the table as an advisor. Because I think I know quite a bit from my experience, and I feel I can continue to be helpful in changing systemically a long-held practice. We need to change that [racial] paradigm, and spread the net wider to include all [people], not just [those who look like the people] in the corporate offices who make the big decisions and determine budgets. So that’s my commentary on an executive position there, or an advisor position there.

I have a suite of projects that are in the salvage business, and I hope that, if it’s not TRASH VS. TREASURE, I will get another salvage show off the dock. I’ve just submitted my memoir, THE WOMEN WHO RAISED ME, from HarperCollins, for movie consideration. I’m proud of that. Again, I’m just grateful that I’ve been able to stay the course, I know that this story should be told, and it will be told, and maybe it’ll happen in 2021, maybe 2022, but the script has been penned and submitted, and hopefully we’ll see this story told in movie form, but really [it’s for people from] all walks of life, because the book and the movie are an homage to women all over the world who raise other people’s children.

In terms of where I see myself, I see myself malleable and open, but also being nimble in this time. I’ve tried to be nimble throughout my career, because being top-heavy, it can be a detriment to one’s career. I believe in being nimble, doing low-budget, doing big-budget, being a writer if I have to, directing if invited to do so, teaching a ballet class. I’ll be lecturing at U.C. Davis December 9. I just believe that being a reed in the wind as an artist is what has worked best for me. So, I’m open to all of it.