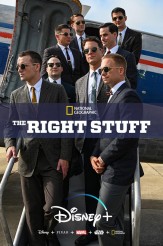 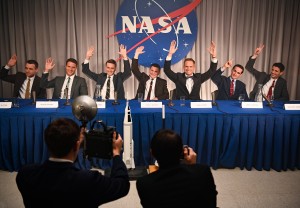 THE RIGHT STUFF, Tom Wolfe’s nonfiction book about the beginnings of the NASA space program, was first published in 1979. It was subsequently adapted as a 1983 feature film, which was nominated for a Best Picture Oscar (and won four technical Oscars).

Now THE RIGHT STUFF is a television series, which premieres its eight-episode first season on Disney+ on Friday, October 9. It deals with the Mercury Program in the late ‘50s and early ‘60s. Seven astronauts, all former fighter pilots, train together while jockeying to be the first man in space.

None of the men are prepared for the intense scrutiny that comes with the gig. NASA has determined that in order to get government funding, they need public support, and that means turning their astronauts into celebrities. Only John Glenn (Patrick J. Adams) has a private life that is as squeaky-clean as the NASA image demands.

McDorman, originally from Texas, starred in the TV version of LIMITLESS and as the title character’s grown son in the reboot of MURPHY BROWN. He has a recurring role on WHAT WE DO IN THE SHADOWS. Some of McDorman’s other TV and film credits include WATCHMEN, LADY BIRD, MANHATTAN LOVE STORY, AMERICAN SNIPER, ARE YOU THERE, CHELSEA?, GREEK, LIVE FREE OR DIE HARD, and QUINTUPLETS.

ASSIGNMENT X: How much of the Mercury 7 story did you already know when you became involved with THE RIGHT STUFF?

JAKE McDORMAN: Honestly, not very much at all. I think I recognized John Glenn’s name. I mean, I knew about THE RIGHT STUFF probably more than I did about what THE RIGHT STUFF was about. So, I recognized that IP. My dad talked about the movie all the time, specifically Scott Glenn [who played Shepard in the feature film version], but no pressure there from Dad. But more than that, not too much, which was interesting, because that meant when I read the script, that was really the first framework I had for what our show was going to be, without having the movie’s adaptation rattling around up there, or even the book. So, it was really the script that was my first introduction to the Mercury Program, and certainly who Alan Shepard was, and the other astronauts in the script – Wally Schirra [played by Aaron Staton], Scott Carpenter [played by James Lafferty], and Deke Slayton [played by Micah Stock]. So, I had a lot of research to do.

AX: The movie cast was a little confusing, because you had the actor Sam Shepard playing Chuck Yeager, and then there was Alan Shepard as a character, who was played by Scott Glenn, and Ed Harris was playing John Glenn, and when you were thinking about it later, it was like, “Wait, Shepard is …?”

McDORMAN: [laughs] I know, I know. We made a joke at the table read like that. It was like, “I’m Jake McDorman, and I’m playing Sam Shepard.”

AX: As a character, is Alan Shepard a departure for you? Because he and John Glenn, particularly, seemed to have egos the size of buildings. You generally play less swaggering people, apart from the Dark Ages warlord in WHAT WE DO IN THE SHADOWS …

McDORMAN: Yeah. Alan Shepard is a departure for me in a lot of ways. The first thing is that he comes from a military family. His dad was in the [U.S.] Army, his granddad was in the Army, and Shepard himself was in the Navy. So that already comes from a family background that’s really different than anything that I’m used to. I don’t have any immediate family that served. So even just understanding what a family like that is like, what an upbringing like that is like, as far as the discipline, how the chain of command trickles down not just professionally, but also at home, the relationship that Shepard has with his father, is a big departure from anything that I’ve played before, or anything that I really know in my personal life. 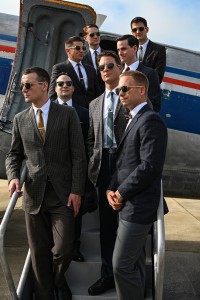 AX: In THE RIGHT STUFF, you have a scene where Shepard and his family have Christmas dinner with his parents, and we see the type of conflict he has with his father. Was that one of the key sequences for you in playing him?

McDORMAN: Yeah. As much of the research that I was able to do on my own, and there was a lot, very early on – not only was each individual actor doing their own research on the characters they were playing, but we all got together to pool our resources, which there’s obviously no shortage of research [material] for that period in American history – but yeah, I think Shepard’s relationship with his father, in that episode especially, was a chance to explore that. I read a little bit about it. Because Shepard was such a private person, say, compared to John Glenn, some of that was a little bit reading between the lines. As I said before, his father was Army, his grandfather was Army, I’m pretty sure, and Shepard went into the Navy, which, for a family like that, is a little bit rebellious. The way Bart [the nickname for Shepard’s father, Alan Shepard Sr.] would have had it would have been for Shepard to follow in his footsteps and become an Army man, instead of a Navy man. So, I think driving Shepard’s ambition to be a pilot, and especially when he became a pilot, he was really vying to be a pilot in war, which he wasn’t able to do, to get up in the air before the war was over. But his drive to excel as a Navy pilot was in tandem with his rebellious nature of sticking it to his old man.

AX: What did you do in terms of research? Did you read the Mercury 7 astronauts’ biographies, did you watch film clips?

McDORMAN: One thing that I did, because I knew that there was going to be so much research to do, was I took a trip in the car from L.A. to Florida. Usually, they fly you to where you’re going to shoot, but I opted to drive, so that I could slow myself down, and allow that time for me to do a lot of reading. On the road, obviously, it was audiobook. But Step One for me, I think, was to read Tom Wolfe’s book, and Shepard’s book, kind of in tandem. So when I was on the road, I’d have the audiobook of THE RIGHT STUFF, and then when I stopped at a hotel, I’d be reading the actual [physical] book of LIGHT THIS CANDLE [the Alan Shepard biography] by Neal Thompson. And those were the two books I think probably I got the furthest in before production. We all continued to read as we were filming, just to be immersed in the time period and everything that was happening. There was also MOON SHOT that Shepard wrote with Deke Slayton and Jay Barbee, and then John Glenn’s book. LIGHT THIS CANDLE was one of the books that I know a lot of the other cast members started to read, because it wasn’t written by Shepard. And that goes into what sets Shepard apart from some of these guys, I think. I think that Shepard is the only astronaut who didn’t write his own autobiography, aside from Gus Grissom [played by Michael Trotter], who died in a fire before [he had time to write one]. Since it was curated, I guess you could say, not in the same way that the others were, it provided a lot of insight on the events that happened, and it was pooling a lot of resources close to Shepard and other astronauts from the Mercury Program. I think it was written after Neal was commissioned to write Shepard’s obituary, and in that process, the Washington Post realized that there wasn’t a book about Shepard, and so it was a really great book to read, and really got into the depth, the warts and all version of who the man was, from childhood into the Mercury Program to later in his life.

AX: What do you think the key for you was to playing him? Was there something that you had to keep in mind, or remember, or hold yourself in a particular physical way?

McDORMAN: Yeah. Exactly that. As far as Shepard’s mannerisms, I watched a few interviews that gave me a little bit of insight into how he talked, but even in the book, they would talk about how he would carry himself, walk with his chest out all the time. That, along with, it sounds a little trite, but even just the posture of somebody who comes from a military family, upright and with deliberation, and at every step he took. So, that was part of it. He was shorter than me, and when he grew up, he was really skinny and scrawny. He would spend time in the summers just lifting weights to get bigger, bulkier. And pairing that with just the natural [personality of someone] that goes into being a test pilot in the 1960s, always pushing the limit, getting closer and closer to the edge, I think, was just hardwired in all of these people’s DNA.

I didn’t really know what a test pilot was when I started this job. It’s amazing to think that a job that we all look at as dangerous – it’s dangerous enough, in a capsule, strapped to a rocket and blasting out into space – this was actually a lot less dangerous in a lot of ways than their day-to-day job that these guys were doing as test pilots. A lot of their wives were relieved when they got into the space program, because they weren’t going to fly. So that all went into it. 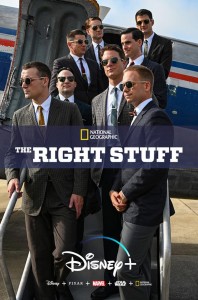 AX: In THE RIGHT STUFF, we see the astronauts training on a piece of equipment called the Mastiff, which is a flight simulator that spins them around and upside-down. Shepard keeps passing out in the Mastiff, but doesn’t want anyone to know. Did Shepard have a specific physical condition that was causing his problems with the Mastiff?

McDORMAN: It’s an inner ear [condition] called Meniere’s disease. And yeah, it ended up grounding him. So, by the time they get to Gemini, outside of Mercury, NASA finds out about it and they ground him indefinitely. At the time, the success rate for the surgery he could get to correct it wasn’t high enough for NASA to really think he would ever be in the air again, so he worked for Mission Control all through Gemini, because of that, and then opted for the surgery. I think, as Shepard put it in one video, he just told his superiors, “I’m getting the surgery, it’s going to work, so put me on the schedule.” And it did. He got it, and it worked, and obviously, he did it again in Apollo.