The actress talks her work on the six-part streaming series 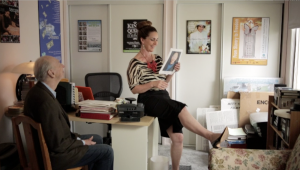 OLD GUY is a six-part Web series that runs a total of approximately twenty minutes. The late Roger V. Burton stars as Harry, who at age eighty is trying to resume a Hollywood acting career. OLD GUY is available for streaming on both YouTube and the oldguycomedy.com Web site. The series is directed by Burton’s daughters Gabrielle Burton, Charity Burton, Jennifer Burton, Maria Burton, and Ursula Burton, who wrote the teleplay with Darin Henry, and are together in Five Sisters Productions.

Peri Gilpin costars as Roger’s agent Winnie. Gilpin, originally from Texas, played Roz from 1993 through 2004 on eleven seasons of the comedy FRASIER. More recently, Gilpin starred in the series MAKE IT OR BREAK IT, and has had arcs on MEN AT WORK, CSI, MR. ROBINSON, and SCORPION.

In an exclusive phone interview, Gilpin talks about her work on OLD GUY, as well as the longevity of FRASIER in syndication and now streaming.

ASSIGNMENT X: Okay. Was OLD GUY conceived as a multi-segment piece? I mean, was it originally a twenty-minute short, or was it designed to be broken into segments?

PERI GILPIN: I think they always meant for it to be a Web series, which was twenty minutes broken up into six segments. There are five [Burton] sisters that are literally birth sisters, and this is about their parents [Burton matriarch Gabrielle B. Burton also appears in OLD GUY]. Each one of the sisters took a segment to direct, so they definitely did it in the form they meant to do it. 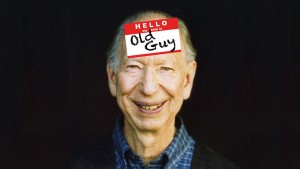 AX: So you didn’t have five people all directing on set at once?

GILPIN: Well, they were all there. But we shot all of my scenes in one day. So when we would go onto the next scene, whoever was directing that episode directed it.

AX: Was it invigorating to work with that many different directors in a day? Or were they all so like each other that there wasn’t much difference?

GILPIN: At first, when I realized that all five were going to direct – and two of them are old, old friends of mine, so it wasn’t like I didn’t know anybody there – I thought, “How is this going to work?” But it worked fine. Maybe it actually added some depth to it that maybe one director wouldn’t have? I don’t know. I was just on an interview with them a few minutes ago, and it’s so funny how differently they see that character of Winnie. And they have something they want to say about ageism in Hollywood. One is a professor at Tufts, one is an actress who is recognized, she was on THE OFFICE, one directs all the time, one’s in Ohio, making documentaries, another one is here in L.A. So they all bring a lot of different aspects and points of view to their work together.

AX: How do you see Winnie?

GILPIN: I see Winnie as a real agent. Most agents are not creating jobs. They’re finding jobs for their clients. Some agents do create jobs for their clients. But for the most part, Winnie is trying to match up Harry with jobs that are appropriate and available to him. Because he’s come back to this business at eighty years old. He did it in the ‘50s, when he was a young man, and then he went away and became a professor, and he headed up a psychology department, but now he’s back in L.A., and he’s auditioning as an eight-year-old man.

So it’s not like [finding roles for older performers like] Robert De Niro or Carl Reiner, God rest his soul, or Mel Brooks or Betty White, someone who you’ve watched in the business. He’s coming to it fresh and new. And so I do believe that they’ll eventually find something wonderful for him to do, because he’s so game. But right now, this is what he would do. And then also, I think she has a great way that she deals with her clients. They’re sort of like her kids. 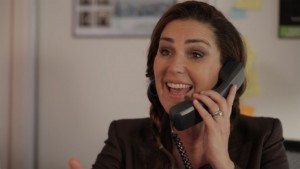 AX: Was Roger V. Burton somebody who in real life returned to acting as an older person?

GILPIN: Yeah. It’s based on his life. Maria and Ursula said to me, “You’re not going to believe this. After Dad retired, he came out to L.A., and started auditioning, and he’s on fire. He gets every part he auditions for. But he’s playing a cadaver, or a lecherous man at a bar, or an adult diaper wearer. He’s getting everything, but he’s kind of discouraged about the jobs that he’s getting.” I just thought that was so funny, and then they sent me the script that they’d written, and it was great. They actually captured our business very clearly, I thought, in a really funny way, and what their dad was going through. And they got to say something they wanted to say about ageism along the way.

And I also feel like. they got to dress their dad up, get their dad to do really funny things, and then their dad is loving making them laugh, so he’s having a great time, too, and he’s an amazing sport, and they also got to write their mom into it, and her story is in it. It’s a real valentine to their parents. Both of [the Burton sisters’] parents sadly have passed away. I think their mother fell ill right as we finished, and they cared for her, and then I think after that, their dad did. But that’s another great thing about this, is it’s a lovely thing for them to leave behind. It’s a great message.

AX: In addition to OLD GUY, you’ve done at least one other Web series, the award-winning BREAK A HIP. You actually made OLD GUY before you did BREAK A HIP, but BREAK A HIP came out earlier. Was one experience instructive for the other?

GILPIN: Yeah, I guess so. To me, they’re both crazy riffs with wonderful actors in them, and it’s just going to do another gig. I didn’t really notice any difference in going to work on those, or any independent film, or a lot of television that I’ve worked on.

AX: Speaking of other television you’ve done, FRASIER is now streaming on NBC’s Peacock network. I think it was streaming on Hulu before that?

GILPIN: Yeah, and I think on Netflix before that. Will Sasso just cracked me up, because he Tweeted, “Siri, where do I find where FRASIER is streaming?” Because it just always is. If you can’t find it one place, you can find it somewhere else. I love that, because I feel people are still watching it, and enjoying it, and getting it. I feel like we’re picking up new fans all the time, and also the old ones that love it are still watching it. FRASIER is a show that I’m especially glad for people finding all the time, because I’m really proud that I got to be part of it. I think that it’s a great show. And another show I did was MAKE IT OR BREAK IT, which I think is a great show for a certain age kid, and their parents that they could maybe even watch together if they wanted to. It’s a great show. I love that they live on. But I grew up watching old shows, like DICK VAN DYKE, so I always hoped that I’d be on something that would be around a long time.

AX: And what would you most like people to know about OLD GUY?