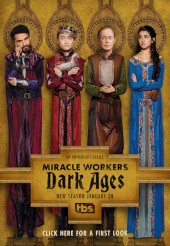 The creator talks about shifting gears with his comedy anthology series 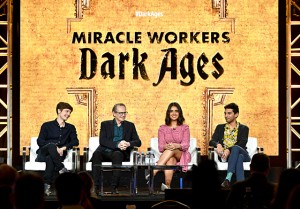 TBS’s MIRACLE WORKERS was the top new cable comedy of 2019. Created by Simon Rich, MIRACLE WORKERS concerned a team of angels, played by a cast including Daniel Radcliffe, Geraldine Viswanathan, and Karan Soni, trying to perform the miracle of getting two lonely people to kiss each other so that a depressed God, portrayed by Steve Buscemi, wouldn’t destroy the Earth.

Rich wrote for SATURDAY NIGHT LIVE, was one of the screenwriters on the Oscar-winning INSIDE OUT, and created the comedy series MAN SEEKING WOMAN. Now he has crafted a new season of MIRACLE WORKERS, entitled MIRACLE WORKERS: DARK AGES, based on his short story “Revolution.” (Season 1 was based on Rich’s novel WHAT IN GOD’S NAME.) Premiering Tuesday, January 28, MIRACLE WORKERS: DARK AGES brings back Buscemi, Radcliffe, Soni, Viswanathan, Soni and more Season 1 cast members in completely new roles.

As the title suggests, we’re in the Dark Ages. Radcliffe is Prince Chauncely, a self-absorbed royal who would rather try to teach ducks how to act than become the bloodthirsty general his father the King (Peter Serafinowicz) wants him to be. Viswanathan is Alexandra Shitshoveler, who is desperate not to go into the family business; Buscemi is her loving, waste-cleaning dad, Edward Shitshoveler. Soni plays Lord Vexler.

Rich adapted MIRACLE WORKERS: DARK AGES from one of his short stories; he had adapted the first season from his novel of the same name. 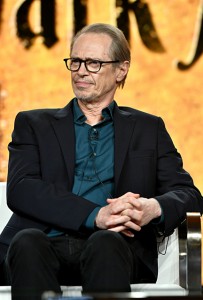 ASSIGNMENT X: Did you know during MIRACLE WORKERS Season 1 that if you got a Season 2, you wanted to adapt this one of your stories for Season 2?

SIMON RICH: I always wanted to adapt the short story, but I wasn’t positive that this was going to be the one I was going to adapt specifically. All of my seasons of TV have been based on short stories or novels that I’ve written. And when I have a new season of TV in progress, I sit down, I look at all the pieces, and I try to think which premise best serves the cast. And so just looking at that short story, and the characters in it, I felt like our cast would do a great job bringing it to life.

AX: So you knew from MIRACLE WORKERS Season 1 that if this went on, you wanted it to be a repertory company of actors, with different roles and a different premise each time?

SIMON RICH: Yeah. That was always the idea. I was really inspired by, obviously, shows like BLACKADDER [which also had its cast in new roles and new eras each season]. But the biggest macro influence on the show is really filmmakers like Mel Brooks or Buster Keaton or the Coen Brothers, filmmakers who changed genre drastically from project to project, but still managed to remain tonally and thematically consistent. And one of the ways they achieved that is often by having a kind of repertory cast that they largely use over and over again. So that’s why we cast such versatile actors, because we wanted to make sure they would be able to reinvent themselves from season to season, and it’s been thrilling to see them pull it off.

AX: Were there any characters you had to add or change from the short story in order to accommodate your series regulars?

RICH: Yes. And that’s always a fun part of the process, because obviously, just because something works on the page doesn’t necessarily mean it’s going to work on the screen. And in the writers’ room, we try not to be faithful to any bit of fiction, because you want to have the creative freedom to break things again.

AX: Were there things you had to do for the characters to make them even more different than they were in Season 1, or were they inherently pretty different to start with?

RICH: The big thing we tried to consciously do is make sure that the characters’ relationships with one another were brand-new. So for example, in this season, Steve Buscemi plays Geraldine Viswanathan’s dad, and the father/daughter relationship is an important arc for our show. And obviously, in the first season, those actors played characters that had a completely different relationship. Also, in this season, Lolly Adefope’s character and Geraldine’s character are best friends, and their story is something that we track throughout the season. So that’s a very conscious thing that we do, is try to make sure that people have different scene partners, that we’re using the versatility of our actors to the fullest possible effect.

AX: Daniel Radcliffe as Prince Chauncely is actually working with a small flock of ducks in a number of scenes. Were the ducks part of the short story?

RICH: There were definitely a lot of ducks, I think [laughs]. It’s been awhile since I actually read it. The story was on my BBC Radio show first. That’s the first place it appeared. And it was actually read out loud by Jamie Demetriou, who is in our cast. He plays the Town Crier. I’ve been a fan of his for years. And I’ve been working with him for awhile, because he’s in both seasons of my BBC Radio show. And it was really exciting getting a chance to finally cast him in a TV show this year. Peter Serafinowicz [who plays Chauncely’s royal father] is also in my radio show. And I immediately thought of him for the part, because he’s just one of my all-time favorite English actors, and I knew he would knock it out of the park.

AX: Without getting too spoilery, in what way would you say the characters in MIRACLE WORKERS: DARK AGES are working miracles? 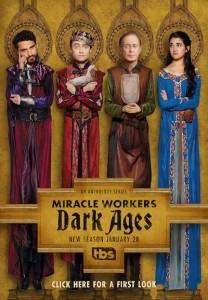 AX: Well, they’re doing small things, like inventing longer shovel handles. That could be seen as a miracle for certain types of workers …

RICH: [laughs] That’s true, yeah, maybe. But the goal is to completely change the story every single year.

AX: Are you going to base the next season on another of your short stories, or are you thinking of an altogether new concept?

RICH: I pretty much base everything on my short stories and novels, just because I’m a fiction writer, and it’s just my process. If I have an idea, I write it first as prose. I think that’s just what I’ve always done, and I would never think to do anything else.

RICH: This one is ten episodes.

RICH: We shot in Prague.

AX: Parts of Prague are still somewhat medieval-looking. Did you do a lot of location shoots?

RICH: No, it’s actually a lot of builds [on a studio lot]. We have an unbelievable production designer, Dave Arrowsmith, and a woman named Diana Cilliers, a U.K.-based designer, did our costumes, and she was amazing.

AX: And what effect are you hoping MIRACLE WORKERS: DARK AGES will have on the audience?

RICH: I’m hoping that people will be as excited as I am to see our cast try something new.

This interview was conducted during TBS’s portion of the Winter 2020 Television Critics Association (TCA) press tour.