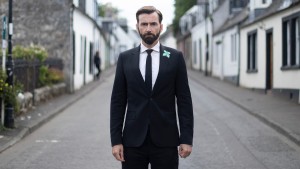 DEADWATER FELL premiered in the U.K. in January 2020, and is now available in North America on Acorn TV’s cable and streaming service. The four-episode miniseries, written by Daisy Coulam and directed by Lynsey Miller, is set in the present, in the charming-looking Scottish village of the title. Everybody knows everybody in Deadwater Fell, where modern amenities like cellphones exist in houses that open the back doors onto forests. Life should be idyllic here, but emotions range from mild ennui and discontent to depraved.

Jess (Cush Jumbo) is an Englishwoman who has moved to Deadwater Fell to live with her boyfriend Steve (Matthew McNulty), and Steve’s two little boys from his previous marriage. Jess wakes up in the middle of the night to see that the Kendrick home across the street is ablaze.

A rescue effort is mounted. However, in the end, only the unconscious Tom Kendrick (David Tennant) can be saved. Tom’s wife Kate (Anna Madeley) and their three little girls are dead, but it turns out that they weren’t killed by the fire. All of the deceased, plus Tom, each have a tidy needle mark on one arm, indicating the tragedy was no accident. But who is guilty, and why? 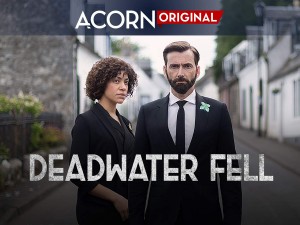 DEADWATER FELL moves back and forth in time to explore what happened. Jess was best friends with Kate, and Steve’s sons were close with the Kendrick daughters. Even though Steve is a police officer, it’s Jess who searches the past more closely for clues. Steve tries to comfort his bewildered, scared children and investigates in his own way.

Sensibly, Steve’s higher-ups at the police department only let him do so much, due to how close he is to the case. Family secrets, motives of witnesses, and some disturbing but realistic intangibles all weave together here.

Wisely, Coulam’s writing doesn’t stretch things out. Although we hopscotch through moments over a period of several years, DEADWATER FELL proceeds briskly. By the end of each episode, our curiosity has been sufficiently roused to make us want to proceed straight to the next.

Jumbo has a warmth and empathy that makes her Jess an easy identification point for us, even when the character occasionally balks when we’d rather she push forward. McNulty is honest and open as Steve, who doesn’t know how to deal with the emotions sweeping through him. Tennant, who has played heroes and monsters, keeps us guessing as to which one Tom is. Madeley is similarly deft with the mercurial Kate. Maureen Beattie is quietly expressive as Tom’s mother, and Anneika Rose scores as a hard-to-ruffle lawyer.

There are a few quibbles here. One is the way DEADWATER FELL reaches its conclusion. While this is often as much explanation as we get when such cases occur in reality, it feels like a beat is missing. There’s also the matter of whether in reality Steve would be allowed to investigate the case at all, since the families were so close. Finally, it’s a miracle that nobody observes that calling the village Deadwater Fell was pretty much begging the universe for something dire to happen there.

Sensitive audience members should be warned that, while we never see the bodies, much of DEADWATER FELL revolves around the deaths of children. This aside, gore is fairly low, although there is a sense of menace throughout. For the most part, this is a very well-structured murder mystery, as well as a social commentary on something that is sadly all too common.

An added enticement, in this hot weather, is a reminder that DEADWATER FELL is set and shot in cool, verdant Scotland. Just watching footage of a car driving on a tree-lined highway may help persuade your brain that the temperature is becoming more endurable.