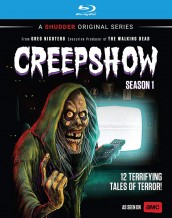 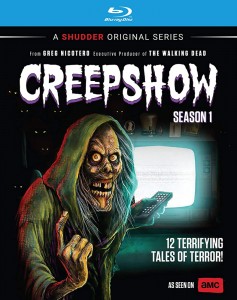 CREEPSHOW can now be viewed in a variety of ways. The first season is available in its entirety on Shudder, where it has been streaming since last year. It is currently running Monday nights on AMC cable (Shudder’s parent network). And now Season 1 of CREEPSHOW is out on Digital HD, DVD and Blu-ray ($34.98 for either format), complete with special features that include cast and crew interviews, behind-the-scenes footage, Easter eggs, commentary tracks, and a comic book.

While not directly based on a horror comic, CREEPSHOW is derived from the 1982 anthology feature, which had Stephen King adapting a batch of his short stories for direction by George A. Romero. The film was made to look as though each segment was part of a CREEPSHOW comic book. Two follow-ups were made, one in 1987, another in 2006. The whole enterprise is an homage to the original ‘50s TALES FROM THE CRYPT, THE HAUNT OF FEAR, and THE VAULT OF HORROR EC Comics (the TALES FROM THE CRYPT TV series didn’t happen until well after CREEPSHOW’s release).

CREEPSHOW series adapter/executive producer Greg Nicotero (of THE WALKING DEAD and KNB makeup effects fame) takes a similar approach, with comic book artwork beginning, ending and punctuating each segment. This variously seems a stylistic choice, an understandable shortcut (either for time passing or to skip over costly transformations), or indications of a stretched budget. Sometimes comic book hues are employed as background, which creates some intentionally over the top moments. The tone here is spooky, gory fun, with twists and comeuppances that are sometimes deserved and sometimes not.

Each episode consists of two unrelated segments, plus a wordless wraparound with the Creep. The opening installment, “Gray Matter,” scripted by Byron Willinger and Philip de Blasi, based on a short story by King, and directed by Nicotero, is a Lovecraftian piece that combines several of King’s favorite plot elements: fraught father/son relationships, alcoholism, and monsters. It stars original CREEPSHOW film veteran Adrienne Barbeau, SAW franchise lynchpin Tobin Bell, and Giancarlo Esposito.

This is paired with the eerie, elliptical “The House of the Head,” from an original script by Josh Malerman, directed by John Harrison. Young WALKING DEAD actress Cailey Fleming stars as Evie, a little girl who loves her doll family and their dollhouse. The dollhouse is invaded by a toyicidal head that Evie seems powerless to thwart.

Episode 2 is “Bad Wolf Down,” written and directed by Rob Schrab. This is a fairly straightforward take on the sturdy Nazis vs. werewolves subgenre, with an enjoyable turn by Jeffrey Combs as a German leader.

“The Finger,” directed by Greg Nicotero from David J. Schow’s script, features a terrific, endearing performance by DJ Qualls as a lonely man who winds up with a weird, very protective pet.

Episode 3 has “All Hallow’s Eve,” directed by John Harrison from a script by Bruce Jones. The segment, which might be considered Spielbergian if not for the gore, concerns a group of youngsters carry out an annual Halloween-night task.

Part of the fun of “The Man in the Suitcase,” written by Christopher Buehlman and directed by David Bruckner, is guessing which subgenre it belongs to before it reaches the climax. Ravi Naidu displays versatility as the title character, and Antwon “Big Boi” Patton shows up briefly as an informative pawnbroker.

Episode 4 consists of “The Companion,” directed by David Bruckner and scripted by Matt Venne, from a story by Joe R. Lansdale & Kasey Lansdale and Keith Lansdale. It’s nicely atmospheric rural horror, although some of the darker-lit moments are hard to see. The plot has a boy (Logan Allen), battered by his psycho older brother (Voltaire Colin Council), who comes upon an unusual scarecrow.

This is paired with “Lydia Layne’s Better Half,” directed by Roxanne Benjamin and scripted by John Harrison, from a story by Nicotero & Harrison. Tricia Helfer stars as a business exec who compounds a bad decision with violence and winds up trapped in an elevator. The dark comedy works well in what is the first segment not to have an overt supernatural component.

John Harrison directs both segments of Episode 5. “Night of the Paw,” scripted by John Esposito, is a riff on the classic “The Monkey’s Paw,” about a cursed item that grants three wishes that come true in bad ways. Bruce Davison plays a mortician who would like to pass the paw on to a woman (Hannah Barefoot) involved in a car crash. Davison is swell as usual, and even though we can guess what will happen, the climactic bit is decent.

“Times is Tough in Musky Holler,” written by John Skipp and Dori Miller, mixes zombies with political comeuppance. Tracey Bonner excels as the rightfully irate narrator. Dane Rhodes is an odious, blustering mayor and David Arquette is a small-town sheriff. More than any other, this segment relies on interspersing comic-book panels with live action. In some other episodes, this seems like an artistic choice; here, it looks like a budgetary matter. We’re torn between admiring what the CREEPSHOW company is able to do with not much space or time and wishing they’d be able to be just a little more expansive. The splatter is first-rate.

CREEPSHOW’s first season concludes with Episode 6. “Skincrawlers,” directed by Roxanne Benjamin and written by Paul Dini and Stephen Langford, has fun with the notion that there are worse things than being fat. STAN AGAINST EVIL creator Dana Gould stars as an overweight man who is hesitant to submit to a seemingly risk-free “body sculpting” technique. The episode isn’t as humorous as seems intended, but both its critters and its gore are impressive.

“By the Silver Water of Lake Champlain,” directed by horror makeup effects great Tom Savini and scripted by Jason Ciaramella from the short story by Joe Hill, is a riff on “Champ,” a North American version of the Loch Ness Monster. Set in 1984, presumably to explain why someone is using a Polaroid camera, the story gives us a classic troubled family. Gena Shaw is quietly expressive as a sad-eyed woman trapped in an abusive relationship with hothead alcoholic Chet (James Devoti). Sydney Wease plays Rose, a teen determined to prove that her late father was right about the existence of a creature in the lake. The piece is nicely moody, and the creature effects are decent.

An oddity here is the way the performers are billed. Some are “stars” and some are “guest stars,” but since there are no series regulars, it seems a peculiar distinction.

Overall, CREEPSHOW is a mostly consistently enjoyable grab bag of short horror pieces, executed with know-how and affection. For fans, the special features should make it worth purchasing the discs rather than simply viewing on streaming or cable.