BROCKMIRE: Hank Azaria and Amanda Peet on the final season of the IFC series – Interview

The actors talk about the quirky dark comedy 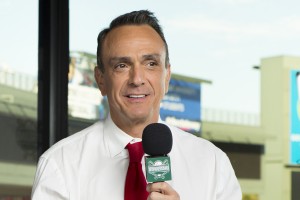 Azaria originated the character of Brockmire on a 2010 episode of the Web series FUNNY OR DIE, in which Brockmire has an on-air nervous breakdown after learning that his wife has been having an affair. Azaria reprised the role on an episode of the NFL Network’s THE RICH EISEN PODCAST. Writer Joel Church-Cooper developed BROCKMIRE as a series for IFC; it premiered in 2017. Azaria and Church-Cooper are both writers and executive producers on the show. 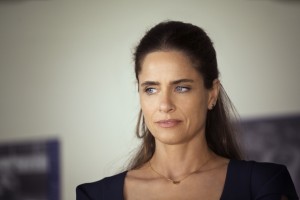 Peet, also from New York City, has had starring roles in projects including the miniseries DIRTY JOHN, the series BENT, STUDIO 60 ON THE SUNSET STRIP, and JACK & JILL, and the films IDENTITY THIEF, GULLIVER’S TRAVELS, 2012, THE X FILES: I WANT TO BELIEVE, GRIFFIN & PHOENIX, THE MARTIAN CHILD, SYRIANA, IDENTITY, THE WHOLE NINE YARDS, and THE WHOLE TEN YARDS.

Azaria and Peet sit down together with a small group of reporters to discuss BROCKMIRE’s last eight episodes. The two actors enjoy teasing each other throughout the interview.

ASSIGNMENT X: What are your feelings about the series BROCKMIRE coming to a conclusion?

HANK AZARIA: I don’t get sentimental about jobs ending, even one I love as much as this. I never have. I’m not that way. I do get sentimental about things in my life ending, but not jobs [laughs]. I don’t know why. I think because they’re so hard to do that they feel more like a relief when they’re done. But I’ll always be able to mess around with this character. He sort of has a life outside of this show, and SPORTS TALK and things like that. So I’ll always be messing around with it.

AX: What do you like about how the BROCKMIRE wraps up? How did you feel about how you leave your characters?

AZARIA: For me, good. It’s not easy to figure out a beginning, middle, and end for a character like this, so I thought it was really nicely poetic and sentimental, where he ended up.

AX: When we first see Jules in this final season, she’s a train wreck …

AMANDA PEET: Yeah. I was excited that she was holding on to Morristown, and that’s how you start, that’s how he wanted to start the season, that she’s still trying to not leave Morristown, and still a drunk. And she thinks Brockmire is really boring sober. 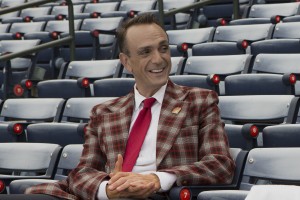 AX: Did you realize in the first episode of the first season when Brockmire has that big breakdown that the show would have this kind of longevity?

AZARIA: No. Because shooting it, I thought that would be funny. But the first cut – I don’t know if you know this – the first cut of the first episode was a real mess.

AZARIA: Yes. Particularly that. Our director [Tim Kirkby] was brilliant, but [it was] this strange cut. I was really terrified. I was like, “Oh, no.” And then we did sort it out. Then once I showed it to people, and they seemed to really laugh, I was like, “Oh, I think we’ve got something funny.”

AX: Do we see any of “Brutal Brockmire” in Season 4?

AX: But I mean in complete meltdown?

AZARIA: You mean, back to drugs and alcohol? No. He’s got different obsessions that we explore, but those are not it anymore.

AX: He’s kind of obsessed with his daughter, but that expresses itself in a different way …

AZARIA: Yeah. He’s a loving guy, but – and I think it’s true of a lot of addicts, he even says it – the way he loves turns into a sort of obsession/addiction. 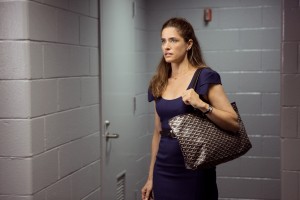 PEET: He does still pee on people.

AZARIA: He does still pee on a person, in anger. So that’s a bit brutal. But he was stone-cold sober when he did it.

AX: With the series BROCKMIRE jumping ten years into the future, how is it playing your characters a decade older? How much makeup do you have to wear for that?

AZARIA: It was not a prosthetic. They just believably grayed me and just didn’t put makeup on me. And I’m quite believably ten years older than I was. So that was it.

AX: So it’s actually a quicker makeup process than it would be otherwise?

AZARIA: The hair took a little longer for me, but other than that, yeah.

AZARIA: It ends in that decade.

AX: Can you tease any future technology that factors into the plot?

AZARIA: The way we handle that is, there’s an operating system, like Alexa or Siri, called Limone, that’s sort of become sentient, pretty much. And by the end it’s a full-blown BLACK MIRROR episode, and they sort of partner with it. This Limone device finds there’s a reason to try to save baseball for its own interests. I’m a sci-fi geek, and I was really happy with that aspect of the story. I liked that episode. Joel Church-Cooper, he writes FUTURE MAN as well, he loves sci-fi as well.

AX: Does this season of BROCKMIRE show baseball as being any different ten years from now? For instance, do players get shot if they lose games?

AZARIA: [laughs] That would really pick up a lot of interest in the sport, turn it into a RUNNING MAN situation. No, baseball’s still the same, but it’s dying. The world is really disinterested. They desperately turn to Brockmire to become commissioner, because they can’t think of anything else to do. His market does all right, because he’s kind of outrageous on the mike. And then Jim brings in Amanda’s character to try to figure out ways to market it. 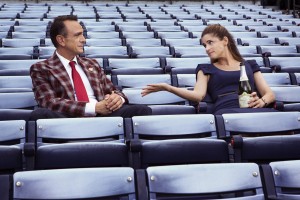 AX: What’s the craziest thing they come up with?

AZARIA: Well, one that gets her in big trouble is –

AZARIA: Yes. But that’s the craziest thing. She has a guy, an escape artist, and dynamite is in the middle of it. Except his guy decides he’s going to use it as a way to kill himself, which he does.

PEET: So you’re not completely far off from what you were thinking.

AZARIA: Which kind of ends her promotional career.

AX: Since the sportscaster character Brockmire was a creation of yours to begin with, do you actually want to be a sports commentator in any part of your being?

AZARIA: Not a play-by-play guy, that’s deceptively hard. I get actual offers, like, “Come call the Brewers game.” I’m like, “I can’t actually do that. I’m not a professional.” But I love going on sports talk shows, talking about sports. I’ll go on ESPN and do a couple innings, because I’ll have material prepared. I love that, but no, I don’t want to really do that.

AX: Is there anything in Jules’s experience that you would ever want to do, or that anybody has thought you could do and asked you to do?

PEET: No. My sister is a tomboy, grew up a tomboy, and wanted to play for the New York Giants.

AZARIA: Did she really?

PEET: Yeah. She knows everything about football.

AX: The dialogue on BROCKMIRE is very complex and fast-paced. What’s the memorization process like? Is any of it improvised?

AZARIA: No. They’re done way in advance. I spend about three months learning it all. Partially, it’s because we don’t have much time to shoot, but also, I learn it like a play. I feel like it needs to be right there [snaps fingers], and it takes me awhile. There are certain phrases that will take me a week, like, “Wait a minute. What the hell does he say?”

AX: So BROCKMIRE isn’t a show where there are a lot of last-minute rewrites?

AX: Kind of a tweaky question, but normally, they calculate that a page of dialogue is a minute. On BROCKMIRE, do they calculate it differently because you’re talking so fast?

AZARIA: No, it’s pretty much a page a minute. But we have learned to shorten scripts to have enough time to shoot them.

AX: Do either or both of you have any new projects going on that we should know about?

AZARIA: I haven’t got that much going on. This woman is doing literally nineteen things. I’m hoping to get an Amazon series greenlit.

AX: Can you tell us anything about that?

AZARIA: It’s a limited series about the Mafia in New York in the ‘80s.

PEET: Yes. I’m going to do THE GILDED AGE, which is a Julian Fellowes show, in New York.

AX: Is that set in the Gilded Age?

AX: Is there any crossover whatever between Jules James and your GILDED AGE character?

AX: What would you most like people to know about BROCKMIRE Season 4?

AZARIA: That it’s really funny, and it wraps up the story really well, and it tries something new yet again.

PEET: I think that sums it up.

This interview was conducted during IFC’s portion of the Winter 2020 Television Critics Association (TCA) press tour.