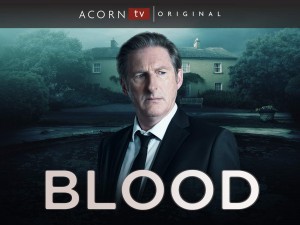 BLOOD now has all episodes of its first two seasons available on the cable and streaming service Acorn TV. The Irish-made BLOOD is a dark family mystery, touched off by the death of ailing matriarch Mary Hogan (Ingrid Craigie). Younger daughter Cat (Carolina Main), who long ago left the small County Meath town where her family still lives, returns and suspects her father Jim (Adrian Dunbar) of being involved in Mary’s demise. Jim and Mary’s older daughter Fiona (Grainne Keenan) is rigidly loyal to Jim. Cat and Fiona’s brother Michael (Diarmuid Noyes) doesn’t know what to think, but has problems of his own.

BLOOD is notable for the way that it shows the same events from different perspectives. Unlike RASHOMON, nothing factually changes depending on whose point of view we’re seeing, but our understanding of what’s going on depends on the emphasis. Series creator Sophie Petzal won the award for Best Long-Form Drama from the Writers Guild of Great Britain for the season finale.

In Season 2 of BLOOD, the first season’s questions have been answered, but Jim is facing new challenges, and Fiona’s secrets come to the fore.

Petzal has written all of the episodes of BLOOD. She and her fellow BLOOD executive producer Jonathan Fisher sit down to discuss their unconventional drama.

SOPHIE PETZAL: That was a bit nuts. I didn’t really expect that. But it’s amazing for us. It’s fantastic.

AX: You’re both British, and according to IMDB, you both started out as script editors in the U.K. TV industry. Is that how you originally came together as producing partners?

JONATHAN FISHER: We met early our careers and became friends. We started developing projects together.

PETZAL: I think I’d just started writing children’s drama when you were becoming my friend, and you [Fisher] were script-editing INSPECTOR LEWIS.

FISHER: Yes. We didn’t meet working together on a project – we started developing numerous projects with various different broadcasters, and BLOOD was the first original series that we made for both of us, so it’s very close to our hearts, we’re very passionate about it, and we love working together on it.

PETZAL: We used to joke, “One day, when you’re a producer and I’m a writer, we can sell a show.” So it’s nice that we can do it now [laughs].

AX: One of the things at the core of BLOOD is weird family secrets that spiral out of control. BLOOD spirals out of the one thing of someone –

PETZAL: Saying nothing. Yeah. And it’s funny how – we’ve talked about this before – even when we were pitching this, early on, we had a sense that we were onto something, because people would go, “Oh, my God. When I was a kid, my brother went off somewhere. We never knew where he went, and no one talks about it, and any time you ask about …” There’s [something] about family secrets, and about how families deal with stuff, don’t really unpack it, don’t really discuss it, and how it toxifies and expands and can turn family members against one another, and how it all leads to three children within the same household, who grew up with the same parents, two of those kids have a fundamentally different view on a parent than the other child. I think there is something really universal about that, even though [in BLOOD], it’s created this unique and bizarre family dynamic. There is a real Irishness to it, but at the same time, I feel like anyone can watch it, and go, “Oh, my God, that reminds me of my cousin Barry.”

AX: Was the character Barry, played by Cillian O’Gairbhi, named after your cousin Barry?

PETZAL: No [laughs]. Barry’s one of the only people who wasn’t named after someone. Poor Barry. Barry was such a lovely guy, and lovely people don’t do well in our world [laughs].

AX: When you were writing BLOOD Season 1, did you have a whole history mapped out for the Hogan family, “so if we do get a Season 2 …”, or did you just get to the end of Season 1 and find out that you had the clout to get a Season 2?

PETZAL: We had just got the wherewithal, I think, when we were pitching Season 1, to think, “People might ask us for a Season 2, so we should think about an idea.” And we came upon an idea, actually, that we really liked, and it’s the idea that we ended up working with a year-and-a-half later.

FISHER: I think these days, there’s such an appetite for returnable series that a big question, when you’re pitching to buyers and commissioners, is, “What happens in due course?” As Sophie said, we did have the idea, which we have ended up sticking to for the second series as part of a wider growth of the brand of BLOOD. And I think that what was key for us is that we knew that Season 1 was going to have a finite ending and a resolution.

We didn’t want to go into the second season and just reanalyze and drag out the events of the first. Instead, we wanted a fresh mystery that viewers can engage with every bit as much as they did the first time round. So hopefully, that’s what Sophie’s writing has achieved. We’ve taken the familiar elements from the first season, so Jim, played by Adrian Dunbar, is back, and the other family members are returning, but we’re also adding new characters, and we’ve got a major new mystery involving the character of Fiona, who in Season 1 was more of a supporting player, whereas this time round, she’s front and center.

PETZAL: Yeah. We wanted the feeling absolutely that none of what is going to happen could have happened [earlier] – it ties into Season 1 in the sense that all this is happening because that happened. And just as, because of what happened to Cat when she was a kid, this is why all this has happened now, in the sense of family turmoil turning over and revolving upon itself.

FISHER: Yet again, a key theme in the second season is there are repercussions of family secrets and not talking about what’s happening to you. That’s very much a central theme that runs throughout.

AX: Watching most of BLOOD Season 1, I think the viewer is wondering, “How can this possibly resolve in a way that allows them to do another season?”

PETZAL: Yeah. That’s always the question, because we knew we wanted Season 1 to have a resolution, we knew we wanted it to be a self-contained story, even though we imagined that we could expand upon it, and have a small time-jump, and then start a new mystery, but with all the leads back, and we’re still dealing with the ramifications of the events of Season 1.

FISHER: I think it’s also true to say that the series has grown and got bigger, so the world is bigger in Season 2. There are more characters, there’s a wider sense of a whodunit, and generally more strands running through it, which again is exciting as part of the organic process of the series.

PETZAL: And we were keen to achieve that, and to grow the show, without losing that intimacy and losing that sort of small-world family drama thing that we captured in Season 1, that really worked out for us. But yeah, everyone’s asking me, “What is your Season 2? What are you going to do? Season 1 is so self-contained.” “You’ll see.” Hopefully, the instinct pays off for us to start a new mystery [laughs].

AX: How would you describe the balance of mystery and family drama within BLOOD Season 1, and is that balance the same or different in Season 2?

PETZAL: I’ve not actually done a comparison, but I’d say we definitely had ongoing conversations about, “Can we breathe? Is this a moment where …?” It’s not like we have a police-led crime story. This is a, “Was there even a crime committed?” It’s about a deep-rooted sense of suspicion from a daughter towards her father. So therefore, every conversation had, with every sibling and every character, that mystery looms large, even if they’re talking about the water cooler. So we knew that we could lean into that context without necessarily having to talk about it all the time, and we found that there were moments when a character was investigating too much, and it got too plotty, and so you pull back, and you could still evoke a sense of tension and mystery from a character doing nothing but picking their nails, and I think we learned that from Season 1, and hopefully applied that thinking to Season 2.

FISHER: Yeah. I think what’s unique about BLOOD is the tone, and a major part of that comes through the quality of Sophie’s writing. Sophie writes these incredibly three-dimensional, nuanced, flawed characters. And the scripts are full of minutia of family life, seemingly very little, small things, dark comedy when you don’t expect it, and that kind of characterization sits cheek by jowl with a slightly heightened, pulpy thriller element. So every episode ends on a cliffhanger, there are twists and turns that you don’t see coming, thankfully, and I think we really carried that on into the second season as well. And as Sophie says, we never wanted this to feel like a police-led procedural, we wanted to root it in the family. So it’s the family members who are really driving the investigative element.

PETZAL: It’s also quite easy, when you’re doing a non-police-led crime story, like a person trying to solve their own crime, you can end up turning that character into a police officer, because you don’t know what else to do. Maybe they hack a computer. Well, a normal person doesn’t know how to do that. And so we’re always having to find ways to think, “Well, what would you do?” And if the answer is, “Nothing,” you’re stuck. Then how do we make drama out of, “I can’t do anything, I’m stuck”? Those are the most interesting moments for us, I think, in keeping our unique identity.

AX: And what would you most like people to know about BLOOD?

PETZAL: That it exists [laughs]. No …

FISHER: I think that it’s a crime drama with a difference. It isn’t police-led, it’s seen through the prism of the family members, and we hope that it’s fresh and distinctive.

PETZAL: Yes. Big twists and turns, elements of pulp, dark humor, not what you expect. And incredible performances from actors that you may have never heard of before, but you’re going to hear about a lot.