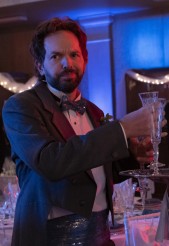 The actor talks about the Showtime dark comedy 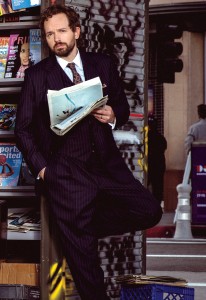 Showtime’s dark comedy BLACK MONDAY begins its second season on Sunday, March 15. The first season of the series tracked the run up to the 1987 Wall Street crash. Season 2 picks up in the aftermath. Freewheeling trader Maurice “Mo” Monroe (played by Don Cheadle, one of BLACK MONDAY’s executive producers), who – in his version of events – caused the crash, is now hiding out in Florida. So is his erstwhile employee and friend Keith Shankar, played by Paul Scheer.

Scheer, a native New Yorker, starred on seven seasons of the fantasy football comedy THE LEAGUE; he also served as a writer on the show. His other TV work includes arcs on THE GOOD PLACE, VEEP, FRESH OFF THE BOAT, and DRUNK HISTORY. Scheer also created or co-created and starred in the series SCHEER-RL, NTSF: SD: SUV, THE ARSCHEERIO HALL SHOW, and HUMAN GIANT, and had roles in feature films including LONG SHOT, SLICE, A FUTILE AND STUPID GESTURE, THE DISASTER ARTIST, and OPENING NIGHT. Scheer also has a role in the current season of HBO’s CURB YOUR ENTHUSIASM.

At a Q&A panel for BLACK MONDAY, Scheer says that his character Keith feels more freedom to be himself this season. “Keith is, he’s out, he’s proud, and he’s living in a world that he can shed everything he’s had to hold inside for all that first season, but at what cost? What consequences come with that? I think everyone’s kind of dealing with that in the show, like, ‘Oh, I finally got what I wanted, but now where does that pay off?’ And not quickly, but these characters do kind of come back towards each other, and old patterns have to come back into play. So without getting too specific, yeah, he’s happy. And then he starts to be very unhappy again, based on situations that start to pile up.”

Scheer also feels that, although BLACK MONDAY is often farcical, it is grounded in a certain reality. “The show has stakes, and I think for a half-hour comedy, everything that happened at the end of last season, it ends in a very heightened way. There is a body count now associated with these characters, and that comes into play, and it doesn’t go away. And a lot of this season is kind of making amends, getting revenge, partnering up, the fallout of it, so there’s always some real weight to the characters, no matter how big the cellphones are.

“I think, overall, what’s been interesting is the show, in the second season, the scope has actually widened out. I feel like the first season, we were very much in a small world, with it being in that trading office. The first episode of the season, we’re starting in Miami, D.C., and New York. And that kind of gives you the lay of the land. So there are so many more characters coming in. I think all of our guest stars just don’t play a role where they pop in for an episode, they really are seeded throughout the season.” 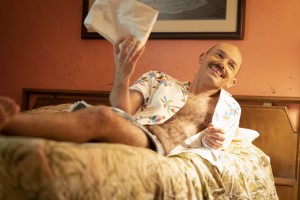 Keith’s wardrobe at the start of Season 2 is somewhat lacking, Scheer notes. “My costume was really more of a lack of costume this season. I was in the shortest short-shorts imaginable, and a mesh tank, when I was lucky.” He turns to jokingly address series creators/show runners David Caspe and Jordan Cahan. “I’ll never forgive you for that. The best reason ever to lose weight is to be told that you’re going to be in shorts that are smaller than this, and it worked.”

More seriously, Scheer says of the creators, “With David and Jordan, what I think is so great about them is that they really give you a lot of leeway with your character. It’s really a conversation with them that you can help pull in different directions, and I think it’s a rarity sometimes for show runners to be so wanting to hear your input.”

When the panel finishes, Scheer takes time for some one-on-one follow-up discussion.

ASSIGNMENT X: Do you get to improvise when you’re doing scenes?

PAUL SCHEER: Oh, yeah. Absolutely. David and Jordan are amazing, amazing show runners, and I think their track record for what they’ve worked on, and the comedies they’ve worked on, show that not only are they great writers, but they believe in the actors that they cast. So there’s not a thing that I’ve ever pitched or wanted to do in a scene that they would say no to. And Don is an amazingly hilarious improviser. But when you get us all in a room, we’re just finding little moments. And it may not be traditional improv as much as it is just us building on top of each other.

AX: With the fact that Don Cheadle is an executive producer who’s on set most of the time because he’s actually in the scenes, does that make life any easier for everybody?

SCHEER: Well, they always say that Number One on the call sheet, something I have been in the past, and that he is now, it’s an important job, because you set the tone. And when you have somebody as great as Don, who’s caring, loving, and legitimately a good person, he treats everybody with respect, so there’s a baseline, so it never drops below that. There’s nothing to even call him over to say, “Hey, fix this,” because he literally is on top of it already. He definitely is a person that you can speak to about the direction of the show to the tap [in the restroom] – everything, absolutely.

AX: Is your character Keith getting more off into his own scene this season, or is he still pretty involved with the other regulars?

SCHEER: Pretty involved. Basically, when you pick up in this season, Episode 1, Mo and I are living in a hotel in Miami together. And I’ve come down there to make amends for ratting him out to the FBI, and then we have our own little bit of adventures together, which then leads us into the back half of the season, where we all as a group come back together. But we all start in disparate places, and then by midseason come together, which will be fun in the way that the show is formatted this season. We’re doing hour-long episodes, essentially. We’re doing two half-hours back to back. 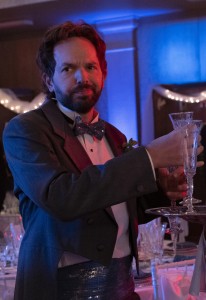 AX: Are you learning anything about the ‘80s or the stock market or anything else over the course of working on BLACK MONDAY?

SCHEER: Oh, yeah, absolutely. I was a kid when all this stuff happened. So to see it from this perspective – and I think the show has an unvarnished point of view of the ‘80s, and in a different way. I think there are so many things like THE WEDDING SINGER, and classic ‘80s looking back, period movies. This show tries to do things differently, and we really isolate, and kind of make fun of it. Like they’re all going to see REVENGE OF THE NERDS, and we’re able to comment on how wrong REVENGE OF THE NERDS is now. We’re able to comment on the ‘80s instead of just embracing the ‘80s, and that’s what I really love it.

AX: How are you scheduling yourself with your various projects?

SCHEER: Well, with BLACK MONDAY, we shoot ten episodes, it takes ten weeks. That’s it. So in that world, you have forty-two weeks of the year to do whatever you want. So for me, it’s always about finding fun opportunities when I’m not working.

AX: And what would you most like people to know about BLACK MONDAY Season 2?

SCHEER: For me, if you like Season 1, I think that what we’re continuing to do is just grow out the world. And like I said, there are bigger things. So where this show goes, it really explodes the landscape. And I think the fun that we have with televangelism and politics this season, and even encountering some of that Miami drug trade going on, we really are exploring different avenues of the ‘80s. Because, to your question, we are living in the ‘80s, but how we’re expanding the show is by starting to highlight more and more things about the ‘80s, not just the stock market.