The series about a missing woman in England streams on Britbox 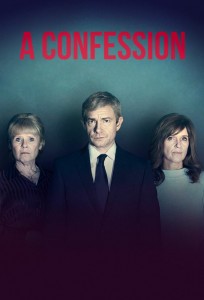 A CONFESSION, now streaming on Britbox, is based on real case that happened in Wiltshire, England, spanning 2003-2016. Well-respected police Detective Superintendent Steve Fulcher, played in the miniseries by Martin Freeman, was so committed to trying to locate a missing woman that he bent the rules. The fallout was catastrophic, affecting a murder case as well as Fulcher’s career.

Paul Andrew Williams, whose other work includes THE COTTAGE, THE EICHMANN SHOW, BROADCHURCH, and WHITE DRAGON, directed all six episodes of A CONFESSION. He sits down to discuss his work on the miniseries.

ASSIGNMENT X: Was directing all six episodes of A CONFESSION like doing a very long movie?

PAUL ANDREW WILLIAMS: It was thirteen weeks altogether, broken over Christmas. So it was long. People think a long job is a crazy thing, but then most people work long jobs, like lifetime jobs, you know what I mean?

AX: Were you involved with the development of the scripts for A CONFESSION?

WILLIAMS: To a degree. When I first came onto the project, the first two were written, and Jeff Pope is such a great writer, he’d been on it for a big period of time. I think in terms of development, there were notes, and there were conversations to be had throughout, but really, I trust that guy. So we talked about it, but he had a fairly good idea of what he was doing.

WILLIAMS: Yeah. Most of the time. There are a couple of real names legally we were asked not to use.

AX: So most of the people who lived through these events were comfortable with you using their names, and then the few who weren’t, you changed?

AX: Is the reason that the real story covered in A CONFESSION was so famous at the time in England just because it’s inherently tragic, or were there more unusual aspects besides the murder that came up later?

WILLIAMS: Yeah, definitely. Obviously, the murders themselves were very tragic indeed, and just the personal stories of these young girls going missing and getting killed is obviously very horrific. But the big thing that’s specific about this case is what Martin Freeman’s character, Stephen Fulcher, had to do in order to try and find the victim, hoping that she would still be alive, and how he had to ignore certain protocols. For the U.K. police, there are certain things that they have to do, and certain things that they have to say, and he didn’t do that, purely to try and save this girl.

AX: Is that like the equivalent of ignoring people’s Miranda rights in the U.S. – “You have the right to remain silent …”?

WILLIAMS: Not ignoring it, but just not saying it when potentially it was appropriate to say it. Actually, without spoiling it, that’s part of the whole story, what would happen – but the whole thing about common sense, whose rights are more likely to be violated in certain instances, whether it’s the victim or the perpetrator.

AX: What are the key themes for you in A CONFESSION?

WILLIAMS: For me, it’s all just the personal journeys of everyone involved, including those people who are trying to get over the tragic death of their child, and how that pushes families towards certain paths, whether it be fighting for justice, whether it be just trying to keep together, but also of a man, who realistically did the right thing, in most people’s minds, but because of certain legal requirements failed to do something, his life was completely ruined. So he went from someone who was a very well-respected policeman, went to be a pariah, because he was desperately trying to save this woman’s life.

AX: How was working with Martin Freeman? Had you worked with him before?

WILLIAMS: I’d worked with him previously on THE EICHMANN SHOW [a British telefilm about real-life efforts to televise the trial of Nazi war criminal Adolf Eichmann]. I like Martin very much. He’s very clever, he’s incredibly hard-working, even more so than one might imagine. He does his homework, he’s a great actor to have on set, and we both had a very clear idea of how we wanted to do the project.

AX: Did you have to learn anything, either about how to search a forest, or psychological conditions, or anything else, specifically for A CONFESSION?

WILLIAMS: No. There was a police advisor every now and again to advise how they would do certain things, but otherwise, using my head to work out the emotional journey for people. But whenever there’s anything factual, you do need people to consult, to make sure it doesn’t look totally crap. 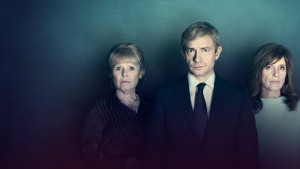 AX: There’s a very lovely overhead shot in the first episode of A CONFESSION, where everybody’s gliding through the forest, searching for the missing woman. Were you looking for more opportunities to do things that were visually poetic?

WILLIAMS: Not really, because the rest of the show is all handheld, apart from two shots, and that was one of them. And the other one is in a later episode. I guess not poetic. It’s just meaning to show the expanse of what people were doing, it is a true case, and how many people came out to try and look.

AX: Does it actually look like they’re gliding like that from overhead, or is that shot something you augmented?

WILLIAMS: If I’m actually honest, I planned the shot, but I wasn’t there on that day. That was after we’d shot everything, and I had to go away, and the producers did the shot with the d.p. But I had planned it and storyboarded it, so I can’t take credit, but they made it.

AX: It seems like you don’t do much episodic work, that you mostly do miniseries …

WILLIAMS: That’s right, I’ve only ever done single dramas. Or I did do a series of BROADCHURCH, but it was the third [season]. I don’t really like going in to do episodic, just because I like to be there to develop people’s characters and so on. WHITE DRAGON, I did the whole eight episodes, and BROADCHURCH, I did want to do all eight episodes, but because of post-production, I had to take a break in the middle. But yeah, I’d much rather do the whole thing. Which is a bit of a killer, because it’s such a long period of time. But yeah, I’d like to keep the [directorial control], or whatever it is.

AX: Is that normal in Britain? In U.S. miniseries, unless it’s the creator doing the directing, you very often get different directors on different episodes.

WILLIAMS: I think it depends on each different show that is there. I know that when I first met Jeff [Pope on A CONFESSION], he said, “We’d ideally want someone for all six.” I said, “Of course. That’s the only way to do it.” I don’t really know, but I think with a big show like this, or Australia’s WHITE DRAGON, it could have potentially have been four and split down the middle. But I’d much rather do all of them.

AX: Is that just the feeling of, you know if you do this here in an early episode, then you can set something up for what you want to do in a later episode, versus, “If I do this here, then maybe somebody’s going to do something entirely different that will screw it up”?

WILLIAMS: Well, yeah, you’re probably right. There’s a sense of the arrogance of, “I don’t want anyone else to do things differently to what I want to do.” Saying that, there are lots of shows where you see people do really great individual episodes that stand out, but for me, I think it was to maintain the style of it as well, because we’re trying to go for a very specific naturalism about the project that I wouldn’t want anyone to sort of adapt.

AX: Is your preferred genre, or at least the genre you get hired to work in, these serious crime stories?

WILLIAMS: Yeah. I’ve done a few of these, quite a few true stories, actually. I don’t know why. I think I like doing them very much, and I like real people, and I like real experiences, and I think it’s sometimes very interesting to try and bring those to a screen, so that people can experience what they will of them, obviously, without having to go through it.

AX: And what would you most like people to know about A CONFESSION?

This interview was conducted during Britbox’s portion of the Winter 2020 Television Critics Association (TCA) press tour.