©2019 National Geographic
Bradley Whitford in VALLEY OF THE BOOM
Interviews 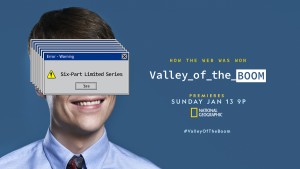 VALLEY OF THE BOOM, premiering on National Geographic on Sunday, January 13, is a miniseries chronicling the wild early days of the Internet. Bradley Whitford, who won a Supporting Actor Emmy for his work as Josh Lyman on THE WEST WING and a second Emmy for his guest turn on TRANSPARENT, plays Jim Barksdale. This interview combines a one on one discussion with quotes from Whitford during a cast and writers/producers Q&A session for VALLEY OF THE BOOM.

ASSIGNMENT X: Are you playing a real person, or a composite?

BRADLEY WHITFORD: I’m playing a real person named Jim Barksdale. He worked at Netscape, and was part of the Browser Wars. He was the adult in the room.

AX: Where did Barksdale see things going, and where did they actually go?

WHITFORD: Well, he was ahead of his time, in that he came out of a version of a networking world, which was FedEx, he understood how networks worked, and how if you expand where you are, the money will come. He understood that. He did not understand what Microsoft was doing when they took him out.

AX: Are you learning anything, or did you learn anything, doing VALLEY OF THE BOOM that was of interest to you?

WHITFORD: Yeah. It’s the origin story of this world that we live in now that is rearranging the neurons in our heads, all this technology, and it was just fascinating to see. They didn’t know what was coming, they had no idea.

AX: As an actor, do you find the Internet helpful to your work?

WHITFORD: I think that the Internet for our particular world, certainly, I can tell you it is a golden age for research as an actor, because you can pull out your phone and see how somebody talked and walked through the entire span of their careers. I think this is the most spectacular time in storytelling with all the streaming services that the Internet has provided, and transformed Hollywood. But what’s striking to me is, there is this idealism here in this naivete about the possibilities of this, very much like the birth of television, which was going to bring opera and art to the masses. Well, guess what?

JOHN KARNA (who plays Marc Andreesen): Now we’ve got VALLEY OF THE BOOM.

WHITFORD: Yeah. Communities of nursing mothers and Nazis. It’s a weird mix. And I feel like the Internet’s been great for show business, and we are just realizing the unintended consequences. We live in the Information Age. It would be better for my kids if we lived in the Wisdom Age.

AX: We used to get the news from talking heads on television. Now it’s almost demanded that we get all kinds of soft entertainment along with hard news. Do you think that’s due to the Internet, or to something else?

WHITFORD: One of the things that most excited me about this when I read it, and when I saw it come to fruition, was the resonance between how we were telling this story, and the story that was being told in a very much different way. This will age me, but there was a real epiphany to me, and we’re not doing this, but when I saw Ken Burns’s CIVIL WAR series, I was like, “Oh, my God. That is the best way to learn this, not from a book.” And I think we’re now exploring ways in filmmaking and storytelling that change the way we get information, and we do have an impatience in terms of attention span.

I have a real question that just occurred to me. Obviously, our attention spans are shortening, right? Why are people so starving to binge-watch hours of the same story? It’s not rhetorical. There is this kind of counter thing of long-term immersion that people are really interested in, and that Hollywood is really capitalizing on. It’s interesting to me. I have no idea what it means. Think about it. 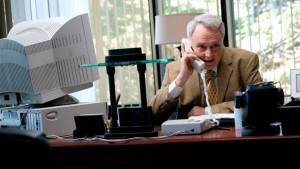 Bradley Whitford in VALLEY OF THE BOOM | ©2019 National Geographic

AX: In terms of your work, do you enjoy doing relatively short-form projects like VALLEY OF THE BOOM, or do you wish you could keep playing Barksdale in a longer series, or …?

AX: Speaking of the Internet, something that is continually being bandied about there is a revival of THE WEST WING. Would you be up for that?

WHITFORD: Yeah, sure. Only if [THE WEST WING creator] Aaron Sorkin was there.

AX: What would you most like people to know about VALLEY OF THE BOOM?

WHITFORD: That it’s the origin story of the technological world we live in now, and it’s a really crazy, wild ride. I think it’s a very interesting time for this story, working on it, because there is an adjustment. Is the Internet going to own us? Are we going to be at the mercy of it? Is it leading to more life, or more Internet? The three most dangerous words to me today are, “And now this.” Because the moment I hear that, separated families are in the rearview mirror, treason is in the rearview mirror. Leaving the Paris Accord is in the rearview mirror. Maybe instead of the news, it should be called “What’s Important.” But the Internet has turbo-charged that need [for new information], because our attention expires like bad yogurt.

This interview was conducted during the National Geographic Channel’s portion of the Television Critics Association (TCA) press tour.