In THE TERROR: INFAMY, Monday nights on AMC, a vengeful spirit from the old country stalks Japanese-Americans who have been confined to an internment camp by the American government during World War II. With so many different cultural influences coming together within the story, both costume designer J.R. Hawbaker and cinematographer John Conroy had a number of specific challenges on the series.

Hawbaker and, more briefly, Conroy talk about their work on THE TERROR: INFAMY.

J.R. HAWBAKER: There was a whole world. There are always so many. Front and foremost is, we wanted to tell the story of the Issei and the Nisei, the first and the second generation [of Japanese immigrants to the U.S.], so we really made a lot of effort to show those distinctions, and to create assimilation, and to show what that looks like, and then also the world of Japanese tradition and kimono. It was actually a pretty magical matchup.

AX: Can you talk about how the cinematography and wardrobe departments worked together on THE TERROR: INFAMY?

JOHN CONROY: I think ultimately what we wanted to do is not lose the color and the detail in the costumes and set design. So very often, the default thing for a period piece is just to desaturate the image, and then you go, “Right, you’re back in time.” So we actually did a series of tests, so that we checked the colors we’re going to hold through our process, because we didn’t want to lose this palette that we’re shooting. So I think from that point of view, we collaborated very well. And we had our visual references, from [Japanese filmmaker Yasujiro] Ozu and things like that, with our ensemble framing. So all in all, that was a very collaborative thing we did.

HAWBAKER: John really was the force, the vision, who had this very clear idea of where we were going to go with color, and showed us some tests. A good way to talk about it, I guess, is inside of the kimono. Because the first one that Kiki [Sukezane, playing Yuko Tanabe] wears – we did a lot of tests to come up with this color that was a horror genre-styled color. It was both rooted in the tradition of kimono from the ‘30s and the ‘40s, but we used color to come up with a good grayish, ghoulish, greenish color. Originally, they had been speaking about a very traditional snow woman, [wearing a] historical Japanese white and red kimono. And then when I saw John’s color tests, I said, “You know what would be great is if we could play in the sandbox of the horror genre, and pull a color out of horror.” And so we looked at VERTIGO, and we looked at SUSPIRIA, and we looked at SUICIDE CLUB, and we looked at even Giallo [Italian horror] films.

AX: Something that seems to be a motif in Japanese horror is that there’s a lot of hair, and everything gets wet. Is that true here?

HAWBAKER: [laughs] There are a lot of sticky elements to play in, in J-horror. 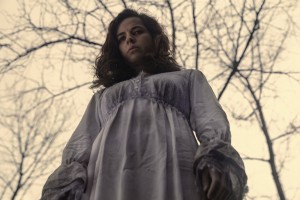 HAWBAKER: We had to design way more than two. We had about thirty kimonos made by the time we were done with the series. [Making] a kimono is a very long tradition, there are about twenty steps to it, it takes anywhere from six months to eighteen months for one to be made in Japanese tradition, so we did our best to do the tradition right, and we actually made one handmade one for Kiki. It’s hand-embroidered, it’s a Homongi kimono, it’s hand-painted, it’s in the Edo style, we use all the tradition, and we used one hand-done one that Masayo [played by Yuki Morita] wears. But after that, we had to create the multiples for the television schedule. So of course, we went into screen printing, and had to create all the ones that would inevitably be helpful in a horror genre, when they get up to no good. We have about five kimono in the series, all different kinds. They’re all very different, and I think we made about twenty-five multiples in the course of this.

AX: Were the kimonos your biggest challenge on THE TERROR: INFAMY?

HAWBAKER: They were a very large challenge. Like I said, it’s a long history. One kimono is hundreds of hours of work, and twenty different steps, and typically, the amount of time it takes us to produce ten episodes it would take to produce one kimono in Kyoto. So it was a large challenge that was really exciting, but I brought on some amazing craftsmen. I had worked on MAN IN THE HIGH CASTLE [which has traditional Japanese costumes] already before, and I had already even before that had for whatever reason a deep, kind of strange love of going on Ozu benders on the weekend, and [Japanese filmmaker Kenji] Mizoguchi, so it was nice to be able to take all of that history, take all of everything that I learned in the Kyoto houses I had worked with on MAN IN THE HIGH CASTLE, and be able jump the line so we could get to a more finished product faster on this. I don’t know if we would have been able to hit the more traditional techniques without everything [in learning about kimonos] before having even come to THE TERROR having helped inform how we did it.