The executive producer chats about the magical Syfy series 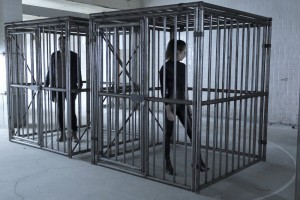 In THE MAGICIANS, now in its fourth season Wednesday nights on Syfy and renewed for a fifth, the characters all have enormous problems. Quentin (Jason Ralph) and Julia (Stella Maeve) are trying to get a god-killing Monster out of the body of their friend Eliot (Hale Appleman). Margo (Summer Bishil), elected High King of Fillory, is trying to run the country. Alice (Olivia Taylor-Dudley) has brought magic into the open in the small, dull town of Modesto, California, with explosive consequences. The dimension-hopping Penny (Arjun Gupta) is still wrapping his head around the concept that he’s in a different reality because this reality’s Penny is sort of dead, and Kady (Jade Tailor) is trying to help Penny, even though he’s not her Penny. The magic-hoarding Library is after all of them.

THE MAGICIANS, based on a trilogy of books by Lev Grossman, was adapted for television by producing/writing partners Sera Gamble and John McNamara. The duo also worked together on NBC’s AQUARIUS, which featured Ralph and Taylor-Dudley in supporting roles. On her own, Gamble created the stalker drama YOU, which began on Lifetime and then moved to Netflix, where it has been renewed for a second season.

Gamble talks about both THE MAGICIANS and YOU in this exclusive interview.

ASSIGNMENT X: You seem to have run out of material from the books for THE MAGICIANS. Did you have a moment of going, “Uh-oh, what are we going to do?”, or did you feel like, “We can play forever in this world”?

SERA GAMBLE: Oh, we can play forever in this world. We haven’t been working our way through the books linearly for a while now. We haven’t entirely run out of book. There are a few set pieces, especially in the third book, that we haven’t gotten to do yet, that we would like to. But we’ve been remixing Lev’s work from the beginning. And at this point, we feel like it’s such a substantial world for us to play around in, we’re just not concerned, we’re excited.

AX: Do you have any idea how long you’d like to see THE MAGICIANS last? Are there certain plot points you want it to live to hit?

AX: How do you and John McNamara break up the producing/show-running responsibilities?

GAMBLE: Well, for one thing, we’re a trio now, because Henry Alonzo Myers has joined us as a partner to show-run the show, going into the next season. But we have a very organic process. John and I have known each other for my entire career – he was my first boss [on EYES]. I really trust his story instincts, and he really trusts my affinity for this genre. When we’re in the room, I think I can be the person who’s really drilling down on the finer points of dragons, and he’s the one who just explains to me why this character and this character get together, or why they are fighting in this scene, I don’t care about the dragon right now. And between the two of us, we get it done. And Henry really has mentored the younger writers on the show. If you look at our writing staff, I think a good half of them, maybe most of them now, started as assistants and were promoted into the room over time. And a lot of that really speaks to Henry’s generosity as a writer. He mentors people and he encourages them to reach for the next rung.

AX: Is the Eliot Monster going to be body-jumping around a bit, or is he pretty solidly locked into Eliot?

GAMBLE: Well, he has the ability to jump around, but he’s noticing that people seem to really be affected by the fact that he’s picked this body, Eliot’s body. They seem to really care, and he likes that. He likes the attention. So he’s decided to stick around, at least in the short term, in Eliot’s body.

AX: In Season 2, there was a medley from LES MISERABLES, and in Season 3, the entire cast performed, for magical reasons, the David Bowie/Freddie Mercury song “Pressure.” Can we look forward to any more musical numbers?

GAMBLE: You can, in fact, look forward to musical numbers [laughs]. John McNamara is kind of a musical freak, and he is sort of naturally inclined to experiment with form, and I guess when people are feeling strong feelings, he thinks about people singing. That never occurs to me. I think that the magic formula is that I almost never want to see a musical number, I’m just not really a fan, and he sort of eggs me on in our process. That’s kind of our partnership. 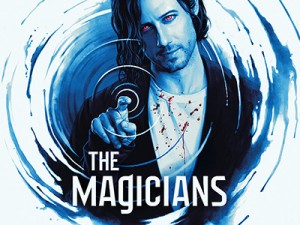 AX: Some of your cast are imports from AQUARIUS. So are we going to be seeing any more AQUARI-ans in THE MAGICIANS?

GAMBLE: You are going to see more AQUARI-ans. Gethin Anthony [Charles Manson in AQUARIUS and Renly Baratheon in GAME OF THRONES] may make a visit this season. I love him from AQUARIUS. Basically, any time we can, we do. My dream vision for my career in television with these partners is that we almost have a repertory theatre, where we have these actors we know are amazing, we love working with them, and we craft roles for them. I’d be happy to never audition anyone again, just work with the amazing actors, have a big enough pool that I get to just work with these amazing actors.

AX: Are there any YOU people who might show up?

GAMBLE: Yes, there are, in fact. In an episode early in the season, Zach Cherry is our guest star. He plays Ethan on YOU. He plays a very powerful, unusual magician.

AX: What can you say about the second season of YOU? Is it picking up from where Season 1 left off, or is it new obsessive people?

GAMBLE: Joe Goldberg returns, Penn Badgley returns. This is a spoiler alert for people who haven’t watched the [first] season yet on Netflix, but Candace [Ambyr Childers] is not dead, so you’ll see more of her. Joe spends a lot of this season in Los Angeles. We’re shooting here in L.A. The situation he finds himself in compels him to move to Los Angeles, and it’s not someplace a dyed-in-the-wool New Yorker really wants to be. So it’s a source of a lot of humor.

AX: With THE MAGICIANS, were there any characters you started with you didn’t realize were going to be regulars?

AX: Can you name any of them?

GAMBLE: Yeah. We did not immediately know that Dean Fogg would stay. We thought we might be killing him in that pilot, but we could not let go of Rick Worthy [who plays Fogg]. I’ve worked with him I think on almost every show I’ve ever worked on. I just adore his work. And similarly, in a very early draft of the pilot, Kady was killed, but as we were coming closer to shooting the first episode, we realized she was very important as a character. She seemed integral to the group, even though she’s really kind of an amalgam of a couple of smaller characters in the novels. Specifically, we really needed to have somebody Penny could talk to. And then Jade Tailor made the role her own, and we’re not idiots, we made her a series regular.

AX: Josh, played by Trevor Einhorn, has gotten much more to do over the seasons. Was he always intended to get a bigger role?

GAMBLE: He was, yeah. We knew we didn’t need him right away, but then, when we introduced him, the idea was for him to step into this character who’s quite substantial in the books. So we knew we were looking for someone special, with real chops, when we auditioned, and we’re just very fortunate to work with Carrie Audino and Laura Schiff. They cast a great many shows, among them MAD MEN, so they know all these really tremendous young actors, and Trevor Einhorn is one of them. So as he was coming in, Carrie just leaned over to me and said, “Trust me, he’s really special.” She never lies, she’s always right.

AX: This season, you actually introduced Santa Claus, played by Tom Wright. Will we see him again?

GAMBLE: Yeah. You may not have seen the last of Santa Claus. He’s too interesting. We’re still talking about him.

AX: Some of your actors appear in other projects. Is scheduling ever an issue?

GAMBLE: We live in a world now where the TV orders are shorter, they’re more like ten, thirteen episodes, most shows now, especially on cable and streaming, and actors put together these crazy seasons where they do so many shows, so generally speaking, we just send up a little prayer, that we get to work with who we want to.

AX: Have you ever found yourself wanting to slap any of the characters – not your actors, but the people they play for you – or is that something you’re actively going for, that at some point you should want to slap everybody in THE MAGICIANS?

GAMBLE: Oh, yeah. I mean, we’re writing these young people stepping into their adulthood. They do really stupid sh**. Sometimes their ignorance is laughable, for sure. I think it’s part of writing these characters honestly, that sometimes they just really step in it.

AX: Have your thoughts about how you want to depict magic changed or broadened over the course the THE MAGICIANS?

GAMBLE: Yes. It’s such a versatile metaphor for so many things, and because we started the show really with the idea that magic is not good or bad, it’s just a tool that exists, and people can use it for good or ill, it can bring out different things in different people. Because of that, I feel like, over time, the story has just deepened, and our relationship to magic has just become more complicated and sophisticated.

GAMBLE: The main one is YOU. We’re just working on Season 2, I’m excited people watched it on Netflix, I’m excited to keep telling the story.

AX: And what would you most like people to know about Season 4 of THE MAGICIANS?

GAMBLE: I think we do maybe the craziest thing we’ve ever done on the show this season. And I know that’s saying a lot, but it’s a season that’s more emotionally deep. That’s really what struck me in the room this year, is that the stories are quite deep and emotionally complex. And then we just did something pretty crazy in the finale. I’m looking forward to visiting Twitter after that last episode.