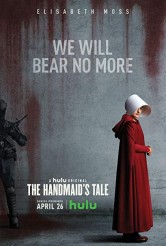 The writer/EP talks what goes into the Emmy-winning series 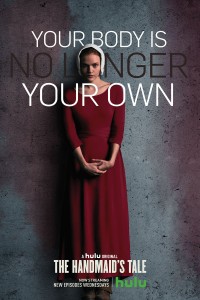 THE HANDMAID’S TALE is set in a dystopian near-future where the former United States is now “Gilead,” a quasi-religious, fascist state. The subjugation of women by men is complete and brutal. Fertility is now uncommon, so women who can bear children are taken by powerful men as “handmaids” who are impregnated in a ceremony that involves not only the men, but their infertile wives.

Bruce Miller adapted THE HANDMAID’S TALE for Hulu. As an executive producer, he shared in the Outstanding Drama Emmy win; as a writer, he won an Emmy for his Season 1 script “Offred” and was nominated for the second-season teleplay June.” Miller’s previous work includes writing and producing on ER, EVERWOOD, MEDIUM, THE 4400, IN PLAIN SIGHT, EUREKA, ALPHAS, and THE 100.

ASSIGNMENT X: Were you the person who initiated THE HANDMAID’S TALE with Hulu, or did they come to you with it?

BRUCE MILLER: They came to me with it. It was initiated quite a long time ago, from what I understand. But I read the book when I was in college, and had wanted to do it since then, so when it became an open writing assignment, Ilene Chaiken wrote a script for Showtime, and then Showtime put it in turnaround, Hulu bought it, and then I think Ilene was just busy with other things. She’s a busy woman. So that’s when they brought me up. 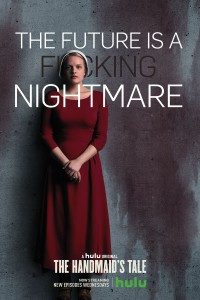 AX: Do you think that it matters with this specific material if the writer is male or female, or just writing with empathy and good faith?

MILLER: Oh, I think it certainly matters. It matters any time you work on any material. You always look at the things that are different from you, from not only the characters, but from the people who find inspiration in that material. I was very attracted to Offred as a character, how strong, and smart, and plucky she was, and how careful she was at cataloguing things that happened in the world. So I never really thought of it as much as a woman’s story as I thought it was Offred’s story. But whenever you get on a show, I’m always looking to hire people who help fill in the areas where I’m not as strong. And certainly I only can imagine so much about a woman’s life, and so I surrounded myself with smart, stubborn, outspoken, very creative women.

AX: Well, in terms of the subject matter, while men do get raped, it’s more of a day-to-day fear for women …

AX: There’s a moment early in THE HANDMAID’S TALE where June’s face is impassive, but we hear her think in voiceover, “I want to get out a machine gun.” Did you think, “We need to counter as passive as she’s being facially with letting us hear her be furious within her mind”?

MILLER: I think it actually came about the other way, that there was the voiceover, and Lizzie countered it facially, that she was the one who made it seem like nothing was going on behind her eyes, while she did that. She’s so good at that, where she manages to play counterpoint to these very difficult things that she’s thinking about.

AX: Did you cast Elisabeth Moss after an audition process, or did you look at her body of work and go, “She seems like the right person”?

MILLER: She’s extraordinary. I’ve been a fan of hers forever, from WEST WING. So I was thrilled that she was available and interested and would consider reading it. So I felt mostly like, “I hope we can get lucky enough to get someone like Lizzie.”

AX: Did Elisabeth Moss suggest Alexis Bledel for Ofglen/Emily because Moss had worked for years with Bledel’s husband Vincent Kartheiser on MAD MEN?

MILLER: [Moss] certainly told us that [Bledel] was lovely to work with. But Alexis Bledel is who I wanted from the very first time I thought of the role. 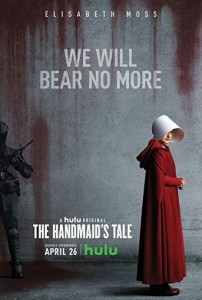 AX: When you’re designing scenes, are they strictly about furthering the narrative, or do you think, “We want people to come away feeling this way about the characters”? Because, for example, sometimes in the scenes with Aunt Lydia, you feel more sympathetic than you imagine you might, whereas in the flashbacks with Fred and Serena Joy, you begin to despise them even more than you did before …

MILLER: We try to tell a story. It’s entertainment. We’re trying to tell a story that’s a story, that people can follow. So I think the emotional arcs of the characters are what drive those scenes. We think of the scenes as, “Okay, what part of the story are we telling?” But once you get in the scene, you’re getting it not from what we want the characters to do, but what the characters would do. We start on a really, really basic level, which is, “What would really happen?” And it’s a weird situation, but you still have to think about what would really happen in this situation, what would people really say, what would they really do? Don’t invent anything, and don’t ignore anything.”

AX: Can you talk about the mock-execution at the beginning of Season 2, where June and a lot of other handmaids believe they’re going to be killed?

MILLER: It just seemed like this is what would really happen after the end of Season 1. We’re not trying to invent cruelties. So what we were trying to do is something that, logically, in other countries, that they would do in this situation to punish women and try to bring their behavior in line. This is what our research told us would happen, and then we just did it in kind of a dramatic way, but also, just putting some of those things in our world in locations that feel like our world make them that much more horrifying.

AX: You’ve said THE HANDMAID’S TALE is never going to be ripped from the headlines, but can you talk about some of the things that are going on today that you’ve discussed in the writers’ room that inform any of the storylines?

MILLER: Yeah. I think the show is certainly not ripped from today’s headlines. I would say probably more today’s headlines are ripped from the book. But the whole Resistance movement and the Women’s March and the #MeToo movement have all been huge points of discussion, just because all of a sudden, people are starting to talk about things that people were shy about talking about just a little while ago. And so any time people are more open, especially honestly the more horrible and dark parts of their personality, their political points of view, that they are expressing openly, I actually think it’s probably pretty good for the world, at least that we’re talking about them, but that’s where we’re being able to see how Aunt Lydia would think, how the Commander would think, how these people are thinking they’re doing good in the world. So we definitely have talked about those things in the writers’ room, but I think that we also are very international, in terms of, there’s a lot of this stuff, the refugee crisis, just the change in law in Saudi Arabia where they allowed women to drive, that whole discussion in the writers’ room.

So all of those things about, just about how the world works in terms of between the relationship between governments and religion, between people and government, between men and women, all of those kinds of things – all the people in the writers’ room are so much smarter than I am, they all bring in really interesting ideas and points of view, and not just things that are happening now, but things that are happening now compared to things that happened in the past. We live in a country that was founded on Puritan values. Puritan values are not religious freedom, they’re Puritan values. So we definitely have people who can look at the newspaper, but also put it into context.

AX: There’s clearly a lot of food for thought, but are you putting forth any specific message with THE HANDMAID’S TALE?

MILLER: In some ways, I want to leave that up to the audience. You don’t want to tell the audience – that’s kind of mansplaining [laughs] – how to feel about the show. You just want to present the story, tell the story in an interesting way, in a unique, complicated way, because I have Lizzie, who has a main circuit cable connecting her heart to her face, and so all of those emotions come out. And then you want to let the audience take away, and that I think is one of the great benefits of the show, is that the people I’ve talked to, everybody takes away something different. And if you start to trying to just put it, “This is about this, this is about motherhood, this is about marital relations, this is about women’s sovereignty over their own bodies,” then that’s what it’s all about, but that’s not what we’re trying to do. We try to tell each scene as a story about this scene, these two people, and the collective effect of that is really up to the viewer.

AX: Does the success of THE HANDMAID’S TALE cause you to do anything differently with it than you did when you started, whether it’s how you approach the narrative, slightly more robust contracts with actors so they don’t take other jobs that would conflict with the show, more on-set security to discourage excited fans, or disgruntled non-fans, or …?

MILLER: We take security incredibly seriously on our show, on every level, especially protecting our cast and crew from people who are either just curious, or – we just don’t want a surprise to be an awful surprise. So we hired many more people to look into that, had lots of discussions about all of that stuff. And in terms of approaching story, we tried as hard as possible not to change how we approach story. One of these things is, you look at Season 1 and you think, “Who were those smart people who made that and won all those awards? I wish we had those people.” And you want to remember, “Oh, that was us.” I think the biggest mistake that I’ve seen people make [on other shows] is that they just forget what they did Season 1, and they do something different, and then all of a sudden, you get a different show, and it may or may not be good, but I think the way we worked in Season 1 was very, very successful in terms of getting cool stories and unique stories up on television, and we’re just going to try to keep doing that.

MILLER: That it’s not about being beaten over the head. It’s a hopeful story about surviving a hard situation.