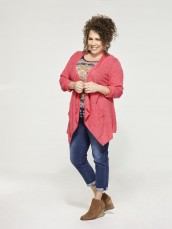 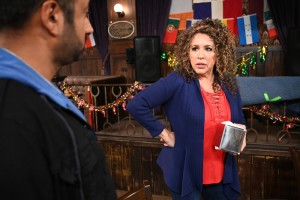 In NBC’s freshman Thursday-night comedy SUNNYSIDE, Kal Penn, who co-created the series with Matt Murray, plays Garrett Modi. After a very public humiliation and firing from his city council seat, Garrett winds up teaching a class that helps immigrants study for their American citizenship test.

One of Garrett’s students is Griselda, played by Diana Maria Riva. Griselda has an unending supply of part-time gigs to make ends meet, including bartender, waitress and baseball stadium hotdog vendor.

While Riva isn’t juggling as many simultaneous jobs as her SUNNYSIDE character, she works constantly. Her numerous film and TV credits include COMMON LAW, MURDER ONE, THE X-FILES, WHAT WOMEN WANT, PHILLY, SABRINA THE TEENAGE WITCH, LUIS, THE WEST WING, STUDIO 60 ON THE SUNSET STRIP, THE GOOD GUYS, SHORT TERM 12, THE BRIDGE, LOVE & MERCY, MAN WITH A PLAN, and the upcoming THE MORNING SHOW.

At a Q&A session for SUNNYSIDE, Riva relates how her parents reacted when she decided she wanted to act professionally.

“I think it’s more commonplace here [in Los Angeles] for a young person to say, ‘Mom and Dad, I want to be an actor.’ But in Cincinnati, Ohio, as first-generation [Americans of Dominican descent], that was not what they were expecting. And I do remember hearing that when my uncle, when he was a teenager in high school, told my grandfather he wanted to be an actor, my grandfather was incensed, like, ‘Absolutely not. We did not escape a dictatorship for you to come here and be an actor.’ But there was something about women being educated and empowered and independent that he did believe in. So, for whatever reason, when I announced I wanted to be an actor, he was all for it. And my mother was, too. And let me tell you, the one day that I went and participated on the $100,000 PYRAMID, and took my grandfather, who was visiting, and my contestant and I won, I had his heart.”

Following the Q&A, Riva stays for a follow-up conversation about SUNNYSIDE.

ASSIGNMENT X: Like your real-life grandfather, Griselda is from the Dominican Republic, right?

DIANA MARIA RIVA: Yes. [The writers] made that choice when they learned that was my background.

AX: Did they make any other adaptations to Griselda, once you were cast as the character?

RIVA: You know, there are a couple of surprises along the way, in Episodes 2 and 3, that I didn’t learn until we had our writers’ meeting [in July]. So that’s fun and I can’t wait for those to come out. But ultimately, I think that they’ve done a really good job at not making her just a one-note joke. She has multiple jokes and multiple jobs. There is so much more to her, and it’s all coming out already in Episode 2 and 3, and it makes her just even funnier. 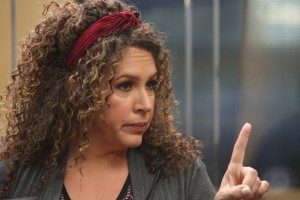 AX: Did you have to learn how to do anything in order to play her, like anything about any of the five zillion jobs that she has?

RIVA: I grew up in Cincinnati in the time of the Big Red Machine, Pete Rose, Geronimo, Johnny Bench, all those guys. So when [as the baseball stadium vendor] I called out, “Soda!”, I’m like, “Oh, I know this. These are my people.” So it’s always fun to be able to draw on something in your real life, and it’s always fun to be able to feed your character from where you come from. And although I have not lived Griselda’s life, Griselda was all over my family. So you draw from where you can.

AX: This is a serious question – do we find out Griselda’s sleep schedule? Does she take ten-minute naps every hour?

RIVA: [laughs] I’ve asked something similar – “When does this woman sleep?” “She doesn’t need to, she’s a vampire.” I know she carries a night shift somewhere.

AX: We know Griselda has a son. Will we meet him?

RIVA: Yes, we will meet my son this first season. And my romantic interest, too.

AX: SUNNYSIDE is set in Queens, New York, but it’s shot in Los Angeles. How do you feel about shooting L.A. for New York?

RIVA: Well, because I live here [in Los Angeles], and I’m still raising children, I’m okay with the business staying in town. I love New York, and I love to go there, but I feel like everything in a performance and in a production is theatrical. We have to act, whatever we’re doing. We have to bring the location and the script to life, and the characters to life. And if we’re not doing it, then we’re not doing our job.

AX: SUNNYSIDE is a kind of comedy of inclusion. It’s not politically neutral – I guess it could be termed progressive comedy. Do you like this kind of material?

RIVA: Yeah, I do like it. I think it’s progressive. I do think it’s being honest. And I do feel like it’s also being lighthearted, no harm done, no hurt feelings. In the first episode, we really have to tell the back story, and that’s our responsibility. But by the second episode, you’ll start to see, we have real character journeys that we’re going on that are in addition to the American Dream, and then that takes everybody on that ride of a fun comedy and a fun show. So why not? 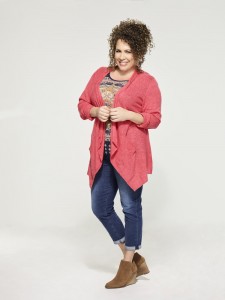 RIVA: I love it all for different reasons. I love to be able to dive into improvisational-type situations in a show like this, and multi-cam sitcoms as well. I love to dive deep into characters in a heavy drama. And then the energy of a film, being in a movie, is always exciting, and it’s the most challenging, I feel, on an acting level. So I love it all for different reasons.

RIVA: I did the first season of the Netflix series DEAD TO ME, with Christina Applegate, and I have come back for Season 2. I have a Disney Christmas film called NOELLE with Anna Kendrick and Bill Hader and Shirley MacLaine coming out at Thanksgiving, and that is my schedule for the next six months.

AX: And what would you most like people to know about SUNNYSIDE?

RIVA: That it’s funny, and fun, and a great respite from a lot of heaviness.