The actor talks the end of the HBO comedy series 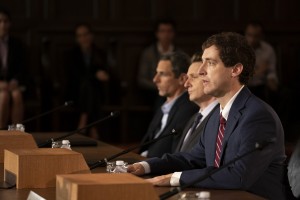 SILICON VALLEY embarks on its sixth and final season Sunday, October 27, on HBO. Created by Mike Judge & John Altschuler & Dave Krinsky, the half-hour series stars Thomas Middleditch as Richard Hendricks, who invents a data-compression application in Season 1 and becomes a tech mogul almost in spite of himself. He is surrounded by a group of fellow idiosyncratic tech specialists, played by a comedically skilled group that includes Kumail Nanjiani, Martin Starr, Josh Brener and Zach Woods.

Likely due to his role on SILICON VALLEY, Middleditch has become a highly visible spokesman in TV commercials for Verizon. Originally from British Columbia, Canada, Middleditch can currently be seen in theatres in ZOMBIELAND: DOUBLE TAP. Earlier this year, he costarred in GODZILLA: KING OF THE MONSTERS. His other credits include YOU’RE THE WORST, REPLICAS, TAG, ONCE UPON A TIME IN VENICE, THE FINAL GIRLS, THE MORNING AFTER, FUN SIZE, and THE LINE.

Naturally, Middleditch can say nothing about the plot of SILICON VALLEY’s last season for fear of being deleted. Here’s what he could say more generally about the show, in a one on one conversation.

ASSIGNMENT X: When you started on SILICON VALLEY, did you think it had these kinds of legs?

THOMAS MIDDLEDITCH: No, not at all. It’s a total surprise. But I’m glad it happened [laughs].

AX: Do you have any theories as to why SILICON VALLEY has done so well and lasted for six seasons?

MIDDLEDITCH: I don’t know. I think the show itself mixes a bit of obviously comedy with a bit of suspense. By the end of each episode, you’re like, “What the heck is going to happen next?” It also gets a lot of accuracy with the subject matter. If you’re going to do a deep dive in a culture like Silicon Valley, you want to make sure that, technically, it’s getting it all right. And I think the show does, for the most part.

AX: A lot of the plotlines in SILICON VALLEY involve Richard and other characters having their ideas either outright stolen, or mangled into senselessness. Do you think it’s a good metaphor, or analogy, for the Hollywood creative process, in terms of people having their ideas quashed or ridiculously repurposed?

MIDDLEDITCH: There are definitely some parallels, to put it mildly. 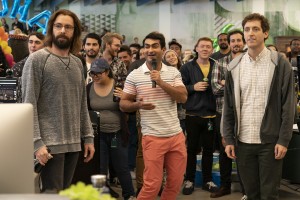 AX: How would you describe Richard’s trajectory over the six years of SILICON VALLEY? Do you feel like he’s actually changed, or that he’s just getting stressed out about different things now?

MIDDLEDITCH: Well, he’s still getting stressed out, but he’s had to grow into the position of a boss and a C.E.O. and figure out how to do all that. There’s maybe an element of BREAKING BAD. We’ll see. Maybe a sprinkling. We’ll see how much of a bad boy he needs to be.

AX: Have you learned anything from doing SILICON VALLEY, or had to learn anything in order to play Richard?

MIDDLEDITCH: I’ve learned a little bit about investing, and what Series A and B funding are. I wouldn’t be able to make a new Internet, that’s for sure. 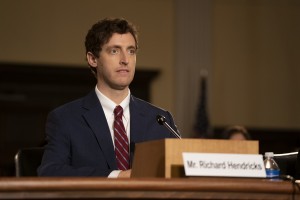 AX: To ask about something completely different, how was acting in GODZILLA: KING OF THE MONSTERS?

MIDDLEDITCH: It was great, super-fun to do. It’s always been something on the bucket list, to be involved in some kind of big, crazy blockbuster movie.

AX: And what would you most like people to know about SILICON VALLEY Season 6?

MIDDLEDITCH: That it is the final one, so watch it [laughs].

This interview was conducted during Warner Media and HBO’s party for the Summer 2019 Television Critics Association (TCA) press tour.