The actor also talks the last season of GOT 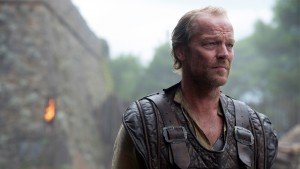 Actor Iain Glen is having a busy run of Sundays on television. On March 31 and April 7, he stars in the four-hour miniseries MRS WILSON opposite Ruth Wilson, on PBS’s MASTERPIECE. Developed for television by Wilson, MRS WILSON sees Wilson playing her own grandmother, Alison Wilson, whose memoirs were the basis for the miniseries. After her husband, British ex-spy Alec Wilson (played by Glen) died, Alison discovered that he had multiple other wives and families. (Ruth Wilson says there are now enormous Wilson family reunions, where surviving members of all the different strands get together – she suspects there may be more families yet to be discovered.)

April 14, the Sunday after MRS WILSON concludes, Glen is back as Ser Jorah Mormont on the eighth and final season of HBO’s GAME OF THRONES. (We assume you’ve heard of that one.)

Glen, originally from Edinburgh, Scotland, plays the title role in the JACK TAYLOR telefilms, and has amassed film, TV and stage credits including DOWNTON ABBEY, THE IRON LADY, multiple installments of the RESIDENT EVIL franchise, Hamlet in ROSENCRANTZ & GUILDENSTERN ARE DEAD, MOUNTAINS OF THE MOON, and GORILLAS IN THE MIST.

ASSIGNMENT X: With MRS WILSON, because you’re playing the grandfather of your costar/producer Ruth Wilson, did you feel any more responsibility regarding your work than you normally do already?

IAIN GLEN: Yes, you always do when you’re occupying the shoes of somebody who actually lived, and obviously the connection with it being a member of Ruth’s family, you do feel a responsibility. But he was such an elusive character; there were certainly no recordings of him. There were lots of photographs of him, but I didn’t feel restricted by the actuality, and Ruth never made me feel that there was something that I should be doing that I wasn’t doing, so there was a liberty just to interpret it as a role. 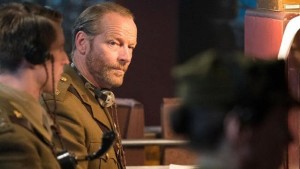 AX: You’ve played a number of people involved in the intelligence community, or outright spies, throughout your career, so where does Alec Wilson rank in terms of the secrecy, ruthlessness, dedication to country, et cetera?

GLEN: [laughs] Well, he’s right up there. To be honest, I got to really like the man, and I think there are lots of ways that one could mitigate the external outlook of what it looked like he got up to during his life. One of the big things that people find it very hard nowadays to appreciate is what it’s like to live through war, and the fact that you very necessarily become aware of life’s finite nature. He was in very endangered situations all the time, and I think he was a survivor. I also think that he was a profound patriot, and he gave a great deal for his country. If I was to guess why the intelligence services won’t release the material about him – this is completely me firing from the hip, but I suspect it’s because they know that they behaved pretty abominably toward Alec Wilson in the way that they sacked him. Generally, in the U.K., it’s probably true in America as well, when the higher echelons of our society behave in a pretty poor fashion, they’re very, very good at burying it until enough time has passed that we don’t care quite so much about it. And I suspect that when it finally gets revealed, there could be [no reason for withholding information] about the work that Alec Wilson did during the Second World War that is still case-sensitive, I cannot believe that, the nature of the work that he did. So I think that he was unceremoniously removed for reasons that were not good enough, and I think they’re very embarrassed about it. But that’s me, Iain, just speaking, defending the person I was playing.

AX: Were there any scheduling issues for you between MRS WILSON and GAME OF THRONES?

GLEN: A little bit. Only because MRS WILSON came quite close on the back of THRONES, and so they just get very wary of their actors completely losing their THRONES look, because they’re worried that they’re going to have to pull you back, you might be needed for a pick-up. But it was all very gently done, and I know them all now at THRONES so well that we were all quite happy with it.

AX: Obviously, there’s not a lot you can say about the upcoming final season of GAME OF THRONES without a spoiler dragon bursting down through the ceiling and eating all of us, but can you at least say how you’re feeling about it?

GLEN: I feel very excited. I know what we put into it. We got six feature-length episodes, I think they’re going to blow people’s minds. They were certainly probably the most difficult episodes that we’ve ever shot, for all sorts of different reasons. There’s been this prolonged delay for fans, but that’s only indicative of the amount that’s been put in to make sure that they come really up to the mark, and I think they will be hopefully the best six that people have ever seen.

AX: Was this noticeably different production-wise from earlier seasons?

GLEN: It was in some ways, yeah. But they just wanted to realize it as completely as they possibly could, and THRONES has become such a global hit that HBO had the belief in it to put everything in to making sure the episodes were fully realized.

AX: You’ve said elsewhere that you think GAME OF THRONES fans will be surprised …

GLEN: I think they will be surprised. But that’s always been an element, hasn’t it? Since Sean Bean [as Ned Stark in Season 1] got decapitated, there was always an element of surprise. That’s part of the concoction people love about THRONES. But there are some amazing twists in this story, I think there are phenomenal set pieces. Certainly when I read the scripts, I thought they had bettered themselves. They looked unshootable, I have to say, when we read it, but I’ve got used to that with THRONES. Just bigger and better and more surprises. The same everything that people love about THRONES, but to the power of THRONES.

AX: Were you surprised that your character, Jorah Mormont, made it to the final season?

GLEN: I definitely was. Probably of all the THRONES characters, mine has flirted with death more than most have [laughs]. I’ve had many near-death experiences, so I was very glad. Right from the word go when we started, there was always that element with him – for every character in THRONES, particularly when it became as popular as it did – that we all wanted to survive, but [series developers/show runners] Dan [Weiss] and David [Benioff] would never let us know if we did or we didn’t from season to season. I was very glad to make it to the end.

AX: Were you sorry to see GAME OF THRONES end, or were you ready to move on?

GLEN: Both. I’d say, “You’re welcome.” Some of the most successful TV shows – you look at MAD MEN or BREAKING BAD – there seems to be a saturation point round about six, seven, eight seasons, and so it feels the right time to finish. And Dan and David always had it in their minds – I think there might have been pressure for them to continue, but they said, “No, we know the amount of storyline we’ve got left to tell, and we’re going to tell it to that rhythm.”

AX: And what would you most like people to know about MRS WILSON?

GLEN: I honestly think it’s a very unusually well-realized drama. Sometimes things coming from actuality can burden a drama, and you can get lost in the truth in the wrong way. But it was shown in the U.K., and it got a massively, overwhelmingly brilliant response, so I just think it’s a fantastically-realized drama. It occupies different periods, from the ‘30s to the ‘40s to the ‘60s. It’s beautifully shot by the BBC. And so I’m very proud of it.

This interview was conducted during PBS’s portion of the Winter 2019 Television Critics Association press tour.