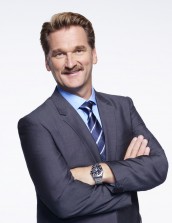 The actor talks the final season of the Emmy-winning series 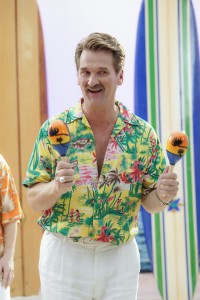 The CW’s Emmy Award-winning musical comedy/drama CRAZY EX-GIRLFRIEND is now in its fourth and final season on Friday nights. Series creators Rachel Bloom and Aline Brosh McKenna have said they had a four-year plan for their story of Rebecca Bunch (played by Bloom), who leaves a successful legal career in Manhattan to move to West Covina, California in order to win over her childhood crush, the oblivious Josh Chan (Vincent Rodriguez III). Rebecca, and everyone around her, frequently burst into elaborate musical numbers to express their feelings. CRAZY EX-GIRLFRIEND has been so successful that the cast embarked on a cross-country concert tour, performing songs from the series.

PETE GARDNER: I lived in Chicago for twelve years, had the time of my life there. I never thought I would come here [to Los Angeles, where CRAZY EX-GIRLFRIEND is made], because I loved that so much. But then I think in the mid-‘90s, all my friends went to SATURDAY NIGHT LIVE, or they came out here, or whatever, and it because like a ghost town, and I was kind of sad. I was directing, and I was teaching, and I was like, “This is the end of this road, I can feel this.” So I was like, “We have to go to [Los Angeles].” We had just bought a beautiful house, this old Victorian house, in Old Irving, which is a little bit west of Addison and all that, like Wrigley Field, and my wife said to me, “Go for six months, see what you think. And if it’s not what you want, we’ve always got this house, we’re all set.” And so I did, and then I got jobs – she’s so great. My poor wife grew up in Chicago. And so she never really wanted to leave, and I think, honestly, if we ever could leave, or if I had to go back, she would be like, “Oh, funny thing, my bags are already packed. We can go right now.” Someday.

AX: How was the CRAZY EX-GIRLFRIEND concert tour?

GARDNER: Oh, my God. When Rachel told me that we were doing a stage version, I was the first one to sign up. I was like, “Oh, I’m definitely doing it, because I’m never going to have this experience again.” And then I called all the rest of them, and I was like, “You have to do it. Because we don’t know if we’ll ever sing these songs again.”

AX: Do you prefer the solos or the group numbers?

GARDNER: Oh, my gosh. I have to be totally honest – the solo numbers are like a Christmas present, because just to get to sing somebody’s funny song that they’ve given you in a genre, and [CRAZY EX-GIRLFRIEND choreographer] Kat Burns is going to be teaching you dance moves, and all that kind of stuff, that is just truly joyous. But, that being said, the group numbers are so much fun, because you’re playing with all these goofballs. You can see, just watching us for however long we’ve been out here [in the Q&A panel for the series that preceded this discussion], the joy that we have playing with each other is just infectious. We all want to be a part of each other’s good time. 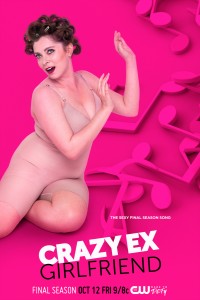 GARDNER: Yes. From the get-go. And I’ve always said, “There’s going to be room for Darryl, Darryl, Darryl fifth season, that’s my dream,” but I don’t think that’s happening. But we can dream, right? But I say that after the first episode. I was telling Rachel that we’re probably going to need to spin off in the [fictional] fifth season.

AX: After spending four years on a television musical, do you feel like, “Gee, I’d really like to do a stage musical,” or are you going, “I’d like to do something completely different”?

GARDNER: Honestly?  I’m definitely going to do something different, but we’ll see. The universe will tell me where I’m going, I don’t get to pick. But I am thinking somewhere down the line, you Broadway people out there, just know this is happening, I would love to play the rich uncle in a Broadway show where you just kind of walk on, you have maybe one song, and then if you dance, you’re just kind of like [demonstrates an easy step], and then pretty girls dancing behind you, maybe something like that. That’s my dream, if I get to do that, I’ll hope for that.

AX: Since you have a home base in Chicago, are you thinking, “Maybe I’ll go out for some Dick Wolf stuff next season – CHICAGO FIRE, CHICAGO P.D., CHICAGO MED …”?

GARDNER: If they’ll have me, I’m on. I’m in. I’d like to be in that fire show. I’d love to wear the fire outfit. I’ve got the moustache like a fireman – CHICAGO FIRE, yes [laughs]. My wife would love that, to be able to go back to Chicago.

AX: You mentioned having an earworm from CRAZY EX-GIRLFRIEND. Is your earworm also your favorite song that you’ve gotten to do on the show, or is that a different song?

GARDNER: Oh, I think “Getting By” would be my favorite song that I got to do, just because it’s had an impact on so many people in such a sweet way, and I’ve gotten so much lovely feedback from people that have come out to family, and played it for their family, and then been like, “That’s how I see myself,” or whatever. I love the fact that I’ve been a conduit for that, all the love that’s come back from that song, that I can filter it back to Rachel and the writers and all the people that created that song. 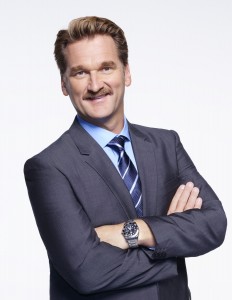 GARDNER: Yeah. I just finished a movie before we started to shoot [this season of CRAZY EX-GIRLFRIEND] called MAN CAMP in Colorado, and I’m not sure when that’s going to be coming out, but that was a blast to do.

AX: And what would you most like people to know about the fourth and final season of CRAZY EX-GIRLFRIEND?

GARDNER: Oh, just that I’m so thrilled to be doing it, and we’re having such a good time playing with each other, and we’re enjoying every moment that’s left.