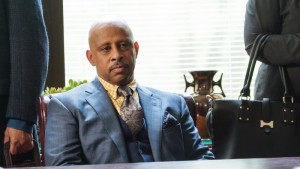 Created by Felicia D. Henderson and Charles Holland, THE QUAD is set at the fictional Georgia A&M University, a HBC (Historical Black College) where both the staff and students are caught up in life-changing events. Season 2 of THE QUAD launches on BET Tuesday, January 23, with university president Dr. Eva Fletcher (Anika Noni Rose) trying to figure out how to keep Georgia A&M afloat financially without having to merge with another school.

Ruben Santiago-Hudson portrays Cecil Diamond, the director of the university’s marching band. Santiago-Hudson, originally from Lackawanna, New York, has a career that spans multiple disciplines and mediums. As an actor, his films include MR. BROOKS, AMERICAN GANGSTER and an Emmy-nominated turn in THE IMMORTAL LIFE OF HENRIETTA LACKS. Santiago-Hudson has also had regular roles on LOW WINTER SUN and CASTLE, and he recurs on BILLIONS. He won a Tony Award for his work in the 1996 production of August Wilson’s SEVEN GUITARS. As a director, Santiago-Hudson was nominated for another Tony for last year’s revival of Wilson’s JITNEY and as a writer, the television adaptation of his play LACKAWANNA BLUES won a Golden Globe. He has also directed an episode of THE QUAD. Additionally, Santiago-Hudson is a musician and a teacher. He talks about bringing all of those aspects to bear for THE QUAD.

ASSIGNMENT X: What can you say about your character, Cecil Diamond, in THE QUAD?

RUBEN SANTIAGO-HUDSON: Cecil Diamond is the marching band director at this historical black college, and we’re the top in the nation. And so I take a tremendous amount of pride. I’m a very stern man, but I’m trying to build these students up to go out and wrestle with the world. So I’m trying to toughen them up. I’m a harsh guy, but I’m also a loving guy.

AX: The university marching band community is reported to be almost as competitive as the football community …

SANTIAGO-HUDSON: No, not “almost.” As or more. The marching band directors are the royalty of the campus, as much or more than the football coach. Because the football teams don’t play in front of the President, or the Queen, but the marching bands do.

AX: So how much is that aspect of the job a part of Cecil’s ego, versus how much being a stand-up figure and a leader for the band?

SANTIAGO-HUDSON: Well, I think they’re both married, but obviously, his success leads to a certain healthy ego. Because without that ego, he cannot even navigate his place with other marching band directors, who he daily competes with, monthly competes with. So he has to have a healthy ego and a certain amount of hubris, but also, he also understands that he is building young people into full adult people. And that is a responsibility Cecil Diamond does not take lightly, and Ruben Santiago-Hudson does not take lightly.

AX: Do you in real life feel that responsibility towards the younger actors who are playing band members?

SANTIAGO-HUDSON: Without a doubt. I am a mentor to several of them. One young lady is in now studying with me in New York. She left the show in December and took an apartment in New York to study with me for a couple months. So I mentor the young kids who come up under my wings and really want it. The ones that don’t, they find a mentorship somewhere else. But that’s part of my responsibility as a senior member of this cast.

AX: Part of the arc of THE QUAD this season is the university trying to find the funds to remain independent. Does Cecil feel a responsibility for helping with the economic shortfall, or does he feel that the school is obligated to help him?

SANTIAGO-HUDSON: Cecil Diamond’s band is the biggest moneymaker in that university. So I feel like I’m doing my share. That’s the way this character is written. I won’t back away from it, but I’m not going to give anything up, either. I’m saying, “I’m the moneymaker. Meet me halfway.”

AX: In real life, you’re also a musician. Does that knowledge factor into how you play the character?

SANTIAGO-HUDSON: Yes. I do a tremendous amount of research, and I can always bounce into my experiences as a musician, but more than anything, I take the script as my source and continue to do my research into historical black college marching bands, and the history of that tradition. And that’s been more than anything central, the history and tradition of the bands.

AX: When you got involved in THE QUAD, did you see the potential of its longevity, or did you just think this was a great character, or what was the draw?

SANTIAGO-HUDSON: Initially, the draw was [co-creator/executive producer] Felicia D. Henderson, who is the show runner and writer. Once we spoke, I knew that I wanted to be where she was, and when I spoke to BET about the direction they were going in. I thought at this point in my career, it would make me very happy to be a part of the trajectory of their network and raising the quantity and standards of what they thought they wanted to do, and where they were headed. So it was just a perfect time in my career to find my way to BET and to Felicia Henderson.

AX: Is the role of Cecil a good marriage of your acting and musical sensibilities?

SANTIAGO-HUDSON: I’m an ethno-musicologist. I like all kinds of music. But the thing is, like I said earlier, I have to incorporate what I know about life and who I am as Ruben Santiago-Hudson and bring that to the table, or else I’m shallow. So I bring all my experiences to the table – musically, acting-wise, educationally, culturally – and I try to be very specific about who I am and what I’m doing.

AX: What are the specifics involved with this that you are drawing from?

SANTIAGO- HUDSON: My advisor at Binghamton University, when I did go to school, was Loften Mitchell. He’s a great writer, he wrote a Broadway hit called BUBBLING BROWN SUGAR, among many plays. After the first year, I was transferred to Howard. And he sat me down in a pub one day. He said, “Loften Mitchell is not there. Wherever you’re going, Loften is not there. Loften is here, and he wants you to be with him.” And I stayed with Loften. And I stayed at Binghamton University, where I got my B.A. until I moved on and I got my Master’s at Wayne State. But I draw from every aspect of what it means to be an African-American man and artist, and I bring it to the character.

AX: Did you have the marching band experience when you were at college?

SANTIAGO-HUDSON: No. I did not. They did not have marching bands at state universities in New York. That’s a historical black college thing. And then some big universities in the South as well, but the black universities, Jackson, Grambling, Southern, FMU, Morgan, Hampton, they take a lot of pride in how they stack up as marching bands, because that’s their swag. “We can dance better, we play harder, we look better than you.”

AX: What is your musical area of expertise?

SANTIAGO-HUDSON: I’m a harmonica player. I play jazz and blues harmonica. But I was a disc jockey on the air for eight years, and I played everything from Top 40 to R&B to jazz to classical. I played everything. So I have a wide realm of appreciation of all kinds of music.

SANTIAGO-HUDSON: Yes. I’m getting ready to direct an off-Broadway play starring Blair Underwood this spring. It’s called PARADISE BLUE by Dominique Morisseau, who is one of the show runners at SHAMELESS. She’s a great, great writer. And then I go from that to direct Shakespeare in the Park at the Delacorte Theatre in New York.

SANTIAGO-HUDSON: I keep that gap open, and my prayers are for Season 3 and 4.

AX: And what would you most like people to know about Season 2 of THE QUAD?

SANTIAGO-HUDSON: Season 2 is fully exciting and deals with all the possibilities of what it takes to just be a whole human being, where African-American people are many times [portrayed as just] caricature or attitude. THE QUAD is way more than attitude. It’s multidimensional, it’s complicated, it’s sensitive. It shows African-American people not only as intellectual but compassionate, passionate, angry, happy, and it’s the full course of who you are as a human being when you eat the meal called THE QUAD.

This interview was conducted during BET’s portion of the Winter 2018 Television Critics Association (TCA) press tour.