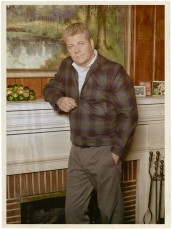 THE KIDS ARE ALRIGHT: Michael Cudlitz on his new series and THE WALKING DEAD – Interview

The actor also talks his character on SOUTHLAND 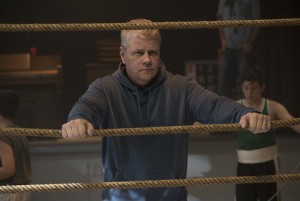 In ABC’s new half-hour comedy THE KIDS ARE ALRIGHT on Tuesday nights, creator Tim Doyle looks back at his own childhood. Doyle grew up in the ‘70s in Southern California as one of eight boys in a working-class Irish-Catholic family.

In THE KIDS ARE ALRIGHT, the family patriarch, Mike Cleary, is played by Michael Cudlitz. Cudlitz played the late, lamented Abraham Ford on THE WALKING DEAD; before that, he starred in four seasons of SOUTHLAND as dedicated but painkiller-addicted LAPD Officer John Cooper.

ASSIGNMENT X: Does THE KIDS ARE ALRIGHT remind you at all of your own childhood?

MICHAEL CUDLITZ: Yeah. I was born in ’64. I grew up in New Jersey in the ‘70s. For me, it was wonderful, what I want to call the lack of parental supervision. I always knew my parents were there, I always knew they loved me, but physically, they weren’t always there. And you grow up differently. I see it in my kids. I think there are pros and cons to each [era’s style of parenting]. I think my kids actually were able to hold onto their childhood a little bit longer, because they weren’t forced to grow up, and in a way, when you don’t have that parental supervision, you’re forced to grow up, you’re forced to deal with things in a way that you wouldn’t necessarily have to had they been there. It was like, “Hey, I’m going out until whenever,” and you’d take off, “I’ll see you tonight.” There was no real question. “I’m going to the beach.” We lived a bike ride, or a moped ride, twenty minutes away from the beach. No cell phones, no helmets, no bike lanes, no airbags, seatbelts, but you didn’t really use them, steel dashboards, riding in the back of a pickup truck with your buddies. I mean, all these things were stuff that we all did. I’m not saying that all those [new precautions] aren’t necessary and that we’re not glad that they’re around now, because we are, but it just meant you grew up differently. We all did. We all feel that difference. We didn’t have helicopter parents, and for better or for worse, it was just a different time.

AX: Having lived through that era, what’s it like to recreate that on a daily basis?

CUDLITZ: Awesome. We’ve been having a great time. These kids are great, Mary [McCormack, who plays family matriarch Peggy Cleary] is hilarious, and Tim’s writing really, really fun stories that have a lot of heart to them. So it’s been fantastic to come to work. 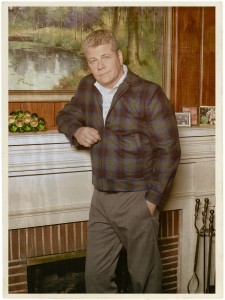 AX: How is working on a half-hour comedy schedule? It’s not 9 to 5, but it seems like a more abbreviated schedule than location schedules for one-hour dramas.

CUDLITZ: No, it’s not more abbreviated. It’s a single-camera half-hour, and we have eight kids. So even if it’s a lighter day, that day is still just as long, because of the needs of the kids, of having to go to school, and the breakup of all of that. So it’s an abbreviated schedule in the sense that we shoot five days a week, as opposed to eight – a typical one-hour is eight to twelve, depending on what you’re shooting, but we’ll shoot an episode a week.

AX: Is it at least more physically comfortable than battling mosquitoes outdoors in Georgia, where you were shooting THE WALKING DEAD?

AX: Do we know what Mike Cleary does for a living? He’s obviously not a cop.

CUDLITZ: Yeah. Obviously, not a cop [laughs]. He works in jet propulsion, the equivalent of JPL. [Tim Doyle] grew up in Glendale [California]. That is actually something different – I don’t think his dad was in the aerospace industry, but he’s a machinist.

AX: So are we going to see scenes of you fixing the plumbing, like Tim’s dad?

CUDLITZ: Probably. He’s very handy and expects that from his kids.

AX: With THE WALKING DEAD, when did they tell you that Abraham was going to die?

CUDLITZ: Both Steven [Yeun, whose character Glenn died at the same time as Abraham] and I found out six months prior. But when I came on the show – I’ve gone from show to show to show. That’s what we do. It’s not the first show I’ve died on.

AX: Oh, no. John Cooper on SOUTHLAND was in dire straits when we last saw him. Don’t tell us that …

CUDLITZ: John Cooper did not die. At all [laughs]. But yeah, we knew five or six months before. We didn’t know if it was going to be at the end of [Season] 6 or the beginning of 7, that was what they were deciding, whether they could keep that secret. And then we find out just before that it was going to be the beginning of 7, which was fine. It would have been fine either way for me.

AX: Did you watch your final scene in THE WALKING DEAD?

CUDLITZ: I watched it once. It’s pretty brutal. It’s a pretty emotionally and visually brutal scene, so …

AX: What would you most like people to know about THE KIDS ARE ALRIGHT?

CUDLITZ: It’s funny as hell, and it’s got a lot of heart.

Article Source: Assignment X
Article:  Interview with THE KIDS ARE ALRIGHT and THE WALKING DEAD star Michael Cudlitz on his new series