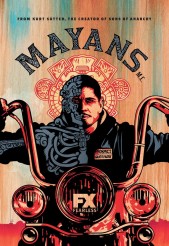 The executive producer talks about the new sequel series 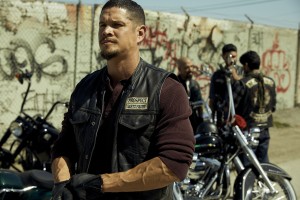 MAYANS M.C. is a follow-up to the hit series SONS OF ANARCHY. Set a few years after the SONS series finale, MAYANS M.C., now in its first season on Tuesdays and renewed for a second, follows the Reyes brothers, E.Z. (JD Pardo) and Angel (Clayton Cardenas), as they try to survive gang life in Los Angeles.

Kurt Sutter, who created SONS OF ANARCHY, felt that “as a white guy from New Jersey,” he needed a Latin-American partner to co-create MAYANS M.C. Sutter’s choice was Elgin James. James is actually of Dominican, Native American, black, and white ancestry, but he does have firsthand knowledge of gang culture. He had previously written and directed the feature LITTLE BIRDS and scripted the feature LOWRIDERS.

ASSIGNMENT X: How did you and Kurt Sutter come together to do MAYANS M.C.?

ELGIN JAMES: I told the story about me and my best friend starting a street gang, a true story, but I turned us into two fifteen-year-old girls [in] LITTLE BIRDS, with Leslie Mann. We did that through the Sundance Institute. Robert Redford and Michelle Satter from the Sundance Institute found me, took me from being a gang member to being an artist for the first time in my life, we made LITTLE BIRDS, I went to prison on an old gang charge, and then I came out, and that’s when Kurt found me.

I had just been out of prison for a few years. I was trying to piece my life back together, and trying to figure out how to tell stories again, and he had met with a bunch of people to try and figure out who would be a part of how to tell this story. I was just one out of, I don’t know how many, I think it was a lot of people that he met, and for whatever reasons, I’m not sure why, but I’m very thankful that he picked me. Coming from this world, and coming from basically a lifetime of violence, and being a victim of it when I was a child, to then being an aggressor as I grew older, I didn’t really want to tell stories about violence. I didn’t really want to tell stories about spending the majority of my life in a street gang. And then after my first discussion, and meeting with him, and realizing the opportunity of what we could do, and also to be mentored by him, I’m like, “The universe is telling me I actually have to tell those stories. There’s some emotional baggage that I need to deal with, and I need to get out.” To be honest, I couldn’t write on THE COSBY SHOW. I could never write on one of those shows, because I don’t know what it’s like to grow up in a functional family. I don’t know what it’s like to grow up in a supportive family. But I do know that I have the stories that I have to tell. I have this damage inside me that I have to get out. I make art for the people that society rejects.

AX: When you and Kurt Sutter disagree in the writers’ room, do you defer to him because of his experience, or do you argue, or how does it work?

JAMES: [laughs] No. Part of him being my mentor is, I just trust him implicitly, and I’m just here to learn. So there really hasn’t been much that we have – because it’s his universe, it’s the universe that he created, and we’re trying to create a new world in it, as he keeps saying, but especially for this first season, we’re also getting our feet, from the actors to the writers. We’re coming into the world that he and a bunch of really smart, really talented people created, while trying to sink the flag in the ground as our own world and our own voice, we’re still operating within their universe.

What’s beautiful about what my mentor and leader Kurt has set up here is, ever since I was a kid, I’ve been watching black and brown characters on television who have been become these criminals and these one-dimensional characters. And a lot of the people on MAYANS M.C., both in front of the camera and behind the camera, actually grew up in the cycle of poverty and violence and then incarceration. I did. And so this is the first time we get to tell our stories from the inside out, which is incredibly important to me, because this is the first time we get to put a human face to it.

AX: Were you a fan of SONS OF ANARCHY before you got involved with MAYANS M.C.?

JAMES: I was. And I was a big fan of THE SHIELD as well, where [Sutter] started with Glen Mazzara and Shawn Ryan and all those people. It was my favorite TV show. So to be part of that lineage, it’s really, really amazing to me. And again, of having grown up in proximity to this world, and the one-percenter world, and my friends being involved with [gangs], and my brothers going that route, again, was some reason why I didn’t want to have to tell the stories, and so again, I realized, I have to tell the stories.

AX: Edward James Olmos plays Felipe, the patriarch of the Reyes family. Are you excited to have him in the cast?

JAMES: Oh, my God. Eddie is phenomenal. I even get to call Edward James Olmos “Eddie” – it’s crazy. He’s one of the greatest actors that we have in the world, and someone like Emilio Rivera [as Mayans leader Marcus Alvarez, who first appeared in SONS OF ANARCHY], especially for a lot of us that have had troubled pasts, or made some choices, and to see these men, and what they’ve done, and then what they’ve gone on to do, has been incredible for all of us, from myself to the actors. These two men have been mentors before we even met them. So basically, it’s a path for us all to have jobs now.

AX: Was there anything that you either had to learn about, or learn how to do, in order to co-run the writers’ room?

JAMES: Yes. I spent a month in a writers’ room that was a mini-room with Jason Katims, who was phenomenal, and also has been a great mentor to me. I learned so much within that month. But [with MAYANS M.C.], I got put into a situation where I’m in a room with a bunch of people who have way more experience than I do, probably are way smarter than I am, and to help run that room, that’s been incredible. I learn something every day. They writers use [unfamiliar] words all the time. They’ll be like, “You need to give the character more agency,” and I’m like, “Cool, what’s that?” [laughs] So I’ve learned so much every single day. And then what happens is, you have a bunch of really smart people in the room, trying to figure out this small problem. We’ll spend all day on it, and then you have someone like Kurt Sutter, he’s just so brilliant and such a savant, he comes in and just solves it with three words.

AX: The characters go back and forth between Spanish and English dialogue. Do the writers have discussions about when they would be speaking which, do you leave that up to the actors …?

JAMES: It comes in the room, and it’s all organic. The majority of our writers in the room speak Spanish, but there will be families, even with the M.C., there are a lot of people who grew up in my generation, the [younger] actors’ generation, who don’t Spanish. They had parents who wanted their kids to assimilate, so they didn’t teach them Spanish, they spoke English in the house. So we’re trying to be true to that. But our characters who are from Mexico of course speak a lot of Spanish.

AX: Where do you shoot MAYANS M.C.?

AX: And what would you most like people to know about MAYANS M.C.?

JAMES: Just that we’re trying to tell our own truths. The first thing we want people to know is, it’s not a Latino show. The majority of people may be Latino on it, but it’s a show for anyone who feels diminished or underestimated in their lives. A lot of us know the status quo is bulls***, and now, for an hour a week, you can watch people who get to make their own rules and create their own justice. So it’s for anyone who feels they’ve ever felt they were “lesser than.”