The actor talks being non-binary on screen and in life 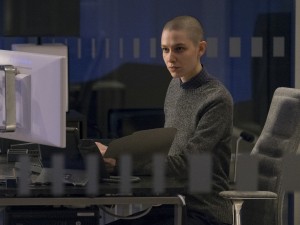 Showtime’s BILLIONS, now in its third season Sunday nights, has been renewed for a fourth. BILLIONS revolves around the personal lives of and legal mortal combat between New York venture capitalist Bobby “Axe” Axelrod (Damian Lewis), chief of Axe Capital, and ADA Chuck Rhoades (Paul Giamatti), who are each trying to take down the other.

One of Axe’s most trusted lieutenants is Taylor Mason, played by Asia Kate Dillon. Both the character and the actor identify as gender non-binary (neither male nor female) and Taylor is the first non-binary regular character in a major television series.

Dillon, a native New Yorker, was previously a regular on ORANGE IS THE NEW BLACK and is known for their stage work. They discuss both the overall nature of representing non-binary people and the intricacies of Taylor’s character.

ASSIGNMENT X: When do you look for in a character you want to play?

ASIA KATE DILLON: I look for a couple of things. I look at the content of the project itself, whether it’s something that speaks to what I’m trying to do with the art that I make, which is to uplift and support historically marginalized, historically disenfranchised people, and then I look at who I get to work with, who the director is, who the cast is, the crew, and then on top of that, is it a character that I’ve played before? Which isn’t to say that I wouldn’t play a similar character more than once, but it would really have to mean something and be for the right reasons.

AX: In Season 3 of BILLIONS, Taylor is invested with a lot more power at Axe Capital. How much do you think Taylor is motivated by the joy of displaying their skill, and how much is loyalty to Axe, and how much is the heady addition of power that wasn’t there when Taylor came into the firm?

DILLON: I think one of the reasons that Taylor decided to stay at Axe Capital in Season 2 is because Axe sees something in Taylor, recognizes Taylor’s potential to really rise in many ways, and quickly, and I think Taylor just picks up on that opportunity and runs with it, because that is where Taylor finds joy. Taylor loves working – that’s where Taylor’s joy comes from. And I think that the ego that starts to come out of Taylor – it begins in Season 2, and we see it more in Season 3 – the environment of Axe Capital is really starting to affect and infect Taylor, and watching Taylor navigate that very slippery line of power, and when it corrupts, and when it corrupts absolutely, or does it, how? That’s one of the interesting things about Taylor’s journey in Season 3.

AX: Do you think Taylor is playing for the wrong side on Team Axe, or do you think this is all so morally ambiguous that there isn’t a right side?

DILLON: I think that, well, there isn’t a side. Taylor, I think, lives in a place where they don’t feel like they have to choose, because also, there are things that Chuck Rhoades does that are morally reprehensible, and illegal, frankly. So for Taylor, it’s about the laws around hedge funds, venture capitalism, all of that, why are those rules in place? What are they meant to do? What are they supposed to do? What does it mean to have a free market? I think all of that is part of what makes the show so watchable. It’s like, why is it illegal for Axe to act on inside information, but it’s not illegal for Chuck to make a deal? Why is the law the way that it is? I think that’s one of the things that makes the show so fascinating, and really poignant for where our culture is at right now.

AX: Taylor seems to be more acceptable in conservative circles than other non-binary people might be. Do you think this is partly because Taylor makes money for people?

DILLON: Well, I can only sort of guess to an answer to that, but I would say, yes, that is part of it. I also think that Taylor is palatable because, I, the actor, was assigned female at birth, I’m light-skinned, white. I’m not someone who was assigned male at birth, a person of color, who’s wearing dresses to Axe Capital. If Taylor is a bridge, I think Taylor is a really good bridge, because people are more accepting of white people who are assigned female at birth playing with gender fluidity, or being non-binary.

AX: Do you often find yourself in the position of having to educate people around you about aspects of non-binary people?

DILLON: Well, I would say, I’m always learning all the time. So any conversation I’m having that would be me being the teacher, I’m learning from the other person where they’re coming from, what their story is, how they feel. If it were just me being a teacher all the time, I think I would get frankly really bored of hearing myself talk all the time [laughs]. For me, it’s really about the conversation, relating to other people.

AX: Are you getting a lot of positive responses from people to your portrayal of Taylor? 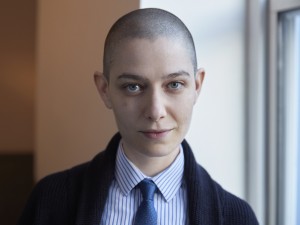 AX: Is there any pressure in being the sole representative for non-binary people on scripted TV right now?

DILLON: It doesn’t put pressure on me, it’s actually just buoying. It gives me a lot of levity. I’m really proud, and I’m also grateful, and I try to be as humble as possible. For me, when I see other people living in their freedom, it gives me permission to live in my freedom. And so, because I know how that feels, I live in my freedom, because I know it helps other people live in their freedom. Because we’re all connected, and that’s how it works. So it doesn’t feel like pressure, it just feels like buoying excitement.

AX: Do people come to you for financial advice?

DILLON: No. And they shouldn’t [laughs]. Because that’s one of the fun things about playing Taylor is that they have genius in areas that I don’t. So I get to learn about. It’s one of the great things about being an actor, right?

AX: What have you learned from being in BILLIONS?

DILLON: In terms of finance, my knowledge of Wall Street or hedge funds was totally peripheral, or from what I saw in other films and television. I would just say now, I don’t have as much knowledge as Taylor, but I know what a word means that I didn’t know before. I haven’t invested in anything yet, but the fact that I’m even sort of considering it is something that, many years ago, I wouldn’t have thought I would even consider.

AX: How much input do you have into Taylor’s wardrobe?

DILLON: It’s a collaborative experience in the sense that, if I’m not comfortable, or I put something on and I go, “I don’t think this is right,” they would never force me to wear it. But the costume people that we work with are so brilliant that I don’t know if there really ever has been something I’ve put on that doesn’t feel right. Taylor is hoping to walk into a room and be seen as a person first, and I think one of the ways Taylor achieves that is by dressing in a way that does as much as they can to hide their outward [gender] characteristics. It’s not meant to confuse people, it’s just meant to make sure that people are looking at Taylor in their eyes [laughs].

AX: In real life, you have a tattoo of a word that is covered up by makeup when you’re playing Taylor. What does the tattoo mean?

AX: Is it German?

DILLON: Yeah. German philosophers in the mid-1850s were the first Modernists to say that empathy is what is needed for interpersonal relationship success, and so German is actually the first language to adopt the word “empathy” out of Latin, and I just thought that was really fascinating.