The actors chat about the WGN American series 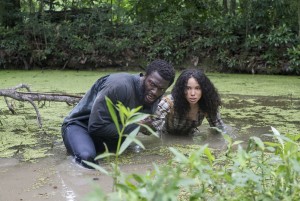 In Season 2 of WGN America’s UNDERGROUND, which concludes Wednesday, May 10, things have gotten even more dangerous for the main characters. Escaped slave Rosalee, played by Jurnee Smollett-Bell, is now working in the Underground Railroad with Harriet Tubman, played by Aisha Hinds, to help other slaves flee to freedom. Meanwhile, Noah, played by Aldis Hodge, who changed his own plans to help Rosalee, has spent time in prison and nearly been executed, all of which has a major effect on him.

Hodge and Smollett-Bell sit down to talk about their characters in UNDERGROUND’s second season, as well as what the show has to say to contemporary America.

ASSIGNMENT X: What would you say are the big differences in attitude for Noah and Rosalee in Season 2 from Season 1?

ALDIS HODGE: I would say for Noah, he has the same goal, different intention. It’s still freedom, but his idea of freedom is Rosalee, it’s no longer just being out of bondage, it’s Rosalee. So you’re going to see all these months of being cooped up in a prison cell [laughs] ferment through his actions and his choices. But he learns, he explores different situations. He’s put in situations emotionally that he never expected to be in. So we’re going to see his evolution over time with how he comes to understand life, because for him, life is very different in terms of trying to escape again, trying to understand what Rosalee means in terms of family and his overall goal of freedom.

JURNEE SMOLLETT-BELL: I think at the end of Season 1, it really dawned upon Rosalee that freedom ain’t free, and that when she says to Noah, “We’re not free until we’re all free” – we lost everyone. We lost the Macon Seven comrades, I lost my mother and brother, found out my oldest brother was lynched, and then I end up losing Noah. So when we meet Rosalee at the beginning of Season 2, she’s trying to put the pieces back together. And she’s been on the run with Harriet, being trained on how to navigate this complex [underground railroad] network.

AX: Is observing Harriet giving Rosalee new ideas about what it means to be a woman and to be free?

SMOLLETT-BELL: Absolutely. Harriet takes Rosalee under her wing, and really trains her up with the intention of Rosalee going back to get her family. But Rosalee wants to make a detour and get Noah first, so that Noah can come and help as well. But really, it’s because Rosalee has realized she cannot be a whole, complete person without having her family completed. And I think the difference between Season 1 Rosalee and Season 2 Rosalee is, Rosalee has become a soldier by Season 2. And she’s running into danger. That’s what soldiers do – they’re on the front lines, running into danger. In Season 1, she’s running away from it. 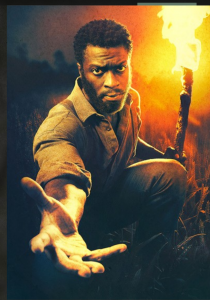 AX: Do either of you have anything as physically horrific this season as some of the stuff that happened last season?

HODGE: We can’t be specific about what exactly the things are.

SMOLLETT-BELL: Yeah. I can’t be specific, but it was definitely more challenging, it was more physically challenging than I’ve ever been in my life, and it’s not just because I was pregnant.

AX: When did you have your baby?

SMOLLETT-BELL: [In November.] It was a boy. His name is Hunter Zion Bell. But I was pregnant throughout Season 2, the entire time. And we were racing to finish.

AX: Did they have to dress you to disguise this, or is Rosalee pregnant also?

SMOLLETT-BELL: Why do you think I’m in pants? [laughs] Yeah, we definitely were trying to navigate television magic, with all of that connected [costuming to hide the real-life pregnancy].

AX: It seems like it would make more sense for Rosalee to be in pants anyway, because Underground Railroad, running, running’s easier in pants …

SMOLLETT-BELL: Yeah, although there were women who ran in long dresses, long petticoats, and ran in corsets in that time. But yeah, character-wise, there is a real legit reason I am in pants. 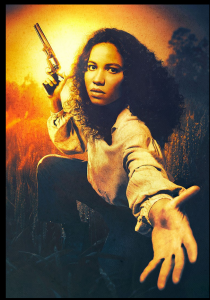 AX: And do you have to deal with prosthetics, because Noah got pretty badly banged up in Season 1?

HODGE: Yeah. There are some prosthetics going on. We go back to the scars, we go back to the tattoos a little bit, but in terms of new wounds, new afflictions, I can’t speak on that right now.

AX: With Anthony Hemingway directing four episodes again this season – he also directed four in Season 1 – did some of this just feel like you were on one long movie, because you were coming back to the same director again and again?

SMOLLETT-BELL: Did Anthony only do four? I thought he did more. It’s hard for me to keep track.

AX: He’s also an executive producer, so he might have still been there when he wasn’t directing …

HODGE: He was there the whole, entire journey. Especially when there were guest directors, he was always a sounding board in terms of, if we needed guidance off another director, he was making sure that our characters storylines were on track, which was fantastic, because he understands the fiber of the show I think more than even we do at times. It did feel like a mini-movie, because things moved so fast. We only did about three-and-a-half months of shooting, almost four months, and typically for a series, you get five or six months. So everything moved really, really fast, a lot of work to do in a very small space [of time], and it felt like a very high-pitched action film.

SMOLLETT-BELL: Yeah. And I think having Anthony on set just created a comfort and a security – I know for me, there were times when it was like, okay, juggling the whole physicality of it all, with our amazing stunt coordinator Tierre Turner, the physicality of it obviously was even more challenging for me [due to pregnancy]. And there were just times where I just trusted Anthony [laughs], and I was like, “All right, I can do this,” or “All right, I’ll sit this one out,” or “All right, put me in.” And I think he’s so incredibly passionate. When I wrapped, we wept, because it was like we had gone on such an intense excursion together.

HODGE: I’m glad to hear that, because I almost got choked up. I did get choked up when I wrapped. And I was like, “Am I losing my thug card? What is going on here?”

SMOLLETT-BELL: [laughs] No, no. I know. I absolutely cried. Because it felt at times like we weren’t going to be able to finish, and we did it. We completed it. We had to fight everything from Hurricane Matthew to the clock ticking.

AX: Do you think with what’s happened in the U.S. recently, the conversation about UNDERGROUND has gone from, “Well, what would I have done?” to “Well, what should I do?”

HODGE: I will say that I think [viewers] will start tying in the relevance of what’s going on there to what’s happening in the country, and that conversation will resound. If it does at all, I think people will tie in the relevance their actions, and how they need to be more prominent in their involvement with the future of their country.

SMOLLETT-BELL: Yeah. And I think you’ll see – in 1858, we lived in a very divided nation, and the enemy to justice is silence. When we are silent, and when we give our power away, that’s when injustice prevails, and that’s when hate can be so easily spread. But I think we all have to become soldiers. We can’t sit this out. 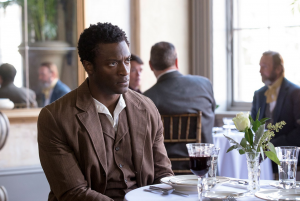 AX: What would you most like people to know about Season 2 of UNDERGROUND?

SMOLLETT-BELL: The stakes are even higher. Like we said earlier, about Season 1 was about running away from the danger, and now we’re running into the danger, so it only made for a crazier story.