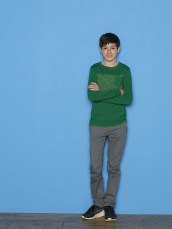 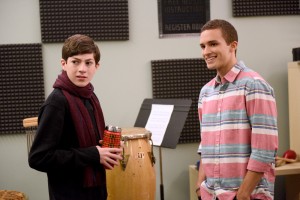 Mason Cook plays Ray DiMeo in ABC’s Wednesday night half-hour comedy SPEECHLESS. The series has won acclaim – and a Writers Guild of America nomination – for its humorous, insightful portrayal of a family with a special needs member.

Ray is new in his high school, experiencing first love and astronomy. Ray is also trying to get a little more recognition from his parents, played by Minnie Driver and John Ross Bowie. It’s not that Mom and Dad don’t love Ray and his sister Dylan (Kyla Kenedy), but their attention is primarily focused on their other son JJ, played by Micah Fowler. JJ is also a high-schooler; he has cerebral palsy, which means he is in a wheelchair and requires aid in speaking, though there is nothing whatever wrong with his mind.

Cook has been nominated for a Daytime Emmy for his work in THE HAUNTING HOUR. He’s also had major roles in the films SPY KIDS: ALL THE TIME IN THE WORLD and THE LONE RANGER and had arcs on THE MIDDLE, LEGENDS and THE GOLDBERGS.

ASSIGNMENT X: Do you feel that SPEECHLESS is told at least partly from your character’s point of view?

MASON COOK: The show does definitely focus on my character trying to get his mom to recognize him and ask for his opinion, as seen in the pilot of course, just have some attention towards him from his parents, because he feels like he’s definitely being put to the side a lot. I feel like the show definitely does show him and the connection with his mom does progress and get better and definitely does what he wants her to do.

AX: Does Ray ever resent JJ, or is he just annoyed at his parents for always making everything about JJ?

COOK: I don’t think he ever resents [JJ]. They’re siblings, they’re brothers, we’re best friends in real life. I feel like he definitely does need attention because of his disability, but at some point, you have to think about who else is here and who else you need to pay attention to, and who else you need to recognize. And I definitely feel like that’s how he would feel. I don’t think he would ever resent JJ.

AX: Ray is an astronomy buff. Do you have any interest in astronomy, or is the show making you investigate astronomy now that you’re doing the character?

COOK: Now that I’m portraying a character who is in love with astronomy, I’m recognizing how cool it is, and how the scientific aspect of it, I did lots of research before I filmed the pilot, just to make sure that I had all my facts straight, and I feel that it’s definitely something I didn’t think about too much before I started the pilot, and once I did, I really started to enjoy it, and it’s really cool.

AX: What have you learned about astronomy that’s been most interesting to you?

COOK: The different star constellations and planets and, personally, is there life out there? I don’t know. I don’t want to be one of those UFO [conspiracy buffs] who’s like, “Yes, there is,” but who knows? If we’re here, there has to be someone else.

AX: There’s a scene in the pilot where Ray gets stuck on a carnival ride. Did you get sick when you were going up and down, take after take?

COOK: I didn’t, thank God. But a few weeks later, I went to Disneyland with my family, and we went on Tower of Terror, and that was probably like four times worse than the one that I did in the pilot. The pilot was like nothing compared to Tower of Terror. That one, I went on a million times, but Tower of Terror I probably went on twice.

AX: Have you ever played a character like Ray before?

COOK: This character is definitely unique from the other characters that I’ve played. He has a specific personality that I really enjoy about him. He is a normal kid, he has crushes on girls, he doesn’t know how to talk to them. He will explode when he needs to, when he’s frustrated, he will get very angry, and I feel like that’s a very important aspect of him, and also how much he loves his parents and his family, and at the end of the day, he would put them first before anything else.

COOK: It’s a show that is definitely different from any other show on TV right now, seeing as how this is very important, because it shows a family who has three kids, one of whom just happens to have cerebral palsy, which is very common in America, but is not represented on TV as much as it should be. This show is definitely showing the real side of that lifestyle, and the connection with people who have seen and watch it has been phenomenal.