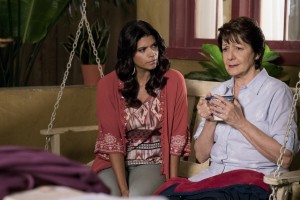 Ivonne Coll notably began her feature film career as the alluring Yolanda in THE GODFATHER PART II. Since then, the actress from Puerto Rico has worked steadily in film, television and stage. Currently, Coll is in her third season as one of the stars of The CW’s JANE THE VIRGIN, which resumes Monday January 23, as Jane’s beloved abuela (grandmother), Alba Villanueva.

The deeply religious Alba wasn’t thrilled when her daughter Xiomara (Andrea Navedo) became pregnant outside of marriage, but Alba is devoted to Jane (played by Golden Globe winner Gina Rodriguez). When the then-virginal Jane became pregnant due to a mix-up at the gynecologist’s office, Alba was at first ready to declare the conception a miracle. Now Jane is married to the staunch Michael (Brett Dier), but still working with baby Mateo’s father, hotel owner Rafael (Justin Baldoni).

Coll also had a guest-starring arc as formidable monster hunter Araya Calavera on MTV’s TEEN WOLF, now in its final season Tuesday nights. At a party thrown by CBS for the Television Critics Association, Coll talks about both these very different characters and more.

ASSIGNMENT X: Going into Season 3 of JANE THE VIRGIN, what were you most looking forward to?

IVONNE COLL: Taking care of Michael, after his ailment, and to provide for my granddaughter the most stability I can. She’s going through such a precarious moment in her life, recently married and having this problem. I’m looking forward to that, and also working in the gift shop of the Marbella Hotel.

AX: How are you enjoying working with Aiden Fernandes, the infant who plays Alba’s great-grandson Mateo?

COLL: [laughs] You know, I often think of W.C. Fields [who famously advised against working with children]. But in this case, he is incredible. I think that the young Mateo – his first words last season – he goes, “Action!” And we go, “Oh, my God!”

COLL: A year. I said, “Oh, my God, these are his first words in public!” “Action!” It’s so funny. And then when we’re doing the scene, and I get him out of the scene, and we’re waiting for the scene to end, he stays like this [demonstrates complete calm]. And then when they say, “Cut,” then he activates himself. Isn’t that amazing? And he’s a year. Now he’s going to be older, because the months have passed.

AX: With all of the other characters having such complicated love lives, Do you think Alba is going to have any romance?

AX: And is Alba at all angry at Rogelio, played by Jaime Camil, for getting Xiomara pregnant with Jane way back when?

COLL: I’m a fan. That’s how we know about [Rogelio’s character], because he’s a soap star. I’m mad at her for just screwing around, for playing around, but Rogelio, I’m his biggest fan. And because I’m a fan of the soaps that he’s in, before I knew that he was my granddaughter’s father. Only Xiomara knew that. By the time she says it, I go to confront him, and then he wins me over with a basket full of things with his name.

[Gina Rodriguez yells, “I love you so much, Abuela!” as she leaves the party.]

COLL: That was my granddaughter trying to say goodnight also. I mean Gina. I’m not a real abuela in real life, so … [laughs]

AX: How did you enjoy playing the monster hunter on TEEN WOLF? That seems like a very different sort of character …

COLL: I loved doing TEEN WOLF. It was one of the most rewarding experiences for me as an actor, because usually, when Hispanic actresses get old, we only play abuelas. And for [TEEN WOLF creator/producer] Jeff Davis to have given me that part of Araya Calavera, it just helped me to explore a lot of things. I’ve played Mother Courage on stage at Berkeley Rep and La Jolla, so it’s like you take your theatre training and your theatre knowledge, and then you put it into that kind of character, because they don’t come that often, those characters, for Hispanic actors of my age. So I went to town with it. And I like the fact that she is protecting her border, when she says to [the main character], “You don’t cross my border, I will not cross yours.” Because they cross her border to Mexico to eat her cows and her sheep, everything that she has there. So I really love Jeff Davis for giving me that character. I adore him. I think it’s one of the most incredible parts I’ve ever played on TV in American television.

COLL: Today I was talking to somebody about that show. They’re going to their last season now, and I don’t think that storyline is going to come back. But I told Jeff, I said, “Why are you not killing me? I have a new show [JANE THE VIRGIN], I can’t come back.” And he said, “Even if I kill you, I can bring you back, because this is that kind of show.” I’m like, “Okay.” I’d love to work in there. And all those young actors, oh, my God, so dedicated and so serious about their craft.

AX: Back to JANE THE VIRGIN, do you feel a sense of ownership on Alba’s house set at Raleigh Studios in Manhattan Beach?

AX: And what would you most like people to know about JANE THE VIRGIN Season 3?