The actor talks his change-of-pace role 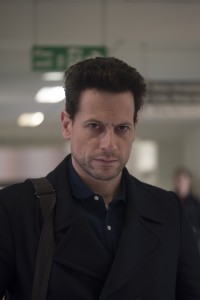 This interview could not be run until after the third episode of SundanceTV’s six-part miniseries LIAR had aired on Wednesday, October 11. This is because, in the first two episodes of LIAR, we cannot tell whether the title applies to high school teacher Laura Nielson, played by Joanne Froggatt, or surgeon Andrew Earlham, played by Ioan Gruffudd. Actually, on some level, it applies to both of them, and their friends and family as well – everyone in LIAR has secrets – but there is a central issue in the drama created by Harry Williams & Jack Williams (who also created Starz’s THE MISSING). After what both agree started as a good first date, Laura and Andrew went back to her place. Andrew says they had consensual sex. Laura says she woke up in the morning to discover that she’d been drugged and raped. In the third episode, we find out what happened. Don’t read further if you don’t want to know.

There is a potential spoiler for those paying attention in the end credits of each episode of LIAR, in which several rape survivor support organizations are thanked. It seems unlikely that such agencies would want to help out with a story about a woman who falsely accuses a man of rape, so one might correctly surmise that Laura is telling the truth and, more, than Andrew has done this before.

ASSIGNMENT X: Were you excited about playing somebody who’s not quite so upstanding?

IOAN GRUFFUDD: Yes. What’s interesting is that I’ve always wanted to play these sort of delicious parts, but too young-looking, didn’t really get those opportunities ten years ago. And now I’m finally meeting these parts as a forty-three-year-old. I was actively looking to play somebody a bit more masculine, that’s a little bit more ambiguous and a sort of an antihero, and then this sort of fell in my lap, so I’m over the moon.

AX: Did playing former surgeon/current coroner Henry in FOREVER help you with your surgical skills?

GRUFFUDD: [laughs] What’s funny – I was talking to the guy that helped us in the few scenes that we had in LIAR, and he’s a doctor himself and a surgeon himself, and he said, “What’s interesting is, when we dramatize a dramatic event in surgery on television, it’s always very dramatic. In surgery, everyone is very quiet, very still – it’s the opposite.”

AX: Andrew makes some interesting choices within LIAR, because he’s almost wolfish when he’s coming on to the police detective.

GRUFFUDD: At the end of Episode Three. Yes, I think the idea is there in the first two episodes, it’s sort of ambiguous, we’re not sure where we stand, and then towards the end of Three, there’s something a little bit off here. Why would you do that, why would you invite her out for a drink? You can justify it from Andrew’s point of view of, “Oh, what a relief [that no charges are sticking], oh, my God.” And [the detective is] very hot. But for us as an audience, we’re meant to go, “Oh, that’s a little bit creepy.”

AX: He also has a manner in that scene that we have not seen before. Did you discuss that with the writers, was that written into the script, or …?

GRUFFUDD: What’s so beautiful about these guys’ writing is, it’s there. We didn’t have to manufacture any of this, or create, or improvise. It’s all there. It was just fine-tuning it on the day. So yes, I played that scene very, very charming, and nothing to see here, and very, very sweet, and then I played it with a little bit of, “All right, okay, you don’t want to have a drink, see you later.” Like, what’s that about? So we did a couple of different versions.

AX: Is that true of most of the scenes in LIAR, where you have a couple of different interpretations?

GRUFFUDD: For me personally, yes. In the opening three episodes, certainly, I would play it like, “Why the hell would I do this, this is crazy,” and then we’d do a version where I’d go, he’s right to be angry, because he’s being accused of something horrible.

AX: Because only five percent of rape cases ever go to conviction, and we see in the closing credits that a rape center was consulting on this, one assumes that most people would not want to make a drama that discredits women …

GRUFFUDD: No. Ours certainly doesn’t do that. We handle the subject matter, as you’ve seen, very sensitively, and she is no victim by her actions in those first three episodes, but for the future of the show, in the future episodes, there is no ambiguity whatsoever. At the end of Episode Three, we suspect. At the end of Episode Four, it becomes very, very real, what’s happened here, and it’s a very satisfying ending.

AX: Do you think there’s a responsible way of doing it if the story had gone the other way, or do you think right now, that would not be responsible filmmaking?

GRUFFUDD: I can’t imagine turning that story – I certainly can’t imagine men writing that story. I think in this day and age, there’s so much focus on this, justifiably so, thankfully so, that people have the confidence to come out and talk about this, and there certainly is a need to educate men, young men, that this isn’t the way to behave.

GRUFFUDD: I’m heading tonight to Australia on a plane to Brisbane to do a show called HARROW, to play another forensic examiner.

AX: [laughs] Have you found your niche?

GRUFFUDD: [laughs] I have found my niche. But it’s a sort of a more straight up-and-down procedural, with a beautiful serialization of his relationship with his ex-wife and his daughter, who’s run away from home. And there’s a case that comes to him at the end of the first episode that he may have something to do with.

AX: And what would you most like people to know about LIAR?

GRUFFUDD: I’d love people to see LIAR, because at the end of the day, it’s entertainment. It keeps you guessing at every turn. You’re made to feel intelligent and smart as an audience member, we don’t knock you over the head, we don’t take you don’t a red-herring road deliberately. We allow you to think about the subject matter, and in the end, it’s concluded in a very satisfying way.

This interview was conducted during SundanceTV’s portion of the Summer 2017 Television Critics Association (TCA) press tour at the Beverly Hilton Hotel.