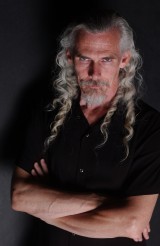 The actor talks his iconic role as a terrifying Gentleman 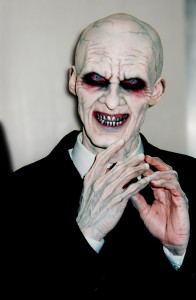 This year marks the twentieth anniversary of Joss Whedon’s groundbreaking, cult-adored, academically-studied TV series BUFFY THE VAMPIRE SLAYER. The series, which ran for five years on The WB and another two on UPN (both of which have since merged into The CW) starred Sarah Michelle Gellar as Buffy Summers, an initially reluctant Slayer who was destined to kill monsters and prevent the end of the world (a lot) in the town of Sunnydale, California.

Camden Toy played three of Buffy’s most iconic nemeses, and then went over to the BUFFY THE VAMPIRE SLAYER spinoff ANGEL to play yet another monster. On BUFFY, along with Doug Jones, Toy was one of the silent, ever-smiling Gentlemen who stole people’s voices and then cut out their hearts in the memorable Season 4 episode “Hush.” In Season 7, Toy played the skin-eating, sing-song-taunting Gnarl, and then the first of the menacing Ubervamps. Then he was brought over to bedevil ANGEL’s eponymous hero (David Boreanaz) as the ancient vampire the Prince of Lies. 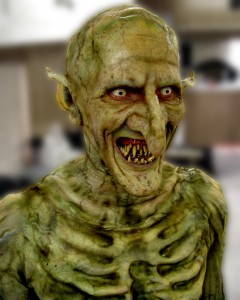 In Part 1 of a phone interview with Toy, he talks about his start in the Whedon-verse.

ASSIGNMENT X: How did you get cast as a Gentleman?

CAMDEN TOY: Doug and I are often asked that, and we both have similar answers. It was pretty much through what we think of as the normal channels in Hollywood, which is a show or a film puts out a casting notice, agents see it, or managers see it, and they then submit their clients for that project. The casting people then pick who they want to see. So we got picked to come in and audition for it. The call I got from my agent was, “Hi. BUFFY THE VAMPIRE SLAYER wants to see you tonight at six o’clock.” And that’s unusual, as you probably know. Film and television generally give you at least a day, maybe two [laughs]. They were like, “It’s tonight,” and I asked, “What about a script?” “There’s no script, just go.” So that’s how that happened.

The original name of the Gentlemen was not the Gentlemen, it was the Laughing Men, if I remember correctly, and Lonnie Hamerman, one of the casting people, made sure she sat us all down and [instructed], “Okay, there’s no dialogue in this episode, guys, so don’t laugh in the audition.” Sure enough, several of the people who went in to audition, we could hear them in the next room, laughing. We thought, “That’s odd, she just told us not to do that.” So on BUFFY, unlike a lot of other television shows, at least all the auditions I ever did with them, they never recorded, they never videotaped the audition. It was always a very small group of people. In this case, it was Joss and Lonnie Hamerman. That was it. So Joss just made the decision in the room, with whoever he saw. We were told by Lonnie, “Okay, it’s going to be an improv, you’re going to float in …” We were like, “Okay, we’ll see what we can do.” “You have to float in, and you have a doctor’s bag, and you take the scalpel out of the doctor’s bag and cut the heart out of this young man, and you take the heart, and all the while, you’re smiling.” So I’m like, “Okay …” [laughs] So I did that, I did the illusion of floating in and cutting out the heart and floating back out, and Joss kind of waved me away and was like, “Okay, thank you, thanks, thank you, I’m going to have nightmares now, thank you.” And from what I gather, Doug Jones had a similar audition. From what Joss has said, both Doug and myself scared him so much in the room, just with no makeup in broad daylight, that he knew, “Okay, these two guys are definitely gonna be really good.” [laughs] So that’s how I got cast. It was one of those serendipitous things where I got the call that day, I was able to go in, they saw me, the very next day, I got cast. 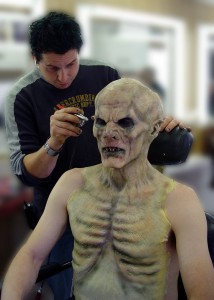 AX: Wasn’t there an issue with the Gentlemen’s smiles and their teeth?

TOY: Yeah, I remember asking Todd McIntosh, the key makeup guy on the show for many seasons [about the teeth]. He said, the original design was sort of a plastered-on smile over our regular smile. If you remember, there are six of us altogether as the Gentlemen. So four of them do have that plastered-on smile. Doug and I have our actual smiles, we have full articulation of our mouths. And the reason for that, according to Todd McIntosh, was that they were concerned, the producers and the makeup people, that the actors just couldn’t keep a smile for that long. Doug and I have no problem with that.

[The practical prosthetic makeup company] Optic Nerve was doing the build and the design of that, and they brought the design to Joss, and of course, the way that works on film and television is that before you start building all of it, you get the final approval from the executive producer. And Joss was like, “Wait a minute. The reason we cast Camden and Doug was because those two scared me so much with just their smiles. Now you’re hiding their smiles. No, you can’t do that. You have to change this.” And this was days before we were shooting. And Optic Nerve [said, “We don’t have time to] change them all.” And Joss said, “Okay. But you have to change Camden and Doug.” Which they did. And so it ended up that we had full articulation of our mouths. The teeth that they ended up using – because they had taken molds of our teeth – they actually made these very, very thin veneers that clicked in over our teeth, so they didn’t have to take time painting our teeth silver, which would have been extremely time-consuming. I’ve certainly been on sets where they’ve done that, but this was a much smarter way to go. And they also weren’t sure, even the day of, what the color of the teeth was going to be. Joss hadn’t given a final say on that. So Optic Nerve built both silver and rotten, old, disgusting teeth. So right after they get both Doug and I in makeup, they pop one of those sets in me and the other one of those sets in Doug, and then they say, “Hey, Joss, which one do you prefer?” And he came over to us and he looked for less than five seconds. “Yeah, the silver.” And just walked away. He gave his approval that quick. It was pretty amazing. But in television, you have to. Television is happening very quickly. It’s like a locomotive. It doesn’t stop for anything [laughs]. 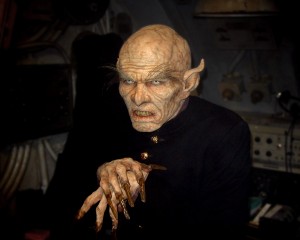 AX: Now, did you have any sense when you were playing a Gentleman that you were doing something that was going to turn out to be iconic, or did that come later, once people were like, “Oh, my God, that character scared me so much”? 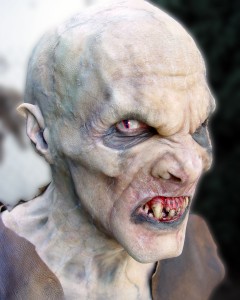 TOY: [laughs] Yeah. I still have people coming up to me and going, “Thank you very much. You’re in all my childhood nightmares.” It’s interesting. I mean, we knew it was a special episode. There was no doubt about that. But I don’t think we fully, fully understood it until … The very first day of shooting, the very first scene that Doug and I shot is where we float in and our Footmen – that’s what they called them, the Footmen, those crazy guys with the straitjackets – are holding down the young college man, and we’re about to cut his heart out. I think that’s the first scene that Doug and I shot, and we got a sense that this might be something special when they yelled, “Cut,” and one of the crew members went, “You know, I can’t believe the dialogue you guys are having, and you haven’t said a word.” I think we got a little bit of a feel of, “Okay, this is going to be unusual.” But when you’re in the middle of shooting, you don’t always fully know. Certainly, we knew it was a special episode because Joss is writing and directing it. That’s always special, because he only wrote and directed a couple episodes per season. But there was something unusual about it, and certainly because, let’s face it, Joss was known for his pithy dialogue and now suddenly it’s this silent episode. So …