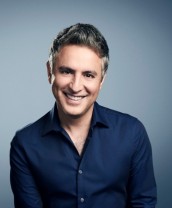 The author and host discusses his series on little-known religions 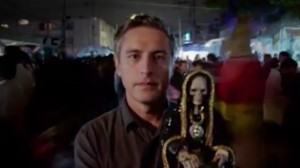 In CNN’s new Sunday-night documentary series BELIEVER WITH REZA ASLAN, the host of the title explores little-known religious groups around the world. Aslan, a prolific author, scholar and television producer, has written three nonfiction books about religion, a subject close to his heart.

ASSIGNMENT X: You’ve made six episodes of BELIEVER WITH REZA ASLAN. Is each episode on a different topic?

ASLAN: Yes. And then our last episode is the ultra-Orthodox [Jews] in Israel.

AX: So no off-the-beaten-path Christians?

ASLAN: Not for this first season [laughs]. But for the Haiti episode, we do really delve deeply into the clash between the indigenous Voodoo community and the evangelical missionaries, who have made it their goal to eradicate Voodoo from Haiti.

AX: Do you have any concerns that, given the current climate, this might make things worse for non-mainstream religions in countries where this is airing?

ASLAN: On the contrary. I think that this is exactly what we need, because the premise of the show [is], it’s not an informational show, it’s an experiential show. I’m not the kind of guy who’s just going to be walking around, pointing at things and saying, “Isn’t that interesting?” I immerse myself in these communities, I become one with them, I do what they do, I go through the experiences that they go through. The purpose of it is to take something that looks foreign and scary and exotic and make it not just relatable, but to make it something that you yourself connect to.

I think the average viewer is going to watch one of these episodes, they’re probably going to begin the episode by thinking that what they’re watching is crazy, it’s the craziest thing they’ve ever seen, and they’ll probably end the episode by thinking to themselves, “That’s not that crazy, actually. I sort of feel and believe the same thing. I might call it by a different name, but I understand where they’re coming from.” That’s what we need now more than ever.

AX: So these are people who are extremely religious, but aren’t “extreme” in terms of advocating violence against other humans?

AX: Would “lesser-known and devout” be more accurate?

ASLAN: Not devout. But certainly lesser-known. From the very beginning, when I wanted to do this show, I didn’t want to explore religions that people were completely familiar with, I wanted to explore religions that they may have heard about, they may have had some kind of preconceptions about, but maybe didn’t know. I think that Voodoo is a perfect example. Voodoo is an ancient religion that traces its roots to a thousand years before Christ. I think that most people think Voodoo is some kind of weird, demonic, Satanist thing where you get possessed by demons and you drink animal blood, and would be very surprised to find out what Voodoo truly is about.

AX: Is the Voodoo you explore in BELIEVERS Santeria, or is this distinct from Santeria?

ASLAN: It is distinct from Santeria, but Voodoo and Santeria have an Afro-Cuban core to them that makes them somewhat similar, but quite different in the way that they are expressed.

AX: But they have some of the same deities …

AX: And it’s a religion that most people outside of it have misconceptions about …

ASLAN: Scientology is another great example. That is probably the most misunderstood religious tradition, certainly in the United States. I think everybody here has an opinion on Scientology, but almost no one can tell you what Scientologists actually believe, like what does it really mean to be a Scientologist on a day-in and day-out basis? And you’re going to see that for the very first time. And you’ll probably think to yourself, “Huh, not as weird as I thought.”

AX: How did you find your ways into each of these different religions? That is, how did you get people to talk with you?

ASLAN: It’s not the easiest thing in the world to go to a religious community, particularly a religious community that is often demonized or misunderstood, and to say, “Hi, can me and my camera crew show up for a couple of weeks and hang out with you?” It’s not easy. I will say that I had the advantage that I have a reputation as a scholar, and as someone who values belief, as someone who is not interested in judging or making fun of people for the things that they believe, even if I don’t myself understand them or accept them. And I think that for the most part, we didn’t have that much difficulty in convincing these religious communities to allow us to join them. Sometimes it is quite remarkable.

The ultra-Orthodox [Jewish] community in Israel is an extremely closed off religious community. They don’t allow any outsiders into their circle, let alone an Iranian Muslim guy [like Aslan]. And it took a while, but I think it’s very clear when you talk to me that I am not there to make fun of you, I’m not there to judge you, I’m there simply to experience what you experience, and to try to elucidate that experience to an audience in an interesting and entertaining way.

AX: Is there a common thread in what you personally wanted to know in this experience?

ASLAN: I’ve been studying the religions of the world for I guess two decades now, and I learned very early on that, while people use different languages, different metaphors, different symbols to express spirituality, the sentiment that they are expressing is universal and familiar. It’s like learning a foreign language, or like having a translator. If I sit here and I’m having a conversation with someone who’s speaking a foreign language, there’s no connection. I don’t understand anything that they’re saying at all. And if I suddenly have a translator, now not only do I understand them, but I can connect with them, I can have a relationship with them. Religion is a language, and once you crack the language, once you crack the code, once you understand what this ritual means, what the symbol means, what the metaphor stands for, it’s impossible not to recognize how universal the sentiment that is being expressed is, how you yourself, whether you are a believer or not, feel very much the same way, think very much the same way.

AX: And is a common theme among the religions, “What am I expected to do in this life?”

ASLAN: Yes, but I think the most common thing among believers is a desire to connect to something beyond just this. Truly, I think the difference between an atheist and a believer is not morals – actually, poll after poll, study after study, show that atheists have the highest morals and ethical values of any community, regardless of what your faith is. I think the difference is that one believes that the material world is all there is, and so whatever your experience is, that experience happens at this level. And I think believers believe that there is something beyond this level. What is that? Maybe it’s God, maybe it’s nirvana, maybe it’s enlightenment, whatever it is. They have different words for it, but what binds them all together is this notion that there’s something beyond. And you can connect to that thing.

AX: Does that include people who believe in extraterrestrial life?

ASLAN: I think for a lot of those people, that’s exactly what they are searching for. When you look at so-called alien conspiracy theorists, it is a means of simply saying, “There’s something else and I want to connect with it.” Absolutely.

AX: Now, did CNN come to you about BELIEVER WITH REZA ASLAN?

ASLAN: No, no. I wanted to do this show for awhile, and I [sought out] a production company that I felt could make a show like this happen, and once I partnered with that production company, Whalerock, then we went and started shopping it around, and we shopped it to a lot of networks, but from Day One, this was the only network I wanted the show to be in. So we went through the process of telling other people about it, but I always knew that this was where it was going to land.

AX: Do you feel that it helps BELIEVER WITH REZA ASLAN that it’s on a hard news network like CNN?

ASLAN: It does, because nobody wants to be sensationalist. Nobody wants us to go out there and do something that is maudlin. We have the ability to be entertaining and informational, but also to deal with current events, what’s happening in the world. And it’s sort of the best of all worlds with CNN.

ASLAN: Yes. My next book comes out in October, so I’m excited about that. It’s called GOD [laughs]. And it’s basically a history of what we call “God.” How did the idea arrive and how did it develop in human history? It’s really about how the very notion, the very concept of God arose in human history, in human evolution, and how that idea has evolved over the course of human history through various religious traditions. It’s less about a history of religion than it is about the way in which this has evolved.

AX: And what would you most like people to know about BELIEVER WITH REZA ASLAN?

ASLAN: Besides when it’s on, Sundays at 10 PM? That it’s unlike anything they’ve ever seen on TV, no question about it. It’s educational, it’s entertaining, it’s funny, it’s sad, and you will walk away knowing things that you never thought that you knew.

This interview was conducted during CNN’s portion of the Winter 2017 Television Critics Association (TCA) press tour at Pasadena’s Langham-Huntington Hotel.