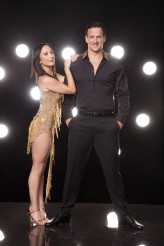 DWTS had a great start but not without hitches, including people storming the stage 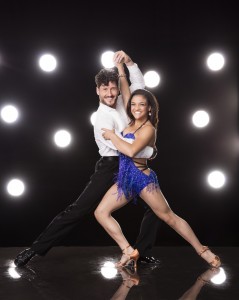 DANCING WITH THE STARS: Season 23 started out with a bang! A big cast, a lot of returning favorite pros, plenty of glitter and a decorated Olympian who screwed up. And I don’t just mean on the dance floor. This is a dance show, not a trial. Yes, Ryan Lochte acted irresponsible and did something dumb in Rio. Is he being punished, yes! Now, please, please, please can we move on already?! I find it incredibly hypocritical of those judging him so harshly, as if they have never used poor judgement in a fit of excitement or under the influence of alcohol. So get off your high horses and let us ALL look forward, not back. Don’t judge lest thee be judged.

Now, back to what this show is about – entertainment, and yes there was plenty of that too. Olympian Laurie Hernandez and her partner Val Chmerkovskiy tied with race car driver James Hinchcliffe and his partner Sharna Burgess for first in an impressive show of talent. Sadly, Governor Rick Perry had just about as much luck on the dance floor as he did campaigning for president. Not only will he not be president but he will not be taking home the mirror ball trophy either.

Marilu Henner (Actress) and her partner Derek Hough
A little jittery. Inaba said she was in control. Hough called her sharp. Len Goodman said she was fabulous in her Jive. Tonioli said not to tighten up.
Scores: Inaba – 7, Tonioli – 7, Hough – 6, Goodman – 7, Harland – 7

Vanilla Ice (TV personality) and his partner Witney Carson
So entertaining! Goodman called his Cha Cha terrific. Hough said there was not a lot of Cha Cha. Tonioli said it was a great performance.
Scores: Inaba – 7, Tonioli – 7, Hough – 6, Goodman – 5, Harland – 6

James Hinchcliffe (Race Car driver) and his partner Sharna Burgess
Natural Flair. Inaba said she is looking forward to his next dance. Goodman called him a knock out. Hough said he was very graceful in his Foxtrot. Tonioli called it first class.
Scores: Inaba – 8, Tonioli – 8, Hough – 7, Goodman – 8, Harland – 8

Terra Jole (Reality star) and her partner Sasha Farber
She did well! Inaba called her a huge star. Goodman said she was big in heart. Hough called her a firecracker.
Scores: Inaba – 7, Tonioli – 6, Hough – 6, Goodman – 6, Harland – 7

Jake T. Austin (Actor) and his partner Jenna Johnson
Stiff. Inaba called him charismatic. Hough said to work on his feet. Tonioli said to focus on his bottom half while doing the Jive.
Scores: Inaba – 5, Tonioli – 6, Hough – 5,Goodman – 6, Harland – 6

Rick Perry (Politician) and his partner Emma Slater
Well, he tried. Goodman said his Cha Cha was too pedestrian. Hough said he was full out on the dance floor. Tonioli called him brash.
Scores: Inaba – 5, Tonioli – 5, Hough – 5, Goodman – 5, Harland – 5