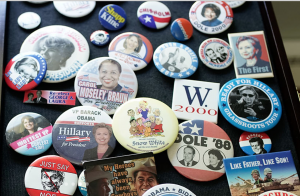 Carlos Watson hosts and is one of the producers of the new PBS series THE CONTENDERS: 16 FOR ’16. In the run-up to the 2016 U.S. Presidential elections, the news show, Tuesdays at 8 PM, spotlights sixteen former U.S. presidential candidates, two per episode, via interviews with the candidates themselves and the influential people around them.

At a Q&A panel for THE CONTENDERS: 16 FOR ’16, Watson says, “I’ll tell you know, having talked to almost a hundred people, from candidates to campaign managers to historians, analysts, family members, I found most people, actually, to be pretty thoughtful about things they could have changed and could have been different. And I think in those moments, we discovered some real interesting pieces. Talking to Ralph Nader and hearing his thoughts about the importance of the debates and what that might have meant for him and others as a third-party candidate. And as we look at Gary Johnson today, could he get on the debate stage? And if so, what could that end up meaning? That was incredibly interesting. Hearing people like Karen Hughes and Karl Rove talk about W. [George W. Bush] and why they thought that, ultimately, in that family, W., who ten, twenty years earlier, didn’t immediately look like the likely person in that family to become the next president, did win. Really interesting, heartfelt things that they said about his authenticity, which I thought was interesting. Very interesting dinner with President Clinton who, as Susan said, is the ultimate political junkie, and hearing him go through about a half-century worth of contests. [He is] very good at analyzing what could happen and what couldn’t happen.

“So I’m hopeful that this series will not only draw people in, because you have such a rich mix of characters, from Shirley Chisholm to John McCain, from Pat Buchanan to President Obama, but also because … we’re not just talking about one campaign, we’re talking about sixteen. And you’re hearing it from the candidates themselves, as well as the campaign managers and, maybe the most insightful people in some cases in terms of what they could have done, family members.”

Away from the panel, Watson answers a few more questions.

ASSIGNMENT X: How did you decide on which candidates to cover?

CARLOS WATSON: It’s the sixteen most important presidential campaigns in recent memory, and we’re going to cover them from Goldwater to Obama and back.

AX: PBS does a lot of political coverage. Do the PBS news programs confer with each other to make sure there isn’t a lot of overlap in the coverage?

WATSON: I run an independent group called OZY Media, which is working with PBS on this, but yes. PBS is being super-thoughtful about what FRONTLINE is doing and what the NEWS HOUR is doing, and what AMERICAN EXPERIENCE and others are doing as well.

AX: What would you most like people to know about THE CONTENDERS: 16 FOR ‘16?

WATSON: That part of the way we’re going to do it is not only talk about interesting things that are happening in the moment, but also giving historical context. So we think you’re more likely to understand Trump’s possibilities and his challenges the more you understand about people like Ross Perot. And we think part of the challenge around the discussion of immigration and race and other things is informed in part by what John McCain went through in 2000 and 2008. So we think history’s context is important and that’s going to be part of the coverage.