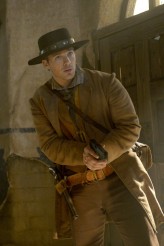 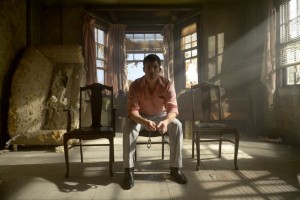 Shawn Ryan created the multi-award-winning police drama THE SHIELD, which ran for seven seasons on FX. He followed this up with a number of other series set in the worlds of law enforcement and the military.

Now Ryan has teamed up with Eric Kripke (who created SUPERNATURAL) for NBC’s TIMELESS, Mondays at 10 PM. In TIMELESS, historian Lucy Preston (Abigail Spencer), soldier Wyatt Logan (Matt Lanter) and scientist Rufus Carlin (Malcolm Barrett) travel through time in a sphere, trying to prevent a secret conspiracy who want to control today’s world by altering the past. The trio’s adventures take them to a wide variety of historical events.

Ryan attends NBC’s Q&A session for TIMELESS. At the panel and in a one-on-one follow-up discussion, he talks about delving into the science-fiction fantasy genre.

First of all, did either Ryan or Kripke come to the other with the project? “We co-created it together, we broke it together,” Ryan says. “Eric had the initial idea, but he didn’t go into a lot of detail. He approached me, and I said, ‘Well, let’s spend a few days in a room together. We’ll, a), see if there’s a story there, and b), see if we like working with each other.’ And we decided there was a story there, and we decided we did like working together, and so then we pitched it together and wrote the script together and did everything together.”

In the long-ago days, before he created THE SHIELD, Ryan spent a spell as a staff writer on the vampire series ANGEL, created by Joss Whedon and David Greenwalt. From this came a rumor that Ryan didn’t like genre conventions. Ryan would like to dispel that rumor. “I wouldn’t say I didn’t like them. I would say I struggled with them a little bit,” he laughs. “It’s not that I never liked them – I love Joss’ work, I love the shows, but coming off of three years of NASH BRIDGES, it was a change for me to start thinking in terms of metaphor, to start thinking in terms of these stories with vampires and demons and everything. I started to get used to it near the end, but then THE SHIELD got picked up, so I moved on to that. Certainly, Eric is the sort of genre master, and I defer to him oftentimes on the genre questions. But I’m learning. I love watching this kind of stuff, and now I’m enjoying making it for the first time.”

Does TIMELESS lend itself to metaphor? “You can absolutely do metaphor. You can tell stories that would be harder to tell in present day. Look at Rufus in the jail cell. We are able to comment on the idea of the history between police and African-Americans in a way that would have been a little harder to tell in present day that we are able to tell there, so that’s the metaphor.”

Asked how arced and how serialized TIMELESS is, Ryan replies, “I would say that it’s going to be about eighty percent story of the week, and [with] each story, that we’re going to go back to an iconic period of time. We’re going to send them on an epic adventure in TIMELESS. And yes, at the edges, at the beginning of episodes to the end of episodes, we’re going to have some ongoing stuff. But it’s important to Eric and I, and I know to NBC as well, that this not be the kind of show that falls down some serialized rabbit hole and sort of loses itself and turns on itself. This show is much more, I think, like BACK TO THE FUTURE and QUANTUM LEAP than it is like 12 MONKEYS in that way. Time travel is something that we use as a device to tell this pretty epic historical show. And yes, we’re going to have important personal things. Lucy’s character undergoes a really serious, epic loss at the end of the pilot, and we’re going to deal with that, but in ways that we’re going to attach at the beginning and end of episodes and hopefully aren’t going to get in the way of people dropping in to enjoy the episode when they watch.”

Given that even small changes to the past have already produced big alterations to the characters’ present, have they given up on the impulse to save good people who died the first time around? Ryan says this issue “is something we spent a lot of time talking about, and something that Lucy’s character has a different opinion than Wyatt’s, and a different opinion than Rufus’. And it’s a debate. There’s one theory of thought that says if the bad guy is going to go back in time and use his time machine to do bad, what’s to stop us from going back and doing what we think is good? It’s a struggle for these characters, and it’s something that weighs on them. But Lucy has the proof in her own life that even little changes can result in big tragedies. Would saving Abraham Lincoln be a good thing, or who knows what may come out? You’re rolling the dice, apparently. She’s something that doesn’t like to roll the dice. Wyatt is someone that does like to roll the dice. So the question is one that we’ve had a number of conversations about in the writers’ room, and each episode is going to be different and sort of based on what our characters are going through that week.”