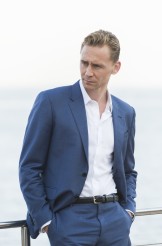 THE NIGHT MANAGER: Tom Hiddleston gets his spy on – interview 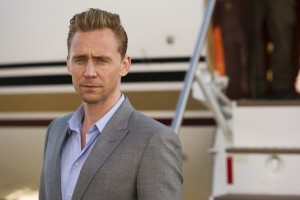 If Tom Hiddleston’s acting work on its own were somehow not enough to make him rate highly, consider this.

Hiddleston shot to fame playing the villainous but witty Loki in the THOR and AVENGERS movies. He’s starred as a depressed vampire in ONLY LOVERS LEFT ALIVE, as an impoverished nobleman with a devastating secret in CRIMSON PEAK, was seen earlier this year as country singer Hank Williams in the biopic I SAW THE LIGHT (due out soon on home video) and is currently in the big screen in the dystopian British thriller HIGH-RISE.

Immediately following AMC’s Q&A panel regarding THE NIGHT MANAGER for the Television Critics Association, Hiddleston is standing in an open area of the Pasadena Huntington Ritz-Carlton Hotel. Eye contact is made. A reporter smiles; Hiddleston smiles back. The query, “Do you have a moment, sir?” is met by a cordial, “Of course.” Hiddleston proceeds to engage in an impromptu interview with four reporters, all of whom are extremely appreciative.

TOM HIDDLESTON: I read Episode One, and knew of the book, and obviously, I knew of Le Carre. Episode One came to me completely finished and pristine, and Jonathan Pine was just the most extraordinary prospect, captivating, courageous, vulnerable. I just wanted to play him. It was a very immediate connection.

AX: Any specific ones?

HIDDLESTON: Gosh. I mean, I’m a huge Bond fan, to be completely honest, if that counts as a spy movie. What else is quite good? There’s another one – THE IPCRESS FILE, with Michael Caine [from 1965] It was great.

HIDDLESTON: We shot it actually at the end of 2014. It’s extraordinary.

AX: What kind of research did you do? It seems like playing a real person could be a little daunting …

HIDDLESTON: Yeah. I just immersed myself in the facts of his life, in the music, in the culture of the South, the accent. In a way, the hardest thing was singing and playing like him. But it was a joy. I’ve always been a fan of music, and to make a film about music was incredible.

AX: Did you get to speak with any of Hank Williams’ family?

HIDDLESTON: Yes. I’ve spoken to Holly, his granddaughter, who’s seen the film, and she wrote me one of those emails I’ll keep forever.

AX: Are you a country music fan?

HIDDLESTON: I am now.

AX: Regarding THE NIGHT MANAGER, he’s the first character you’ve played in awhile who could be described as a reasonably good guy. Were you looking to play someone who didn’t have a horrendously dark secret, or substance abuse issues, or an outright Asgardian conquest complex?

HIDDLESTON: It’s really fulfilling to play a hero, to play someone who makes brave decisions for the right reasons.

AX: And you have THOR: RAGNAROK and KONG: SKULL ISLAND coming up. How are those going?

HIDDLESTON: Great. On SKULL ISLAND, we just [finished filming in] Hawaii [and continued on] to Australia and Viet Nam.

AX: Do you have a preference for playing good guys or bad guys?