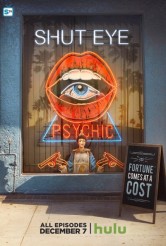 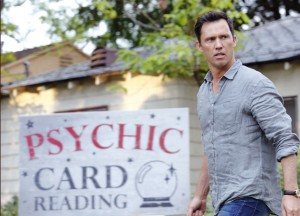 In SHUT EYE, the new Hulu series created by Leslie Bohem, Jeffrey Donovan stars as Charlie Haverford. Charlie and his wife Linda (KaDee Strickland) are con artists, fake storefront psychics who work within the San Fernando Valley empire of a powerful Rom family. Then a couple of things happen. Charlie earns the gratitude of an outside mobster (David Zayas) – and finds that he’s now genuinely psychic.

Creator/executive producer Bohem (DANTE’S PEAK, the TAKEN TV miniseries, EXTANT) spills on how he did it.

ASSIGNMENT X: How long have you been working on this altogether?

AX: Did you have a particular interaction with a con artist or a psychic that sparked the idea for you?

BOHEM: No. The thing that fascinates me the most was where I went from “fake psychic, real visions” – on a pure entertainment level, I wanted to do BREAKING GOOD. I wanted to see if I could tell a story that was as wickedly funny about a compromised person eventually trying to be good – if we’re lucky and we get many years, this will be a long, convoluted journey to sainthood for Charlie. You get visions, you get visions for a reason. And with that power comes responsibility, all that sort of thing. I’ve always been a sucker for any great con story, but when I started to read these things, it was just jaw-dropping. You could not believe how quickly people gave up their fortunes.

AX: Well, there was recently the case with that man in New York who spent hundreds of thousands of dollars on a psychic who claimed she’d be able to find his soul mate …

BOHEM: Unbelievable. That’s an unbelievable story. There are several others like that. That one happened after I’d started writing it, and all of my friends just kept sending me that New York Times article. “Have you seen this?” “Yes.” [laughs] “Did you know this happened?” “Yes!”

AX: Is Charlie going to rub off on Linda at all, or is Linda very much on her own path?

BOHEM: I think their paths will differ. In my game plan, their paths diverge greatly, as he slowly, slowly, slowly tries to do the right thing. She’s Lady Macbeth, and where we depart from MACBETH is that Charlie won’t eventually embrace killing everything in sight.

AX: We see Linda start an affair with a female hypnotist. Is Linda naturally bisexual, is she actually lesbian but married, or did her interest in the other woman start with the hypnotic suggestion.

BOHEM: It’s funny. Several people have asked if it was a hypnotic suggestion. No. This is going to sound far afield, but as a writer, when I am stuck with how characters should behave, I always ask myself how Larry McMurtry would write it. I think she just occasionally feels an itch she needs to scratch. And it may be a woman, it may be a man. She doesn’t have a particular bent, as it were. She just has needs that she doesn’t understand that she needs to fulfill. I mean, the relationship [between Charlie and Linda] is complicated, because – this is an argument I’ve had several times – if this were a mob show, and she were a guy, you would be comfortable with the idea that the wife in that story forgives the husband if he spends time with prostitutes, as long as he doesn’t fall in love. But that’s a common trope of that world.

AX: If this were a mob story, would Linda be played by Joe Pesci?

BOHEM: Perhaps. So when I turn it on its head, it really had nothing to do with who she slept with. In earlier incarnations of the script, there was another guy. Then Gina [played by Emmanuelle Chriqui] was in the script, and I thought it felt right. And the trope, if you will, turned on its head is that Charlie is completely okay with that, as long as she doesn’t fall in love with somebody, or bring it into their house. It’s just, this is something she needs to do – it’s not messing up our marriage. But the danger with Gina is that Linda’s going to fall for her, and that does threaten their relationship.

AX: How did you decide on using the San Fernando Valley for the setting?

BOHEM: It’s set in the parts of Los Angeles that we don’t usually see – Van Nuys. In L.A., I grew up here, I love all the weird parts of L.A. I drive to weird places. So you know what they are. But the thing we managed to do was do a lot of exteriors here. It was meant to be drab Valley.

AX: Is there’s something you’d like to be asked about SHUT EYE that you haven’t been asked today?

BOHEM: Nobody asked what a “shut eye” was.

BOHEM: I’m repeating Orson Welles – a shut eye is a magician who starts to believe that he’s actually magic. I was surprised no one asked.