The series creator talks the power of rock music 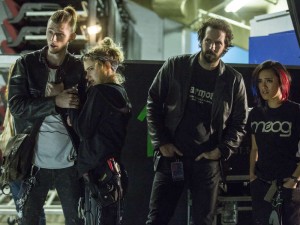 Before Cameron Crowe became a filmmaker – writer/director of SAY ANYTHING and JERRY MAGUIRE, among many feature credits – he started out as a very young rock ‘n’ roll journalist. Crowe’s experiences covering rock bands formed the loose basis for his film ALMOST FAMOUS, which earned him a Best Original Screenplay Oscar.

Now Crowe has returned to the rock world for television with his Showtime Network series ROADIES. Based on Crowe’s observations, ROADIES is about the lives, loves and musical passions of the crew that gets the (fictional) folk/rock band Staton House from one huge gig to the next. Luke Wilson and Carla Gugino head up the cast.

AX: Most of the characters in ROADIES don’t actually make music themselves, but they care about it deeply …

CAMERON CROWE: Luke [Wilson] – we’ll talk about music, and an hour and a half will go by. And there’s just a certain language and a certain look in your eye when you’re talking about something that’s fun that you’re passionate about. And I want the show to be that, like the place you can go to have some of these conversations. So that’s the way it’s going to go. Nobody’s leaning on me for one thing or the other.

AX: If television had been different back then, would you have considered doing ALMOST FAMOUS as a series?

CROWE: No. ALMOST FAMOUS really kind of needed to be that one story, which is getting that one interview that was so hard to get. And that was the thing that was defining about that time for me, and some of the bands took me in, and some of them didn’t, but the ones that took me in created an adventure that lives and lives and lives. And so I’m like, “Let’s tell one story, and that’s the story of 1973.”

AX: What has changed about the musical tour business since your own days on the road with bands?

CROWE: Well, it’s a little more mechanized, it’s a little bigger, and smaller. The middle has disappeared, like in so many other ways. Big, big, big flourishes, and small, small, small flourishes. And I love the idea that bands do living room concerts now. They tour living rooms. And guess what? They’re great shows. So I like that, I like expressing that in the show, and also, a band like the Staton House Band is kind of struggling to find out what the next phase is. So we’ll find out through the show, like where do you fit now? You’ve been together for ten-plus years, where are you going to take your audience now to make yourself compelling? That’s one issue to get into.

AX: As you get further away from your experiences on the road with those bands, what do those stories and those memories mean to you as time has gone by?

CROWE: Well, I kept notes on everything. And I’m actually doing a collection book now. It’s not so bizarre how present the memories are, and [there are] not a lot changes. I see a lot of people in the notes from the interviews that we’ve done struggling to find a way to success with integrity, dealing with failure, turning failure into lesson. It’s all stories that I’ve kept writing about, and I still have friends that are in bands, and I go out and do shows and check out stuff. So I don’t know if that answers the question, but I’ve stayed researching pretty consistently. And it’s present to me. It’s very present.

AX: There are myths of the tours, like bands who insist on a particular color of M&Ms, and then eventually it comes out that there’s a really good reason for that. Are there other stories like that you can explore in ROADIES?

CROWE: Yes, definitely. There are all kinds of stories, and real specific ones, too, about things that happen with crews, or one member deviates from the personality traits he’s had up until now. It’s a never-ending fresh source, to just go to real life. Because when you make it up, it’s never as good.

AX: Things like the little riders they put in the contracts about safety …?

CROWE: Definitely. It’s very much parsed legally, in so many ways. But you get things like, if a person dies in the arena, that’s a different lawsuit than if they die outside the arena. So you have somebody whose job it is to figure out, if someone’s dying, where should they die, and how can I help them without hurting the organization? So you have real definitive battles of humanity, along with, how can we get the perfect French cheesecake? This is an American cheesecake. And they want a French cheesecake. What is a French cheesecake? We also have Colson Baker [aka Machine Gun Kelly] from the very vivid world of hip-hop touring, which he’s still doing constantly, and that’s its own thing. I just like that the show gets to be kind of a radio station where we play a lot of music and show people being affected by it, not just using music to make a scene be sadder or happier, but [show] how it’s going to change their lives.

AX: As a creative person, is it challenging to write about the tour crew, many of whom are fascinated by the creative sphere, yet don’t have creative ambitions themselves?

CROWE: No, because the ambition is to make friends and family and celebrate the things that you love. I always felt like the whole sex, drugs and rock ‘n’ roll stereotype of rock stardom was so dishonest in a way, because nobody ever picked up a guitar to get drugs. And they couldn’t play very long, because that’s not going to help them write a song. That stuff can happen later, but what happens first is, somebody falls in love with a song or a piece of music, and it changes your life. And that’s what this whole crew has in common with the people they work for, and the actors have in common, too. So I like writing about that.