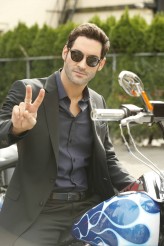 LUCIFER: Joe Henderson has a devil of a good time on the new Fox series – interview 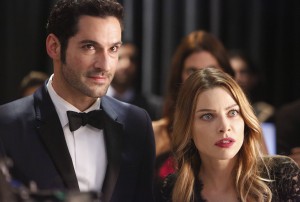 In Fox Network’s new series LUCIFER, Mondays at 9 PM, the Devil, played by Tom Ellis, has left Hell, moved to Los Angeles and opened a nightclub. When LAPD detective Chloe Decker (Lauren German) piques his interest, Lucifer decides he’s going to help her solve crimes. Decker objects, not because Lucifer is evil – and indeed, he seems less evil than misunderstood – but because she thinks he’s a crazy if unusually perceptive civilian.

LUCIFER is based on a D.C. Comics series by Mike Carey that is an offshoot of Neil Gaiman’s venerated SANDMAN graphic novels. The show was adapted for television by Tom Kapinos.

Executive Joe Henderson (WHITE COLLAR, ALMOST HUMAN, GRACELAND) serves as LUCIFER’s show runner. He talks about how the series shows the Prince of Darkness in a new light.

JOE HENDERSON: It was already pretty inherent in the pilot, which is him going on vacation. But to me, as I started processing the show, it was taking that a step further. What is it like when the Devil decides to create his own rules, or try to understand himself outside of Dad [God]? Because that’s what it really was. Sure, it was a world of centaurs and all sorts of awesomely crazy stuff, but really it was, “How do I get away from Dad and define myself without him?”

AX: How many siblings does Lucifer have? We see one in the pilot, and presumably there are other angels and demons around.

HENDERSON: That’s a good question. That’s something that is in a lot of conversation in our [writers’] room, and we haven’t nailed it quite down yet, but we have a number of ideas that will be played with.

AX: Apart from God, are there entities of greater or equal power to Lucifer?

HENDERSON: There are. The goal of the show is to start off grounded, with touches of fantastic. And as we go, we’re going to start peeling into the fantastic a little more, and diving in and out, and we will definitely be playing with other characters of an equal strength in a very formidable way.

AX: Do you remember your initial reaction to the LUCIFER source material?

HENDERSON: Yes, because I borrowed my older brother’s copy of SANDMAN, and I wasn’t supposed to be reading it, because it’s a “mature” comic, and I fell in love. And so I stole his issues until he found out and got mad at me and then just started lending them to me. So it was very formative to me, very early on. Neil Gaiman’s writing – I’ve read all of his books. I’m a fan. So when I got an email from Neil Gaiman, that was the day. That was cool.

AX: Has Neil Gaiman weighed in on the TV series at all?

HENDERSON: He has. I was just saying earlier, he’s been very supportive, he’s retweeted interviews, he’s Tweeted support, he emailed with me and was very kind and generous. It’s got to be very tough when you create a baby, and you put it out into the world, and he has that very healthy perspective, inasmuch as, you make a toy for a company, in this case, D.C., but it’s not yours. You don’t own it. You put it in the play box, and then someone else comes and picks it up. In that case, it was Mike Carey. He played with it, he put it back in the hidden toy box, now I’m picking it up. My goal is to not break the toy.

AX: What do you see as central to the series’ concept of Lucifer as a character?

HENDERSON: He’s not evil. He’s just a fallen son. And what I loved in Gaiman’s run, when Morpheus comes back and he’s ready for the war with Lucifer, Lucifer is like, “Hey, you know what? I’m done. I’m going to walk away.” And it was so unexpected, and so ballsy, and so bizarre, and to me, that defined the character so well. He’s not a bad guy, he’s not evil – he’s like us, inasmuch as that he just wants. He has desire. And what we’ve really done is embrace that and run towards that as like, he draws the desires out of everyone else. And what I love about that is, it’s not a bad thing. It’s good to embrace your desires. Because sometimes burying them deep down just makes you unhappy. And why do we do that to ourselves? Why does humanity do it to itself? And that’s one of the questions that he’s exploring.

AX: Are the Analysts, from the comics, off-limits, or are variations on the Analysts possible …?

HENDERSON: We haven’t even asked, because we wanted to really establish Lucifer as is. It’s definitely, as we start moving forward, something that we can start having conversations about. I don’t know. We were just so focused on letting Lucifer stand on his own feet – believe me, it’s tempting to try, but we made a very conscious decision, this is Lucifer’s story, let’s not muddy the waters yet. But if D.C.’s willing, how would you not want to play with those? But we don’t know.

AX: There are at least two shows on air right now that seem to have various points in common with LUCIFER. SUPERNATURAL bounces between Heaven and Hell a lot, and has Lucifer as an actual character; CASTLE is about a very famous man, albeit not a supernatural one, who becomes fascinated with a female police detective and finagles his way into working cases with her. Are you guys watching those shows to avoid duplication, or …?

HENDERSON: We have some writers watching shows that overlap, yes. There is someone who is watching SUPERNATURAL for us, because it’s a great show, and someone who’s watching CASTLE for the same reasons. So yes, we are trying to make sure we don’t overlap too much. Because everyone’s going to tell similar stories. How do you tell them with a very slightly different turn? And Lucifer is a character that allows us to do that.

HENDERSON: What drew me to it is, it is a comedy/drama/horror/procedural. Basically, everything that I love most. The reason I took the job is because if I took a list of the things that I love and put it in a stew, it’s this show. So for me, it’s just a happy day every day I get to write it.

This interview was conducted during Fox Network’s portion of the most recent Television Critics Association press tour in Pasadena.