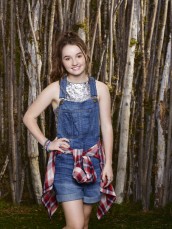 The actress talks about her character on the ABC comedy, plus the end of JUSTIFIED 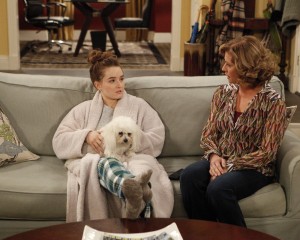 In the ABC half-hour comedy LAST MAN STANDING, now running on Friday nights in its fifth season, Tim Allen stars as Mike Baxter. Out in the world, Mike is a macho writer and sporting goods store owner, but his home life is filled with his wife Vanessa (Nancy Travis) and their three daughters.

On the LAST MAN STANDING set for the Baxter living room, Dever talks about the comedy show and more.

AX: How do you feel Eve has evolved by Year Five of LAST MAN STANDING?

KAITLYN DEVER: I think she’s definitely evolved in the way that she is. She grew up on the show. We got to watch her be thirteen years old and by the end of the fourth season, she is almost going into her senior year, and I think there’s just a lot there that already evolves. She was very tomboyish and very into sports, but now I think in the fifth season, we’ll definitely see her trying to figure out who she is, who she wants to be in life, and I think she’ll deal with some conflicts on the way.

AX: Eve is interested in going to West Point. Have you and the writers discussed, if the show goes another year and she graduates, what happens if she does get into West Point? Will you go from regular to recurring, is the West Point Academy going to be just down the road from the house, or how you going to deal with that?

DEVER: We haven’t really touched on that yet, but I think the West Point thing is definitely a [subject] that we’re going to be talking about more and more, because we know that she is headed in that direction of where she is going when she’s done with high school, and West Point has been part of the discussion, but I think that everything’s changing, and she may not get into West Point and that’s sort of a thing she’ll have to talk about with her parents. It will probably be a good thing to talk about, setting herself up for failure, if that is to happen, because you never know, when you’re applying to colleges, you never know if you’re going to get in or not, and Eve is used to winning. I think that will be a good storyline for that.

AX: Do you enjoy going out and doing dramas and coming back to comedy?

AX: How do you feel about the way JUSTIFIED wrapped up? Your character Loretta was pretty integral to the final season.

DEVER: Well, my first initial thing about it is to say I’m very sad, but also, those writers are so great on that show, and I miss them so much. I’m going to miss that show a lot. It was just very satisfying playing that role. It was such a great opportunity for me as a young actress. There are not a lot of roles like that for people my age and getting to play that, as one of my first big-time things, it was crazy. It was amazing.

It was a very sad ending, but I think they ended it really well and the writers are so amazing. I think they wrapped up everyone’s storylines good. I think the way they did it was nice and the way that they did the [flash-forwards] at the end was a good way to go about it, but when I look over the whole thing and take a step back, I just think how I spent most of my teenage years on that show as well and it’s sad to think that it’s over. I can’t imagine that being for this show, but I’m not even thinking that right now.

AX: What do you think Eve and Loretta would think of each other?

AX: Who makes you laugh the most on this set?

DEVER: Either Molly [Ephraim, who plays Eve’s sister Mandy] or Tim. Me and Tim, I feel like we’re always laughing at each other. I feel like it’s always when we mess up. We can tell when we’re just about to mess up, but we haven’t messed up our line yet, and he just makes me laugh.

AX: It seems like there are some political disagreements between Tim Allen and some of the writer/producers. As some of the humor on LAST MAN STANDING is topical/political, are there a lot of political discussions, and do you participate in those?

DEVER: There’s a lot. We always call it on this show “when the door slams shut.” It’s basically our behind-the-scenes of what happens before the live tapings. There are a lot of political discussions. I honestly don’t have any opinion on politics yet. I just graduated high school. So I listen to it, but it’s all going past my head. I listen to them talk about it, but I know nothing about it [laughs].

AX: Given that you started working on LAST MAN STANDING when you were fairly young, what year did you become aware that the comedy sometimes deals with political issues?

DEVER: Season 1, I wasn’t really paying attention to the politics side of it. I think probably by Season 2 or 3, I started noticing that, oh, it is a huge topic of discussion on this show and that it is a big deal and it’s a big thing that makes the show. I’d say around Season 2 or 3.

AX: Do you have a favorite episode or scene that you’ve gotten to do on the show so far?

DEVER: We’ve done so many episodes at this point, but I enjoy doing the more sentimental stuff on the show, even though I love doing the comedy and I love playing the sarcastic Eve. I don’t remember the season, but Eve and Vanessa had some sentimental moments, like when I broke up with my first boyfriend or I got dumped. Those sorts of sentimental scenes I enjoy, because it breaks up from the comedy for a second and allows the audience to sort of simmer down and get into the moment. Those are my favorite things.

AX: Do you go back and watch episodes from the first few seasons?

DEVER: Yeah. I feel like some of my friends have problems watching themselves when they’re on TV. I find it helpful. Even if I was to go back to a lot of my Season 1 stuff, it really helps me as an actress now playing the character now, now that she’s older. It definitely is helpful, and I don’t mind watching myself – I think it’s good to watch.

AX: Have you done any research, either for Eve or for other characters you’ve played?

AX: You’ve done both high comedy and intense drama. Do you have a preference between them?

DEVER: Since SHORT TERM 12, I did the last season of JUSTIFIED, which was pretty intense and I was doing a lot of intense scenes with Sam Elliott, which was a dream come true, but as of right now, I do love drama and I do love comedy, but I’m sort of trying to balance drama and comedy out. I just did Shakespeare. I was in London for two weeks.

DEVER: I didn’t do a play, but I did a program and that definitely took me out of my comfort zone. And I enjoyed that. I really do enjoy doing different things. I want to do an action film at some point.

AX: What would you most like people to know about Season 5 of LAST MAN STANDING?

DEVER: The characters are going to change in big ways, I think. Especially for my character Eve, she’s coming out of high school and she’s dealing with conflicts as a teenager, but also dealing with the expectations of her parents and the expectations of her friends and who she wants to be as a person. So there’s a lot going to happen in Season 5.

This interview was conducting during a set visit arranged by ABC for the Television Critics Association.