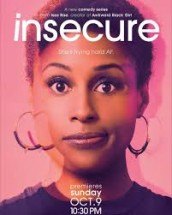 The creator/star talks about her new series 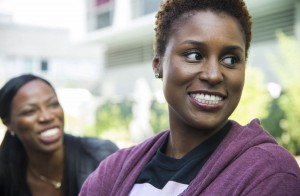 As a writer, director, producer and actress, Issa Rae has done a number of projects, including two seasons of THE CHOIR, but she became famous for her Internet series THE MISADVENTURES OF AWKWARD BLACK GIRL.

Now Rae has created and stars in HBO’s new Sunday-night comedy series INSECURE. Rae plays Issa Dee, who has some awkward adventures of her own in and around Inglewood, California, where INSECURE shoots on location.

ASSIGNMENT X: Is INSECURE an expansion of MISADVENTURES, or is this completely topically different?

ISSA RAE: It’s a completely different show. AWKWARD BLACK GIRL – the comedy was kind of larger than life, caricature-y. This one is more grounded in reality, closer to my life. Different shows, but some of the same themes.

AX: As you developed this comedy persona, where does she intersect with you, and where are you totally different from her?

RAE: In a sense, she is me. We haven’t made a lot of the same choices at all, but at our core, we’re the same.

AX: Do you feel that there’s a responsibility for someone to depict an ordinary black woman, as opposed to either the Shonda Rhimes heightened heroines or the network half-hour comedy wives?

RAE: Yeah. I think there’s room for both. I think that there’s room for the superheroes and the superwomen, and we wanted to focus on those who aren’t quite there yet and don’t have it all together, because that’s who I know. It depends on the kind of stories you want to tell. I think in those instances, it works for heightened drama, and for these, we’re telling a low-maintenance story, if you will.

AX: Can you talk about shooting in Inglewood, California?

RAE: For me, it was growing up there, and living life, dating, making friends in those areas, and seeing those places on television, and seeing them being shot up or with drugs, and not knowing that to be my own experience, and wanting to show the different side of it. That was extremely important to me. Because some of the best people that I’ve ever met live there, and I want to showcase that.

AX: Do you have location issues shooting in Inglewood? It seems like production would sometimes be competing with traffic and construction …

RAE: And street noise, yeah. A lot of noise. A couple of scenes, we were like, “What the heck? Come on. Did we shoot this on the freeway?” But for the most part, the city has been generous, and especially Inglewood, in terms of allowing us [to shoot the series]. We only had one incident with the LAPD where they just shut down production in one of our neighborhoods, but for the most part, it was incident-free.

RAE: Oh, stopping and holding for a plane? Yeah. We limited our exterior scenes [laughs]. We can say that.

AX: Sujata Day, who played your best friend in AWKWARD BLACK GIRL, is now playing your frenemy in INSECURE. How is playing opposite her in this new way?

RAE: It is a little strange, but it’s hilarious. To see Sujata play her bitchy role cracks me up. But I’m so glad. A lot of the actors were able to take the journey with me, and they’re all in these varied roles, and it’s fun to see us all grow together.

AX: Would you recommend going on the Internet for new content creators?

RAE: Hands down. I think that there are so many platforms and so many opportunities to express yourself and make a name for yourself in terms of expressing your voice and finding a new way to tell stories.

AX: What was the biggest learning curve for you, transitioning from creating your own content for the Internet to working within the bigger show business system?

RAE: Honestly, the development process, just because I’m so used to, “I have an idea, I’m going to tweak it, I’m going to put it out there, it’s out there.” And then this is more, “I have an idea …” There are other voices helping me tweak it and it may take longer than I want, and I’m very impatient and impulsive, and so dealing with that, but the finished product and what we’ve built together is just hands down amazing, probably one of the best things I’ve done.

AX: Have you had any major creative differences with HBO, where there’s been something that you’ve said, “No, it really does have to be this”?

RAE: [laughs] Not yet. No. I mean, I think the biggest thing we had was to push the most controversial moment in the series sooner, and there was initial resistance, like, “Come on, what?” Then it was, “Oh, that makes sense.” And it made the show better. But nothing like, “You’re wrong!” Not yet.

AX: Do you think that HBO and networks are more inclined to listen to diverse voices now than they may have been in the past?

RAE: I really can’t speak to that. I know my own experience has been, as soon as the ABC door shut, I got a call from [HBO executive] Casey Bloys to say, “Hey, what else do you have? What other ideas do you have that you want to pitch to us?” And since then, they have been completely open, about just making sure that the voice has been authentic, making sure that I’m telling the story I want to tell, and I couldn’t ask for a better partner.

AX: Can you talk a little bit more about the specificity versus the universality of the comedy in INSECURE?

RAE: I’m focusing on the specific first, because I think that’s where the authenticity comes from, and these real moments that we each have – I can honestly say that every writer has a piece of their life, or a story, or a chunk taken and put into the show, and so that’s where the specificity comes in of these unique human experiences, and then viewers watching can relate.

AX: Do you have those discoveries in the writing room, where there’s something you thought just happened to you, and it turns out to be a shared experience?

RAE: Completely. The writers have been so incredible. It really is like a dream team of people behind the scenes. It’s what they’ve contributed, and it’s what they’ve brought to the table. Those moments happen all the time.

AX: Are you prepared for all the kinds of conversation that may come up around INSECURE, good and bad?

RAE: I don’t think I am, to be honest [laughs], because I used to read all the comments for AWKWARD BLACK GIRL. I wouldn’t respond, but I’d read them, and take it in. But I think I’m aware that more people will be watching, and because we’re doing a show about black women, we’re not saying that we represent all black women at all. I know that that’s going to be a topic. I know that people are going to go, “Well, that’s not my experience, I didn’t go through that.” And it’s not necessarily meant for everyone. Everyone isn’t going to like the show. So I’m fine with that – I’m just not ready to read about it all the time.

AX: What were the shows or the films that were the most influential for you in the creation of INSECURE?

RAE: I’ve always been influenced by CURB YOUR ENTHUSIASM and SEINFELD and 30 ROCK. And film-wise, LOVE AND BASKETBALL, just because it was such a regular black love story, it was set in my neighborhood. But I think for the most part, I can’t think of any other shows that this show is like.

This interview was conducted during HBO’s portion of the summer 2016 Television Critics Association press tour.