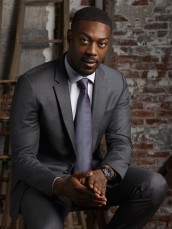 The actor talks about his his new TV show 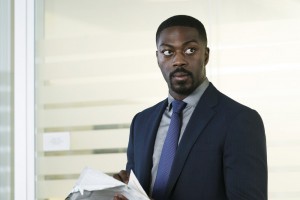 In USA Network’s new Thursday-night science-fiction drama FALLING WATER, several people find themselves going in and out of each other’s dreams, which in turn seem to affect reality.

Created by Gale Anne Hurd and Blake Masters and Henry Bromell, FALLING WATER centers on three specific dreamers. David Ajala plays Burton, a man of action whose jobs, past and present, are dangerous and mysterious. He winds up seeking his missing lover in the dream world, just as Tess (Lizzie Brochere) is looking for the young son she’s never met and Taka (Will Yun Lee) copes with his ailing mother.

Ajala, the English actor who also recently costarred in the series BEOWULF: RETURN TO THE SHIELDLANDS and BLACK BOX, and appeared in FAST & FURIOUS 6, talks about FALLING WATER first during a Q&A session and shortly thereafter in a brief, more private conversation.

Although much of FALLING WATER takes place in the dreamscape, Ajala says, “I mentioned this to Blake awhile ago. I think the concept of the storytelling, which we introduce to audiences, is going to be rooted in a real reality. It’s three characters who have a very simple yet profound experience with their dreams. I think, once you have a foundation of solid real people that you can relate to, that’s the seed to sow for storytelling on so many different levels. I think that’s the exciting thing. It feels like we’ve sown some really solid seed that are going to bear some very juicy fruits.”

Regarding his character, Ajala relates, “I suppose that the bridge for Burton is, he’s ex- S.A.S. [British Special Air Services], who is now head of security at a financial institution. And he has this really passionate, fleeting relationship with this woman, who he loves really dearly. One day, he wakes up and she’s not there. And he has to get to grips with trying to work out if she exists in his dream world, or if she exists in his waking world. And I think, for him, he is fully in belief that she exists in his waking world, but then as the series goes on, he has to face many different obstacles which challenge the truth.”

Has FALLING WATER caused Ajala to take more interest in his own dreams? “I think I paid more attention to my dreams, definitely. There’s one dream specificallyI can remember. It was last year, when we finished the pilot and we went in to find out if we were going to get picked up for a fully season, and I had a dream that I was in an auditorium, and the show runner from a show which I worked on previously, she told me that we were picked up to season for FALLING WATER, and [Masters] called two days after with the news. That was one of the sweetest dreams.

Ajala notes that his role in FALLING WATER can be very intense, physically and emotionally. “It’s funny. I remember being in Los Angeles earlier this year, and I was in the writers’ room with Black, and we were just discussing ideas for the season. One thing that Blake was interested in doing is taking Burton on a real journey on many, many levels. We recently shot some [scenes], and every time we were getting close to the episodes and Blake would mention it, he would always mention that he wanted to break Burton down. There’s always a gleam in his eyes, and I wonder how much he likes me. The stuff that we shot recently was some of the most physically demanding, spiritually challenging stuff I’ve done in a very long while, but it was awesome. I came out on top, so I’m very grateful for that.”

What would Ajala most like people to know about FALLING WATER?

“I think the most important thing I want them to know about FALLING WATER is, it’s a show that’s going to sow a seed to challenge our understanding of our dream worlds, and hopefully, to embrace our dream worlds.”

This interview was conducted during USA Network’s portion of the summer 2016 Television Critics Association press tour.