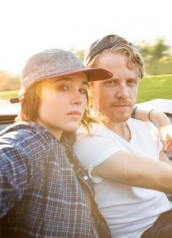 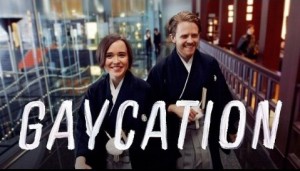 Spike Jonze, known for being the creative director behind such films as BEING JOHN MALKOVICH, ADAPTATION. and HER, now has “creative director” of Viceland, a new cable network dedicated to documentary series about unusual topics.

One of Viceland’s premiere series is GAYCATION, Wednesday nights, from producers Ellen Page (the narrative feature FREEHELD) and Ian Daniel. Page, who is also an actress (FREEHELD, JUNO, Kitty Pryde in the recent X-MEN movies), and Daniel explore LGBT culture – and the reaction to it – in various cities around the world, bringing their personal perspective as members of the community to bear on their observations.

AX: What kinds of experiences do you have in your travels?

ELLEN PAGE: Lots of different things. Of course, we have fun. We learned so much, it can be incredibly humbling, it can be nerve-wracking. We have gotten even closer, which is hard to imagine, because we’re as close as two people could possibly be, so I’d say mostly, I feel like I’ve learned so, so, so much. I’d say that would be the big takeaway.

PAGE: No, I don’t even know if it’s ever that. We went to Japan, because I did not know much about the LGBT culture in Japan. I’d been to Tokyo a couple times, but both times, I was very closeted, so I wasn’t going to the gay district, so really, of course we talk about different countries, and we narrow in on which ones we want to go to. [turns to Daniel] have a better way of …?

IAN DANIEL: That’s good. I think on some level, it’s about choosing countries where we know people have one image of it – like Brazil, for example, it looks very progressive in terms of sexuality and sexual expressive, Carnivale. We have images of that that represent an outgoing personality, outgoing sexuality, but I think, in reality, there are a lot of issues with LGBT people there. The murder rates are really high, transgender women and men have big difficulties there. So I think it’s about showing things that people don’t know about, but I don’t think we’ve really figured out – there’s not a criteria. It’s what’s interesting to us, is there a place that we can really explore and go deep into a country? Things like that.

AX: Do you think GAYCATION would be very different if you had made it before you came out?

PAGE: Well, if I wasn’t out, I wouldn’t make a show like this. That would be absurd. But I think it’s more that, in coming out, it frees you up creatively to explore aspects of yourself and aspects of what you want your creative adventures to be in life, get to be so much more, so much more authentic, and needless to say, be filled by so much more passion. Whereas if you’re living a closeted life, a lot of that gets smothered.

AX: How would you describe the tone of GAYCATION?

PAGE: Each country’s very tonally different. I wouldn’t say there’s a tone that necessarily would take the four episodes into account. Each episode is different, of course. Naturally, it’s about the journey that the LGBT community has taken, the present difficulties and situations for a lot of people in the community, and essentially where everyone’s going – politicians who might be against LGBT equality, and politicians who fight for LGBT equality, and so essentially trying to create a balance of essentially everything that contributes to the way of life for the community in each country.

DANIEL: Well, tonally, it appears very serious potentially, but also intellectual and political, and I think that is a big component, but also, we’re two friends, and we are on some level on a vacation and trying to have fun. So there are a lot of fun moments, there are funny moments between us that I think people want to see.

PAGE: And what it means to be gay, traveling. I think a lot of people don’t always necessarily think, unless you’re an LGBT person, about what it means to travel when you’re gay. You have to be mindful of where you’re going, and it could be a place that you think is totally acceptable – there’s a certain country we went to that people are shocked when they find out the degree of difficulty there for people. It’s not something they’ve heard of. So I think that’s an element of it, too, because we haven’t really seen travel shows necessarily – correct me if I’m wrong, I haven’t – that are about the gay experience traveling.

AX: Are there also countries where there’s a more upbeat gay scene?

PAGE: Yeah. In every place, except for maybe one place we were, there’s an incredibly vibrant gay scene. America still has struggles and difficulties, despite the amazing recent Supreme Court decision [legalizing same-sex marriage], and obviously that’s a lot of what the American episode is about, the issues that we’re still facing, and other countries are the same. There are still difficulties and struggles, some very severe, some less so, but of course, there’s still a very vibrant LGBT scene.

AX: What would you most like people to know about GAYCATION?

PAGE: I feel like I’d love for them to almost not know and just go in with their hearts and minds totally, radically open, and be ready to be hopefully deeply moved and deeply excited and hopefully inspired, because I certainly had an experience that inspired me, and I hope that can translate to others watching.

The interview was conducted during Viceland Network’s portion of the most recent Television Critics Association press tour in Pasadena, California.