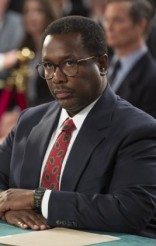 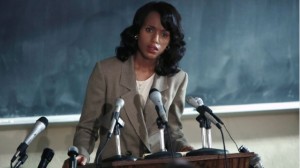 Rick Famuyiwa (whose feature helming credits include DOPE and THE WOOD) is the director of HBO’s new film CONFIRMATION, premiering Saturday night, April 16. CONFIRMATION is a drama, written by executive producer Susannah Grant, about the 1991 Supreme Court confirmation hearings for Judge Clarence Thomas, played in the film by Wendell Pierce. Lawyer Anita Hill, played in CONFIRMATION by executive producer Kerry Washington, came forward at the time to testify that Thomas had sexually harassed her when she previously worked for him.

Famuyiwa gives an exclusive interview to Assignment X about his take on this controversial chapter in American history.

AX: How aware were you of Anita Hill’s testimony about Clarence Thomas during the 1991 confirmation hearings?

RICK FAMUYIWA: Very aware. I was a political science major before I took up film, so this was the first semester that I was in college was when all of this sort of exploded onto the media. So I was already aware of it, because I was interested in the Court, and who would get nominated after Thurgood Marshall, but obviously, after Anita Hill surfaced, it became this really crazy reality show. So I remember it vividly.

AX: Were you instrumental in putting the CONFIRMATION project together, or did the project already exist and then you were brought on to direct?

FAMUYIWA: Yeah, Susannah Grant, Kerry Washington and [their fellow executive producer] Michael London had been shepherding the project for many years. They saw the ANITA documentary at Sundance and this was a project that they were putting together for awhile before I got involved. But obviously, once I read Susannah’s script and met the people involved, I was excited to be a part of it, and bring my own point of view to the story.

AX: How did you settle on Wendell Pierce to play Clarence Thomas, because a lot of the characters he plays have this sort of gentle presence, which is unlike most people’s idea of Thomas?

FAMUYIWA: Yeah. Wendell is always who I wanted and saw in this role, precisely because of that, because of the humanity he brings to all of the characters he plays, and people, whether for him or against him, have such extreme ideas about Clarence Thomas. Particularly because of what happened during his confirmation and whatever rulings he may have been a part of, I wanted to make sure you had an actor with the level of nuance and heart to get to the fact that this is a human being at the end of the day, despite what you may or may not think about him politically, or his judicial philosophies, or anything else. So I felt like Wendell was the perfect person for that, precisely because of his heart and his humanity.

AX: You wanted to cast somebody who had an innate likability to pull against some of the things, both that have been said about Thomas, and that he has said and done as a Supreme Court justice, that have disturbed a number of Americans …

FAMUYIWA: Yeah. You think about some of that stuff, but I think ultimately it was about [Pierce’s] skill as an actor, and the diversity [of his performance], and I’ve worked with Wendell before [on the feature BROWN SUGAR], so I knew that this was something he would rise to, so I was pretty excited about having him.

FAMUYIWA: Well, I think it’s an exploration into a watershed moment in our history, both in terms of media and politics. I don’t know what they’ll take away, but I definitely feel like we were fair. I wanted to tell a story that was as balanced as it could be, given the circumstances, and hopefully they see that, but I think people are going to take away, in the same way as we watched the confirmation hearings, we all had our own personal feelings about it, I think people will have those same things as they watch the film.