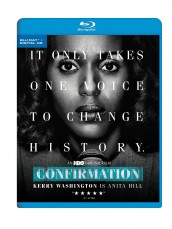 The actor talks playing Clarence Thomas in the Emmy-nominated telefilm

Wendell Pierce stars as Clarence Thomas in HBO’s telefilm CONFIRMATION, which is Emmy-nominated for Outstanding Television Movie and Outstanding Lead Actress in a Limited Series or a Movie for Kerry Washington’s performance as Anita Hill. In the fact-based CONFIRMATION, scripted by Susannah Grant and directed by Rick Famuyiwa, we see what happened during Thomas’ 1991 Supreme Court confirmation hearings, when Hill came forward to say that the judge had sexually harassed her when she had previously worked as his assistant. Most people know the outcome of those events, but the controversy remains, years later.

Pierce, who costarred in the film SELMA, was a series regular in THE WIRE, TREME and THE MICHAEL J. FOX SHOW and recently had arcs on SUITS and RAY DONOVAN, is often cast for his warmth. Clarence Thomas is therefore not necessarily a character one would associate with Pierce. However, the actor explains, there’s more to the conservative Supreme Court justice than we might expect in CONFIRMATION, newly-released on home video.

ASSIGNMENT X: How aware were you of the period covered in CONFIRMATION when it was actually happening?

WENDELL PIERCE: Oh, I was very aware of it. I followed it closely. It was such a seminal moment in political history, in our cultural history, to see the nation have that discussion. It was disturbing and engaging and was quite memorable.

AX: Did you have to detach yourself from your personal opinion of Clarence Thomas?

PIERCE: Yeah. I didn’t want to prejudge or bring my opinions about him to it, I wanted to put myself in his shoes and find out what it’s like to be at the pinnacle of your career and have something come back from your past to challenge that, to think about being in that position and wondering if you even remember it, and if you remember it the right way. And I’m sure that he has to consider, “Did something like that happen, or did that happen? I would never do anything like that, and if I don’t remember it, what does that say about me? If I’m sure that I didn’t do it, why would she do that when I helped her?” So that just gave me so much fuel to play, because it’s really about a personal journey, and I thought, “The more authentic I am about going through his personal journey, not his political journey, the more authentic and impactful the piece would be.” Then it’s left for the viewers, the audience, to look at it and come up with their own opinions. I ultimately can have my own opinion about it, but I couldn’t allow whatever that was, one way or the other, to come into the creation of the role, because that’s my opinion, that’s not his. Ultimately, that doesn’t serve the piece, that doesn’t serve the film.

AX: Have you ever been confronted before this with playing a part where you had your own opinion of who that person or character was, and then had to set those opinions aside in order to play the role?

PIERCE: No, this was the first time. It’s no secret that the justice and I have differing political views. This was the one time that I really had to put it aside. To even just fulfill the character and flesh him out, you really have to be a blank slate, and not try to bring your opinions into it, unless it serves the film. And I felt the best way to serve the film and serve the story is to approach it from that aspect, to be in a position he was in, wondering what happened in the past, because I think that has to be an element. If something that happened a decade earlier, with someone you still have a relationship with, if you remembered it or not. It served me better if I chose to have to struggle to try to remember it, to struggle to try to remember which line I did cross or didn’t cross. If I was certain from the beginning that I didn’t do it, if I was certain from the beginning that I did do it and I don’t care. If I was certain at the beginning that I did do it and was troubled by it, all of that wasn’t as much fuel as actually trying to struggle with what did I do and trying to remember it, so that’s what I chose to go down that path. Because that added more to play.

PIERCE: I knew immediately I wanted to do it. I knew immediately I wanted to work with Kerry Washington. I knew immediately it was going to be a challenging role, which is something that I always want to do, something that’s going to challenge me. And then to work with Rick again and to do this project at HBO – all of those were immediate yeses. As troubling, as difficult, as scary as it was, it was actually quite scary, I’m actually now to the point that I actually want to meet the justice. I actually want to have a conversation with him. I know we can’t sit and talk about this, but I would like to talk to him about his journey to his viewpoints. I would like to find out what those personal things [are] that happened in his life. It’s always personal, to come to a political point of view. I would like to find out what that personal turning point was for him.

AX: You had said something to the effect that you felt Clarence Thomas was sort of pulling up the ladder behind him, in terms of him not being helpful to other black people …

PIERCE: Oh, we were talking about the policy against Affirmative Action. It closes the door on so many people behind him. He [sat] on a court with [Antonin] Scalia, who publicly said, “Wouldn’t it be better all these black students to go to lesser schools?” [Scalia] all but said that [this was because he believed black students had] small brains and inability to learn. I kind of have a better understanding of [Thomas’] rationale, because he really believes in a meritocracy. “I want to be judged just for who I am,” in the words of MLK, “the content of my character, not the color of my skin.” But it is irrational for you to think that people can be that fair and practice that meritocracy. Because they don’t. We have example after example after example. And so to put in those safeguards against that sort of narrow-mindedness and irrationality is important. And that’s what Affirmative Action is all about. How many times have we heard, “Oh, man, I would hire a black baker, but I don’t know black people who bake!”

So knowing that that is a fallibility of humans, it is naïve to believe that we can just believe in meritocracy, meritocracy rules the day and we don’t need any safeguards against prejudice and racism and sexism and homophobia and all of that. For you to believe that, you’re either just pure evil, or so completely naïve, you’re on the verge of stupidity. And what happens is, that’s why you can come to that conclusion, if you’re not stupid, then the alternative is that you don’t care. It’s like, when I think about the justice, when he came back from Yale Law School, he could not get hired by white law firms in Savannah, his hometown. And he thought it was because they didn’t honor his degree, because he got it through Affirmative Action. And I beg to differ. If he had just been accepted to Yale, and came there with a full Yale law degree, as he did, they didn’t hire him because of who he was. And it was naïve of him to believe it was because of Affirmative Action. And it’s that blind faith in meritocracy that we don’t have time for. Life is too short to be that naïve. Like my parents used to say, “There are those who don’t have your best interests at heart.”

AX: You and CONFIRMATION director Rick Fukuyima had worked together before. What was the project?

PIERCE:  BROWN SUGAR was a film with Queen Latifah and Sanaa Lathan and Taye Diggs and Mos Def. It was a love story about two kids who grew up in Brooklyn, and the hip-hop world, and they fall in love around music. And I was a music executive, loosely based on Andre Heroux.

PIERCE: That it is a thriller, that it is about more than just the “he said/she said” story. It’s really a story about how we treat each other.

This interview was conducted during HBO’s portion of the Television Critics Association press tour.