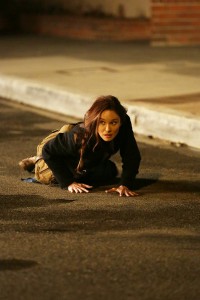 In USA’s COLONY, premiering Thursday, January 14, the Earth has been colonized by a mysterious presence that hovers over the land in huge spaceships. It seems as though no one has seen the aliens, but quite a few humans are cooperating with them. The choice to collaborate or resist threatens to tear families apart. Josh Holloway and Sarah Wayne Callies star as a couple with children who find themselves at odds in a Los Angeles that is separated from the rest of the world.

COLONY was created by Ryan Condal and Carlton Cuse, both of whom also serve as executive producers on the series. Condal, who previously wrote and produced the Dwayne Johnson-toplined HERCULES, took some time to talk about COLONY’s origins and themes.

ASSIGNMENT X: When did you and Carlton Cuse come together to create COLONY?

RYAN CONDAL: Carlton and I actually three years ago got together for the first time. We collaborated on a pilot for NBC [THE SIXTH GUN] that we co-created together and actually made – it was a Western and sadly did not get picked up, but it was the foundation of our creative relationship. So coming off that, we were talking, “What else can we do? What can we do in L.A.?” And thus COLONY was born.

AX: You’ve talked about the U.S. occupation in Afghanistan in relation to COLONY. Did you originally think you wanted to do a show about that subject and then went, “Ah, we can’t do that”?

CONDAL: No, actually, it was my fascination with World War II history that really got me interested in COLONY and I think the beautiful thing about the concept that we realized is that just like when [director] Juan Campanella came to the show, he had grown up in dictatorial Argentina. Everybody has stories about [living under a dictatorship]. When we were showing the pilot to the international distributors for Legendary as they were selling the show internationally, there was a distributor from Poland that came up to me and said, “Oh, my God, you captured my childhood growing up in the Eighties in totalitarian Poland.” We weren’t thinking about Eighties Poland at all, but the nice thing is, these themes are well-reflected across many different times and many different cultures of people.

AX: Assuming the spaceships are occupied by nonhumans – unless these really are humans who are trying to trick the population …

AX: Yes. Assuming it’s not like THE TRUMAN SHOW, does that do anything to the dramatic metaphor when the ultimate enemy is not human, or do you think that, for example, the Nazis effectively removed themselves from the category of being human?

CONDAL: I think that’s just a fascinating part of the story, is trying to humanize everything. Not just our hero, but humanizing Proxy Snyder, Peter Jacobson’s character. Understanding, yes, he’s the villain of the show, but where does he come from, why did he make these decisions, what are the complicated moralities that he’s dealing with? And every character in the show, even if they’re the occupiers, whatever they turn out to be, humanizing them and understanding that there isn’t just this hive mind and this desire to take for the sake of taking, but there is something behind it and everybody is trying to survive, everybody is trying to do well for themselves, for their loved ones.

AX: To ask a smaller question, if it’s a safe neighborhood, why do the main characters have razor wire around their back yard?

CONDAL: Well, because they have an orange tree, and it’s very valuable, and they don’t want anybody sneaking over the fence and stealing their valuable trade goods, because as [is shown] in the pilot, things that we take for granted are suddenly of great value in this world, and they are trying to protect their resources.

AX: What would you most like people to know about COLONY?

CONDAL: The thing that I’m most proud of is how we’ve been able to really tell [the story]. I think people will see the show and they’ll think that it’s a science-fiction show, and while it is, while it is told [against] a science-fiction backdrop, it really is a John Le Carre-style espionage tale, told on this canvas, and I think it’s just something that people have not seen before, and we’re extraordinarily proud of it, and I hope that fans of the spy world and the family drama world and the science-fiction world will come and watch the show.