Home » gotham damned if you do review

TV Review: GOTHAM – Season 2 – “Damned If You Do” – Season Premiere 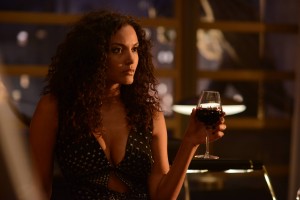 One of the more interesting things about the Season 2 premiere of GOTHAM “Damned If You Do” is how they tried to get some of the mediocre (and that’s being generous) characters actually something to do. For starters, much beleaguered Barbara Kean (Erin Richards) finally (finally!) does something. After attacking Dr. Thompkins (Morena Baccarin) toward the end of Season 1 after she became mentally unstable after being forced to kill her parents is the latest resident of Arkham Asylum and gets quickly cozy with the locals.

Later she is taken by the thugs of new boss villain Theo Galavan (James Frain), who had a hand in most of the events in “Damned If You Do.” First he drugged up a would-be villain only to actually deliver a knockout gas to those in Arkham. He kidnapped the crazies (including the Joker) and brought them to his penthouse in order to cause chaos in Gotham. Oh and hello Jessica Lucas as Theo’s sister Tabitha. Looking good girl.

Secondly, finally (finally!) they have given something for Bruce Wayne (David Mazouz) and Alfred (Sean Pertwee) to do other than hum and haw about his father dying and being a whiny little sh** throughout the first season. While there isn’t a lot happening here yet, hopefully the discovery of his father’s secret room (which looks like the beginning of the Bat Cave) will lead to more interesting plotlines for the duo although given Mazouz is so young, there is only so much Bat activities that can be done at this point. Which makes me think that this might be another terrible subplot in the long run but hopefully I’m wrong.

The main plotline of GOTHAM, however, dealt with Jim Gordon (Ben McKenzie) once again getting the shaft inside Gotham Police Department and having to work traffic. He later gets fired from the police force (again) and has to go to the new king of crime in the city Penguin (Robin Lord Taylor) (again). Now, if I remember right, Gordon had blackmailed the commissioner to become the police union lead but maybe they retconned that whole thing in order to rehash a previous plotline from Season 1.

So in order to get Penguin to force the commissioner out of his position (as only Penguin can do), Gordon must prove his worth to the crime boss by collecting money from someone that didn’t pay. Things don’t go as planned and once again Gordon is forced to comprise his principals in order to further his goals of making a difference in the long run. While this continues the tumultuous relationship between Gordon and Penguin, it is something we have seen before a few times from Season 1 and I’m not sure how many more times they can go to the well with this option.

The opening episode of Season 2 left a lot to be desired. Too many storylines rehashed from Season 1. Too many things we have seen before. While I like they are giving Barbara a chance to do something and maybe Bruce Wayne, they need to be different in what we get this season. The promise of villains rising and becoming a threat is a cool one and maybe this just sets the table for that but as far as season premieres go, this one didn’t pack a wallop.