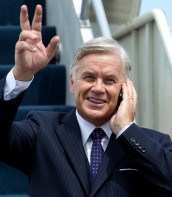 The actor chats about his first series regular role 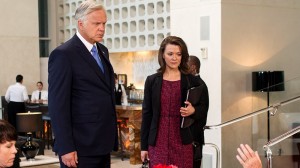 In HBO’s freshman series THE BRINK, Sundays at 10:30 PM, Tim Robbins plays U.S. Secretary of State Walter Larson. Walter is battling a hawkish government in trying to prevent WWIII from breaking out with Pakistan; he’s also got some more personal problems, stemming from his fondness from getting tied up by female sex workers.

Robbins, who won an Oscar for his supporting performance in MYSTIC RIVER and was nominated for another for his direction of DEAD MAN WALKING, has a long and renowned career on both sides of the camera in feature films, and he has appeared in some telefilms, but THE BRINK is his first time as a series regular.

AX: Were you looking at all to do television at this time?

TIM ROBBINS: Really, no. I had turned down a bunch of offers to do various series in the past three or four years and I would read scripts that just weren’t for me. This one made a lot of sense, it was with [HBO], a company that I really like and that I’d worked with a few times. I’d done a couple of TREMEs for HBO and done CINEMA VERITE recently for them. I liked the way they treat people and the script is amazing and meeting with [series creators] Roberto [Benabib] and Kim [Benabib] and [executive producer/director] Jay [Roach] was great and it seemed like a great thing to do.

AX: And how do you see your character? Is he principally defined by his political ambition, by his sex life, by his duplicity, or by his inability to rise above playground-style arguments?

ROBBINS: I would say, except for the last one, all of the first three you mentioned. He’s one of these guys who is a multi-tasker. I don’t think this kind of person lives a full life unless they are fulfilling their appetites, which are very large. And so I love the idea of playing a character like that, because he’s constantly in search of either a new way to solve a problem or to represent a certain level of sanity within an administration that could go awry, or with his dalliances with women. It’s just unrelenting.

AX: THE BRINK seems to be very politically progressive. Was that one of the reasons that you were attracted to it, because it’s one of the more overtly progressive shows, it’s pretty forthright in saying, “Let’s not bomb these people, these people actually are people”?

AX: That also seems to be the voice of the show, though. That’s the overview. Was that one of the reasons that you felt like you wanted to do this?

ROBBINS: Yes, absolutely. At this stage, I don’t have to work, so I’ve been very careful about what I do, and the script had all of that [progressiveness], but it also had a great sense of humor. And that’s for me, what’s most important, was that it operates and delivers on that level. Yes, it could have all the best intentions, but unless it works as a satire, it’s not worth doing.

This interview was conducted during HBO’s portion of the Television Critics Association press tour in Pasadena, California.